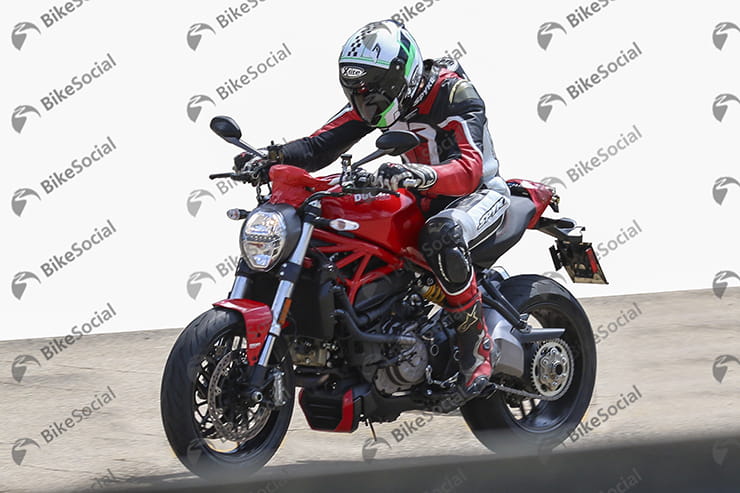 Our spy snappers have been at it again and caught a brace of new Ducatis on test – revealing that the Monster 821 is being shown the door and will be replaced by two separate models.

The existing entry-level Monster 821 doesn’t comply with the Euro 4 emissions regulations that come into force in January. Its replacement is expected to use the 937cc Hypermotard 939 engine, which is already Euro 4 certified and next year will spread to the new Supersport 939 as well.

These shots show the Monster equivalent to that bike. Like the Supersport 939, it uses the existing frame and the single-sided swingarm from the Monster 1200. The engine is visually identical to the Hypermotard 939’s, and there’s little reason to believe that its performance will differ significantly from that bike. In the Hypermotard, the Euro 4 engine makes 113bhp – just 1bhp more than the Monster 821. A single horsepower gain from an additional 136cc illustrates the power-sapping effect of the new emissions rules.

There will be a useful performance boost, though, as the engine’s torque is significantly higher at 72.2lbft instead of 65.8lbft.

In terms of styling, it’s largely familiar Monster territory although the headlight has gained a refreshed appearance with an LED strip in its centre. The front indicators are repositioned and the seat has been reshaped, too. Camouflage around the instruments hints that they’re also subject to a redesign.

While the performance may not represent a huge leap forwards compared to the Monster 821, the new bike’s price is likely to jump quite noticeably. The addition of the single-sided swingarm from the Monster 1200 shows how the machine is being positioned higher in the range, and as such it’s leaving a hole in the range for an entry-level Ducati that isn’t as blatantly retro as the hugely successful Scrambler line-up. 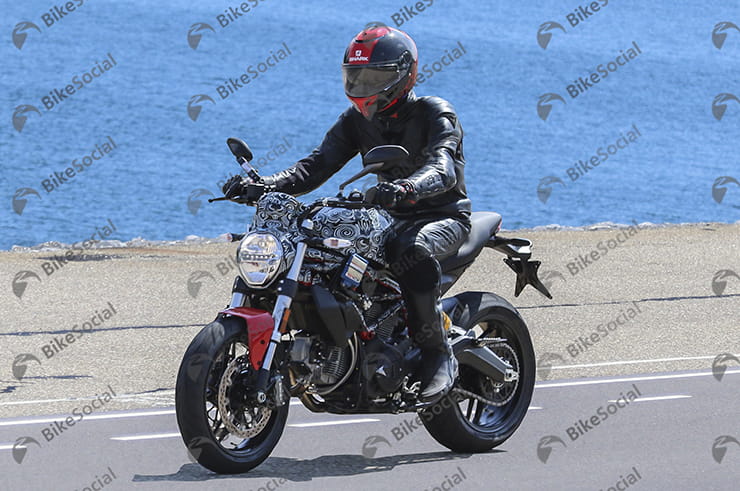 That’s where the second of the new bikes comes in. It’s instantly clear from the spy shots that it uses the air-cooled, 803cc V-twin from the Scrambler as well as its swingarm and rear suspension, but the chassis and styling are new. The forward-hunched fuel tank and complete lack of bodywork around the seat are clear Monster styling cues, indicating that this model will be part of that legendary range. It also gets the same headlight as the Monster 939.

The new frame is simpler than recent Monsters, losing the aluminium section near the swingarm pivot. The trellis itself is newly designed and appears to be stronger than the Scrambler’s, with more steel tubes and bracing.

The wheels, brakes and forks all look much like the parts from the existing Monster 821, which makes sense if the bike is to be the new entry-level Monster.

Presuming its engine is a straight port from the Scrambler, the bikes performance will be a league lower than recent Monsters. In 803cc form the air-cooled engine makes 75bhp, and its use also opens the door for a smaller 399cc version with only 41bhp. However, Ducati used to do a roaring trade in small-capacity Monsters – including the old 63bhp Monster 620, and before that the 53bhp Monster 600. There was even a Monster 400 offered in some markets back at the turn of the millennium, with a 43bhp air-cooled motor.

While the new Euro 4 rules come into force in January, Ducati might not have these bikes ready in time for that. In America the firm has already started listing the existing Monster 821 as a 2017 model on its emissions certificates, and there’s currently no emissions listing for an 803cc or 937cc Monster. That means these machines might not be ready until later in 2017. 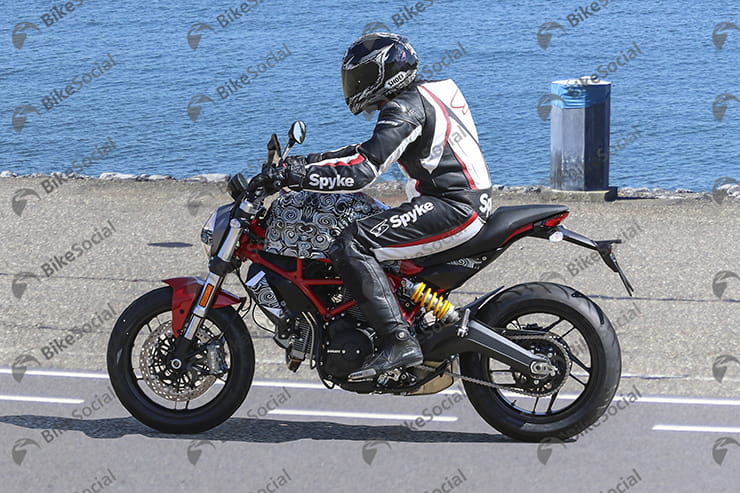