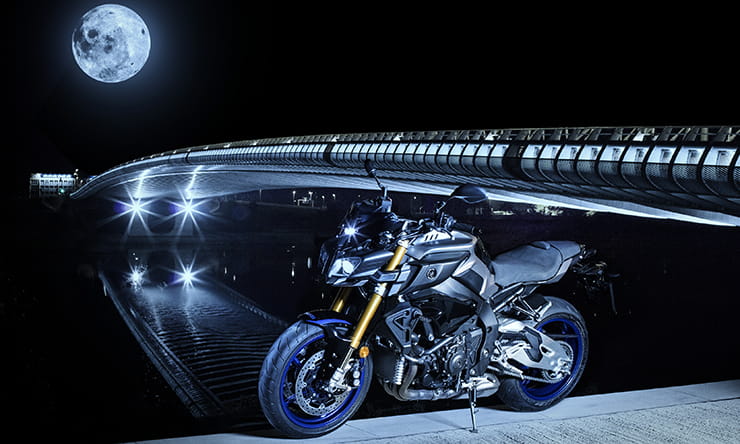 As if the 160bhp inline four cylinder Yamaha MT-10 unleashed into dealerships last May wasn't epic enough, the Japanese manufacturer has announced an SP version of the R1-derived super naked at Intermot, the Cologne-based motorcycle show, today.

With a heap of R1 trickery thrown at the already highly accomplished streetfighter, the new MT-10 SP, which is available from February 2017, should be commanding the headlines once again.

The 998cc Yamaha’s high-tech suspension uses a Suspension Control Unit (SCU) which analyses data from a series of sensors which allow the suspension to react to the riding conditions, which the company claims offers an optimal set-up at all times.

The Silver Blue Carbon colour scheme is your only option on the SP model, while the MT-10 itself gets a few tweaks for 2017. The updated version will be available from UK dealerships in February and features a new quick shifter as standard – allowing clutchless upshifts. It also has had revised engine mapping offering smoother throttle characteristics tight through the already mighty rev range.

Expect the prices of the revised MT-10 and the new MT-10 SP models to be confirmed next month.