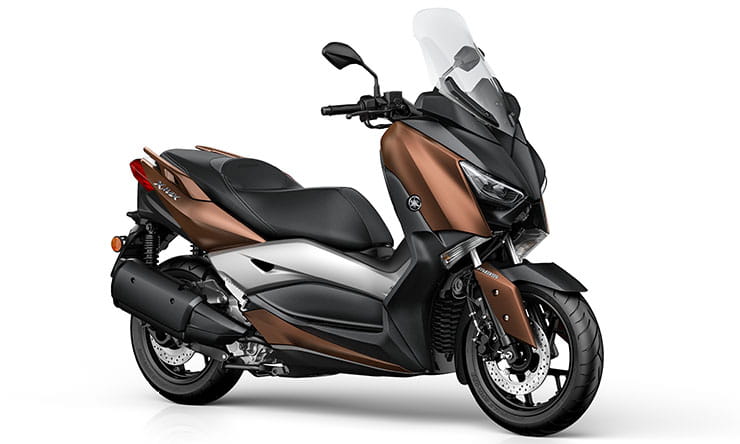 Yamaha’s assault on the European scooter market looks set to continue with the introduction of the new X-MAX 300 for 2017.

The 300 replaces Yamaha’s long-running X-MAX 250, which has racked up an impressive 130,000 sales in its 11-year history, and features an all-new Euro 4 compliant single-cylinder motor which is claimed to offer more top speed and acceleration than the old 250cc unit, while delivering improved fuel consumption and more refinement.

While the market for big scooters is relatively small in the UK, they’re hugely popular on the continent – which is why it’s no surprise to see Yamaha go to town on the new X-MAX. The four-valve engine is full of what Yamaha dub ‘Blue Core’ technology, which is marketing speak for, erm, technology. In line with other manufacturers’ strategies to meet the stricter Euro 4 regulations, which cover both noise and gas emissions, the company has worked to minimise mechanical losses, with an offset cylinder design and a DiASil cylinder with an oil jet piston cooler. The new fuel injection system features a 12-hole injector that sprays the atomised fuel towards the back of the valve head for efficient combustion, while 3D mapping controls the fuel volume and ignition timing to deliver what Yamaha claim is excellent rideability and good fuel efficiency.

It’s not just the engine that’s been given a makeover. The X-MAX 300 has loads of spec that should make it an excellent urban commuter. There’s a keyless ignition system, 12 volt charging socket and an underseat storage area that can take two full-faced helmets and which has been designed to be wide enough to take a laptop.

It looks great on paper, with sharp new TMAX inspired styling and twin-eye LED headlights. It should be pretty decent out on the open roads too, with a switch to motorcycle-style telescopic forks with a triple-tree style arrangement, as well as ABS brakes and a traction control system.

The X-MAX 300 is expected to go on sale in March 2017 and will come in three colours, white grey and bronze. No prices have been set, but Yamaha UK says that these should be available when the scooter gets its British premiere at next month’s Motorcycle Live show at the NEC in Birmingham.