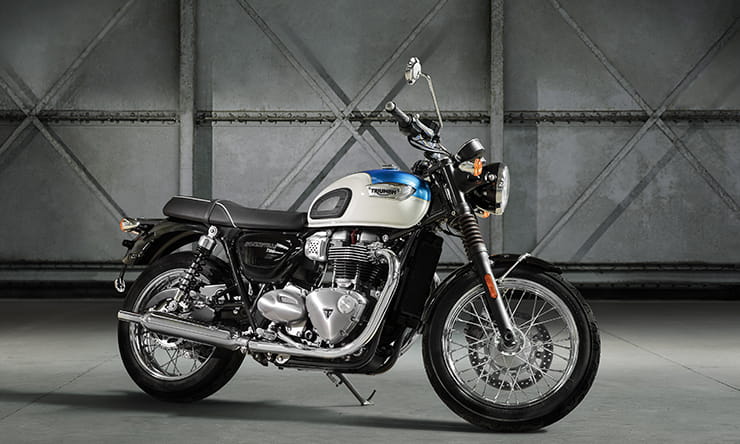 Triumph’s new Bonneville has now been made even more accessible with the new 900cc twin-powered Triumph T100.

Using the 900cc motor from the Street Twin but in the Bonneville T120 chassis, the new Triumph Bonneville T100 and T100 Black feature the Bonnevile’s classy touches and styling, but with a smaller engine instead of the 1200 lump.

Triumph has had one of its best years ever in terms of sales thanks in part to the classic range, making some 60,000 bikes a year, and the new T100 is set to boost that success further.

The new liquid-cooled, eight-valve, 900cc-powered T100 and T100 Black are lighter and easier to manage than the T120 Bonneville, but still cut that cool vibe of the bigger bike.

They feature the 270-degree crank for big power pulses and that classic Bonnie feel. The motor puts out 54bhp as standard at 5900rpm, and makes 59ft-lb or torque at 3230rpm.

It still keeps the big bike features including traction-control, ride-by-wire throttle, an LED rear light and a Thatcham-approved engine immobiliser, not forgetting the classic lines of the 14.5-litre fuel tank, a Bonneville detailed engine plate and stylish twin clocks, but with the friendlier motor.

There’s a new seat too with deeper foam for more comfort and full piping and detailing.

The T100 is available in blue and white, orange and white, or jet black. All the T100s feature hand painted coach lines on the tank.

More than 150 Triumph official accessories are available and an A2 licence restricted version is set to be released in the spring, further extending the accessibility to new riders.