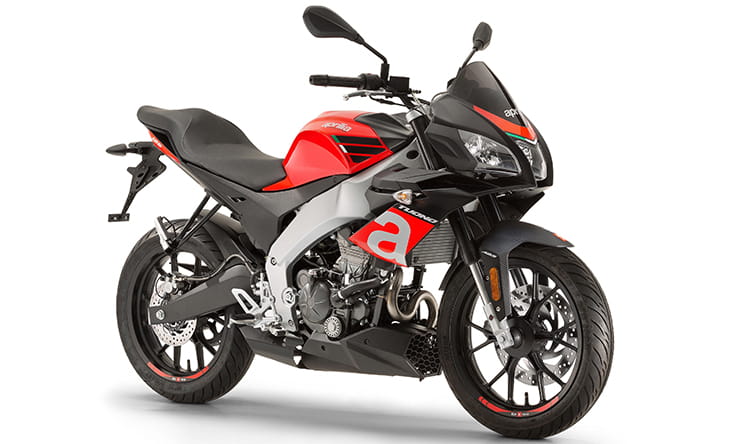 Aprilia has taken the fairings off its 125cc RS4 to create a new mini streetfighter in the form of the Tuono 125.

Aping the style of the bigger V4 RSV4 Tuonos, the 125 version will go head to head with the Yamaha MT-125 and KTM Duke 125 in the naked L-plate sector.

At the heart of the Tuono 125 is the jewel-like four-stroke, four-valve fuel injected motor from the RS4 although, being developed for an A1 licence bike means that it has been designed from the outset to deliver just 11kW, or around 15bhp.

Chassis-wise, the Tuono 125 has also inherited the sweet RS4 twin-spar aluminium frame. Never mind ‘for a 125’ it’s high end stuff in its own right with upside down forks, a four-piston radially-mounted caliper brake, Bosch ABS and six-spoke cast aluminium wheels. Where it differs from the RS4 is in the handlebars, which are top mounted streetfighter style items, rather than the extreme clip-ons of the fully-faired race replica. The Tuono is not an outright naked though, as it sports a small cockpit fairing and belly pan in the style of the bigger RSV4 version.

In addition to the introduction of the small Tuono, Aprilia has announced a number of small updates to the RS4 - making it Euro4 compliant.

If the KTM and Yamaha are anything to go by, that should make the Tuono 125 a better and more sensible day-to-day ride than the bike it’s derived from. Aprilia has always prided itself on the fact that the RS4 is a proper, full-on, eighth litre sports bike and, as a result, the RS4 has always been on the extreme side of sporty with its racey riding position. The Tuono looks like a much better city tool already and it would be no surprise if it doesn’t outsell the RS4 when it goes on sale next year.