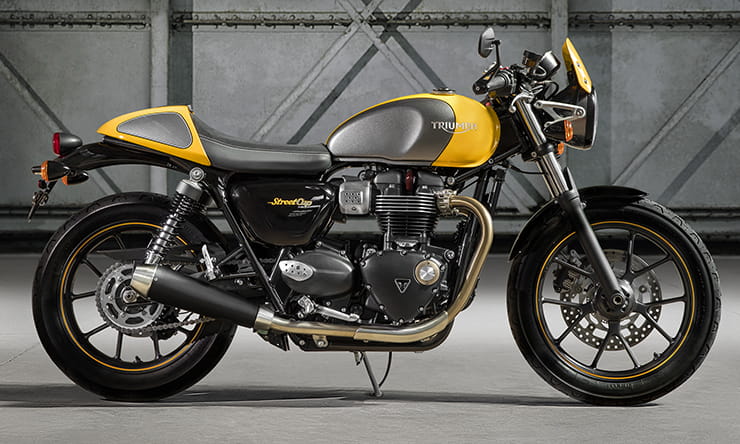 Unsurprisingly, given the popularity of the new modern classic models introduced last year, Triumph has developed two new bikes for 2017 based around the new 900cc parallel twin engine.

As well as the new T100 the Brits have created a mini-Thruxton based around the entry-level Street Twin platform.

While the frame and 54bhp engine remain as per the entry-level Street Twin, the Street Cup has been given some sporty tweaks to match its sharp new suit. The lower ace bars and new rear shocks combine to create what looks like being a sportier riding position and, while the seat height is up from the Street Twin’s cruiser-like 750mm, it remains very accessible at 780mm. The new shocks are claimed to steepen the steering angle, sharpening up the handling and no doubt creating a small increase in ground clearance.

Accessibility looks like being one of the Street Cup’s key strengths and Triumph is also making an A2 licence friendly version of its 900cc twins available in the spring, which should further enhance the appeal among younger riders.

Key upgrades between the more premium Street Cup and its basic cousin are the luxurious Alcantara style seat with a standard cowl, bar end mirrors and twin clocks, footpegs and headlight mounts taken from the Thruxton parts bin. There are also new fork protectors replacing the chunky rubber gaiters on the Street Twin. There’s also some sweet detailing, with the aforementioned hand painted coachlining, pinstriped wheels and gold coloured engine badges. There’s a welcome return to a bright yellow colour option for Triumph, a paint scheme that was synonymous with some of the Hinckley firm’s most popular bikes in the 1990s and early 2000s. The ‘Racing Yellow’ option comes with ‘Silver Ice’ contrast but, if yellow’s not your thing, there’s also a black and silver alternative.

Accessories are a big thing at Triumph and the company has a range of over 120 dealer fit options to help personalise each bike. These range from practical items like soft luggage and heated grips, though to styling parts and performance orientated parts such as full adjustable Fox rear shocks and silencers from legendary American tuners Vance & Hines. 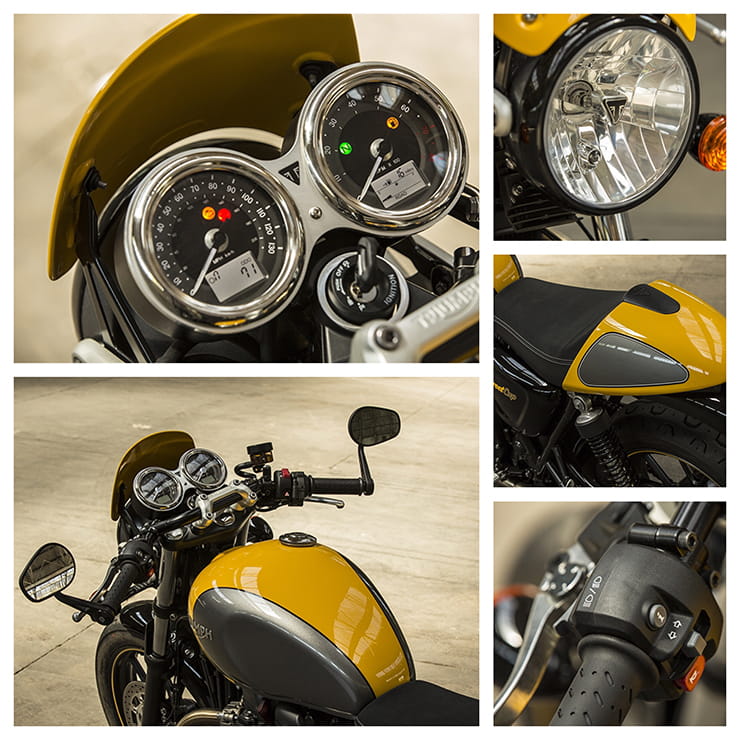