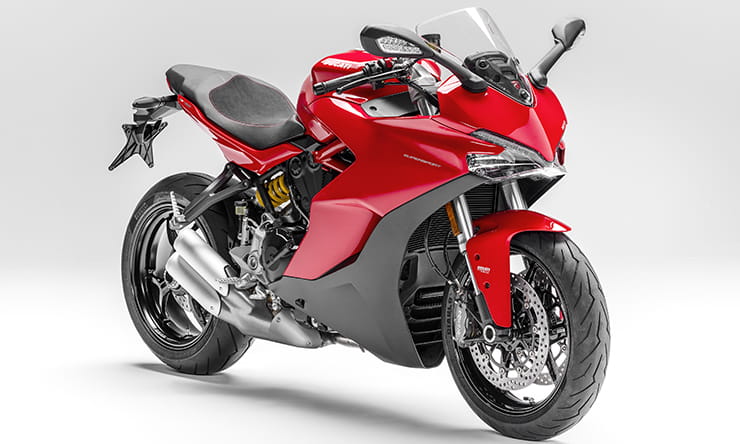 This is Ducati’s new SuperSport, a sporty all-rounder set to be one of the most exciting Ducati’s of the year.

The Italian firm chose the Cologne Show to unveil the much spied and heavily leaked SuperSport in its final version, plus a few colour changes to the Monster 821 now suitable for Euro 4 and available in a new grey colour. There’s also a 1299S with upgraded EVO version of its excellent DTC traction-control and anti-wheelie control system, and a grey Multistrada 1200S with changes to the airbox and ECU mapping to give the bike even more midrange from its Ducati Variable Timing engine. Plus a Euro4 friendly Diavel.

Other exciting new models like a smaller Multistrada and a bigger Scrambler are expected to be launched at next month’s EICMA Show in Milan.

The SuperSport uses the Testastretta motor from the Hypermotard 939, a twin-cylinder 937cc lump putting out around 113bhp. In the Hypermotard and Hyperstrada that engine offers a great blend of performance and punch without being too intimidating.

The new SuperSport continues where the old Ducati 900SS, 750SS and 1000SS left off by offering riders good handling in a user-friendly package. They were massively popular and were a great way in to Ducati’s supersport bikes without being too fierce or focused. This bike will offer the same level of excitement and will sit neatly under the £13,095 Ducati 959 Panigale. Two versions of the bike will be available, a £10,995 base model and the SuperSport S at £12,295, in red, or £12,495 in white silk. The S version has Ohlins suspension and a quickshifter as standard.

Announcing the bike, Ducati’s spokesman said: “The new SuperSport is a bike for those eager to ride sports-style on everyday roads. Fun, versatile and accessible, with true Ducati sports styling and zest, the SuperSport promises exciting, fun riding sensations while ensuring everyday comfort and easy handling whatever the roads are like. An innovative leap that, even before its debut, has won widespread support and aroused considerable interest; at Cologne, the SuperSport is set to steal the limelight to say the least.”

The frame borrows some parts from the Monster range sharing the same part steel-trellis, part aluminium frame, plus a single-sided swingarm which looks similar to the Monster 1200.

It’s set to go on sale next year.