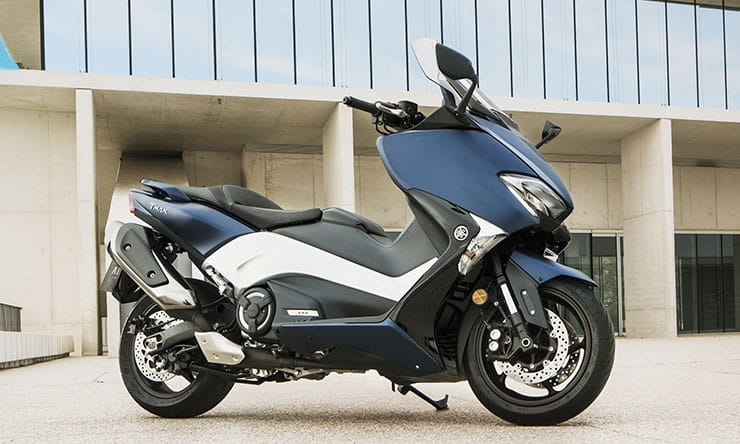 Yamaha’s TMAX, one of the most successful powered two wheelers of the millennium, has been given a significant overhaul for 2017.

Over 230,000 of the five generations of the TMAX have been sold since the model’s introduction in 2001 and the significance of the maxi-scooter was driven home at Yamaha’s glitzy VIP introduction in Milan tonight, when none other than the legendary Valentino Rossi rode the 2017 version on stage.

Three versions of the sixth generation TMAX will be available, with increasing levels of specification.

A higher spec ‘SX’ version adds riding modes, improved detailing and a new feature ‘My TMAX Connect’ which is an app that connects to the rider’s smart phone and specifically adds security features such as a bike tracker, geofencing and the ability to remotely flash the horn and hazards.

Underneath the sharper styled exterior lies an all-new aluminium chassis that carries the 530cc parallel twin carried over from the previous generation machine, albeit tweaked for Euro4 compliance.

The TMAX is a hugely important model for Yamaha in Europe, especially in Italy, and the attention to detail on the 2017 model is stunning. Such has been the effort to shed weight that the new scooter runs a narrower, 4.5” wide, 15” rear wheel to save a kilogram of unsprung weight.

The new TMAX is due on sale in March, with prices still to be announced.