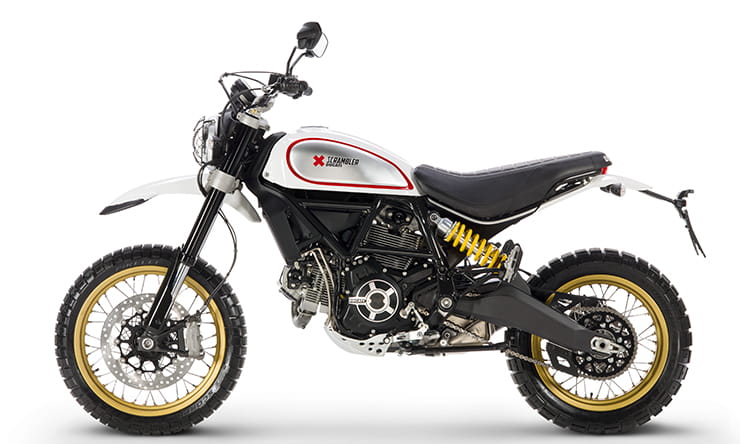 The Ducati Scrambler range keeps on growing and the Bologna firm have today revealed two more models to add to the existing batch of Icon, Urban Enduro, Full Throttle, Classic, Flat Track Pro and Sixty2. Their popularity is evident when Ducati confirmed at their official press conference that 30,000 had been sold in two years.

The two new, Euro-4 compliant machines are called Café Racer and Desert Sled and are as individual in their appearance as the other Scramblers. The two bikes will be here in 2017 and were unveiled today at EICMA, the Milan Motorcycle Show.

Inspired by the 500cc American off-road bikes from the 60s and 70s, and with a little styling help from Yamaha’s XT500 if you ask us, the Desert Sled Scrambler comes with a modified frame and suspension plus 19” spoked front wheel.

Its appearance depicts that of an off-road bike particularly with headlight mesh guard, high mudguards and engine skid plate all visual references to its potential ability.

It has a higher seat at 860mm, though a 20mm lower version is available, extended suspension travel and removable rubber footpegs all contribute to a non-conforming Scrambler riding position.

A reinforced and slightly longer swingarm, chain guard, rear sprocket fin add to the protection and reinforcement required for a little off-roading. The upside-down 46mm Kabaya forks offer 200mm travel along with pre-load, compression and rebound adjustment. At the rear, the Kabaya shock allows for adjustment of spring pre-load and rebound damping.

Available in two colours, white or red, both have a black frame and spoked wheels with gold rims plus Pirelli Scorpion Rally STR tyres on its 19” front and 17” rear wheels. 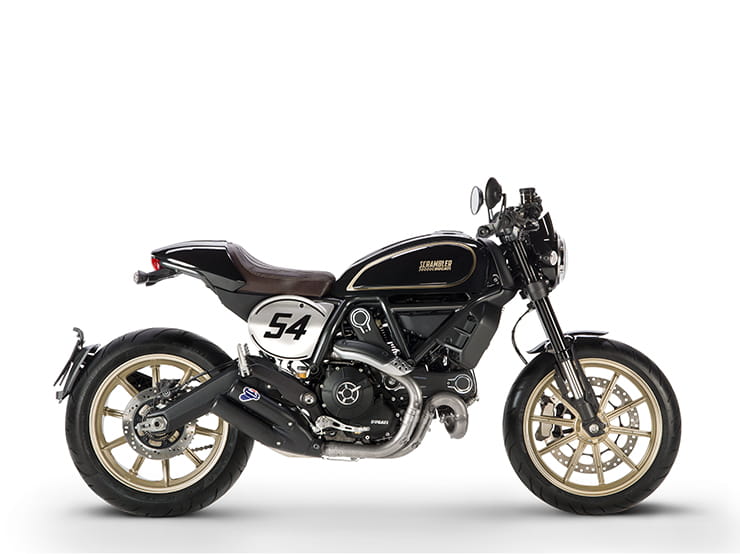 The second of the two new Scramblers to be given their official unveiling today is the Café Racer, a name that has enjoyed becoming globally popular from the back street customisers to a range of official manufacturer production models or commissions.

Ducati’s version doesn’t disappoint in the styling stakes either, the ton-up boy culture has a lot to answer for.

Smart Termignoni exhausts with dual tailpipes plus nose fairing and a short, stubby mudguard all contribute to the appropriate styling references back to the 1960s Great Britain.

But why the number 54 on the side? The Ducati Scrambler Café Racer designers wished to pay tribute to a highly successful 1960s Italian road racer named Bruno Spaggiari who raced a single-cylinder 350cc Ducati.

No prices have been officially confirmed, but we understand that the Cafe Racer will retail for £9395, with the Desert Sled coming in at £9495.