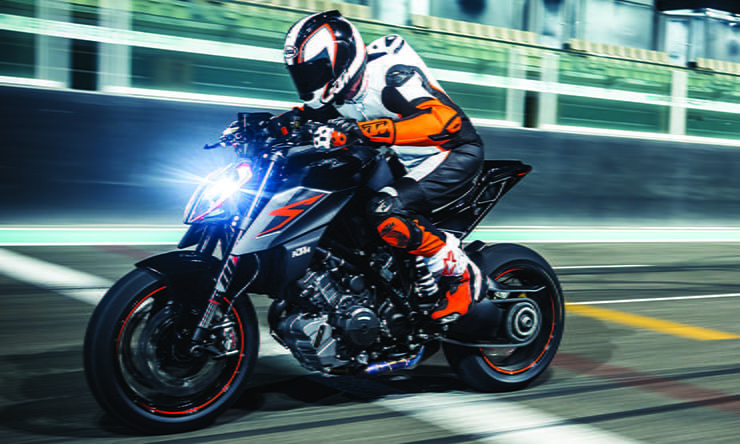 KTM’s insane 1290 Super Duke R looks set to take another step up the craziness scale after the Austrian company unveiled a new ‘Version 2.0’ of their range topping super naked.

Updated to meet new Euro4 emissions regulations, KTM are claiming a 4bhp increase in the 1301cc V-Twin’s output to 177bhp, while the chassis, electronics and bodywork have also been given a serious overhaul.

The new bike features a new transponder key system, cruise control and a smart new TFT instrument display. Handlebars are lower and wider, with the excellent Bosch cornering ABS system being carried over from the previous version. Chassis-wise, the frame remains the same, although what’s been bolted onto it has all been updated. WP’s new 48mm ‘split’ forks feature stiffer springs and a sportier set-up, with separate damping circuits on each leg – compression on one and rebound on the other – while a stiffer rear shock should also make the bike that KTM dub ‘The Beast’ a sportier feel. That’s been reinforced by the choice of original equipment rubber, with the previously specified Dunlop SportSmart2 all-rounders being dumped in favour of some hardcore Metzeler M7RRs.

But it’s in the electronics department where the old bike was most heavily criticized, and where a healthy amount of development work has gone into making the 2017 bike more emancipated.

Critics of the previous models felt that the electronics were too restrictive and difficult to bypass. In response, KTM’s boffins have thrown the kitchen sink at the latest version with updated systems and a pair optional ‘packs’ – the Performance Pack and Track Pack.

The Performance Pack features a quickshifter and KTM’s new KTM MY RIDE function, which allows the bike to be connected to a smart phone, while the Track Pack features launch control, freely switchable engine maps, ‘motor slip regulation’ and the ability to switch off the anti-wheelie mode that was previously felt to be overly restrictive.