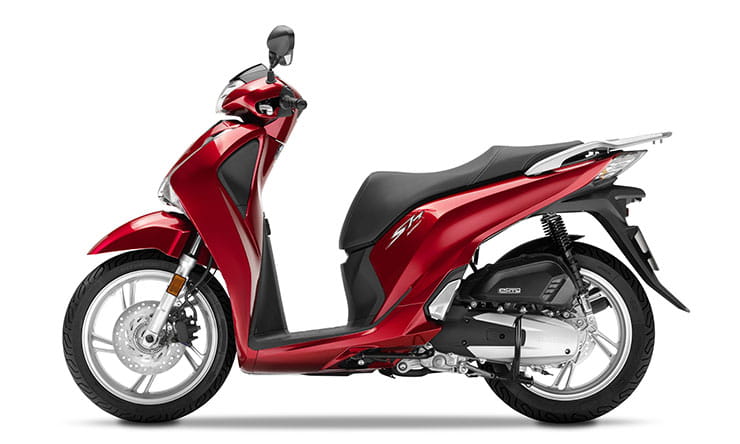 Honda’s enduring SH125i scooter has been given an update for 2017 with revised styling, improved specification and a cleaner engine tune to help it pass the latest Euro4 emissions regulations.

The big-wheeled SH125i is one of Europe’s biggest selling scooters with over 14,000 sold on the continent so far this year and over a million of the ‘SH’ series sold since their introduction in 1984.

The Italian built scoot has been given a mild restyle but the key improvements for 2017 come in the shape of improved practicality with a new keyless ignition system and a 12v charging socket located in a larger glove box.

The two-valve, single cylinder engine is shared with the best-selling PCX125 and has been remapped to give a peak power of 12bhp at 8500rpm. The quiet little motor also features car-style stop/start technology, stopping the engine while idle to save fuel. Honda claim and impressive 134mpg from the SH125i under the standardised World Motorcycle Test Cycle programme. With space under the seat for a full place crash helmet, as well as plenty of hooks for shopping bags, the Honda remains one of the most practical and cheap to run 125cc scooters on the market.

Also new for 2017 is the adoption of Michelin City Grip tyres on the 16” wheels but otherwise it’s a more or less a case of ‘as you were’ which is no bad thing when you are dealing with a vehicle as accomplished as the SH125i.

Three colours are available in the UK: Pearl Nightstar Black, Pearl Cool White and Lucent Silver Metallic. No availability dates or prices are available yet, but expect them to be in line with the £3199 of the current model.