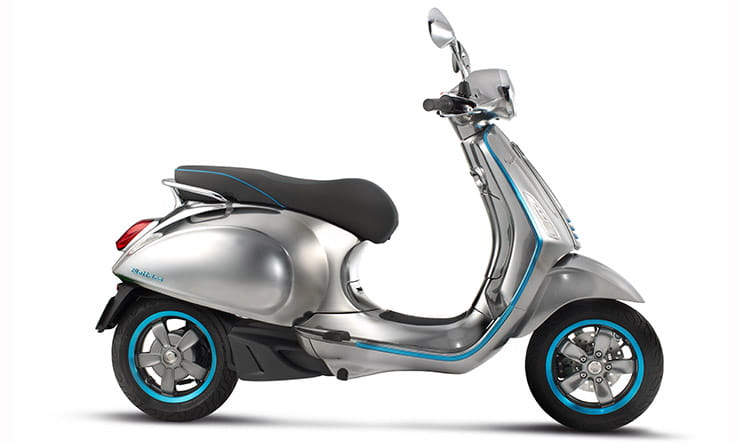 That most traditional of powered two wheelers, the iconic Vespa scooter, is set to become one of the most modern after makers Piaggio confirmed that an electric version of the classic design will go into production ‘in the second half of 2017’.

Piaggio are displaying a funky looking prototype of the Vespa Elettrica at this week’s EICMA show in Milan, retaining the classic steel body that has been the tradition for 70 years but with a high end brushed finish and stylish anodised blue trim.

No technical details have been announced by Piaggio, although they did state that: “The Vespa Elettrica will, first and foremost, be a true Vespa, bringing the very latest in electric technology to a vehicle that will retain all the features that have been vital to its success. The style, agility, ease of use and riding pleasure will be the same as the Vespa we have always known, with the addition of technological and innovative connectivity solutions. A perfect mix of excitement, technology and environmental friendliness that only Vespa can create. Like it has always done in its first seventy years of history.”

Over 18,000,000 Vespas have been sold since its introduction in 1946. The first models were powered by a 98cc two-stroke engine, whose sound gave the model its name (Vespa translating to Wasp). Later bikes came in a range of engine capacities, with the latest range powered by clean running, Euro4 friendly four-strokes. The announcement that an electric version is to be sold opens up a new chapter in the legendary model’s history and makes Piaggio the first mainstream manufacturer to bring a small electric scooter to market.