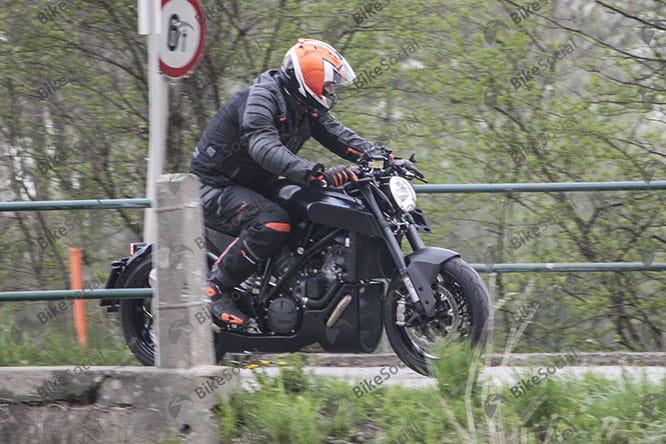 Shots have emerged of the latest prototype to emerge from the KTM factory in Mattighofen.

A power cruiser in the vein of the Ducati Diavel, with touches of pure street fighter, sources close to the factory suggest the new model will be badged as a Husqvarna, despite sharing major components such as the frame, swingarm, wheels and V-twin engine with KTM’s Super Duke R. With its low handlebars and compact solo seat unit, we expect this is a bike built for speed rather than comfort, but touches like the swingarm mounted number plate hanger and exposed rear end apes that of the Diavel.

Indications are the new bike will be called the Husqvarna 1301, a reference to the 1301cc engine capacity and an indication that KTM will be introducing a bigger version of its lusty V-twin in order to meet the pending EURO4 emissions regulations. 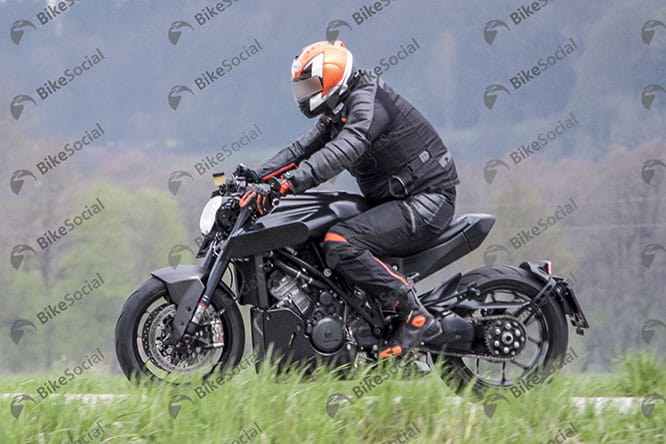 The Husqvarna brand was bought by Pierer Industrie AG, which is owned by KTM CEO Stefan Pierer in 2013, from BMW for a reported €93m.

The company relocated to the Austrian town of Mattighofen, home of KTM’s headquarters, so it would be no surprise to see the two brands share their major components. Earlier this year, KTM told Bike Social that they had big plans to expand their range in the coming years and would be moving into new sectors. Earlier in the year, Husqvarna announced a pair of single cylinder scrambler prototypes based on the KTM Duke 390, called the Vitpilen 401 and Svartpilen 401, which it confirmed would enter production in 2017. Those bikes have also been spied testing recently.

Pierer has been very bullish in his plans for the once Swedish brand, suggesting that it will become Europe’s third biggest manufacturer of motorcycles, behind BMW and KTM, but ahead of Ducati and Triumph, both of which manufacture in excess of 50,000 bikes a year.