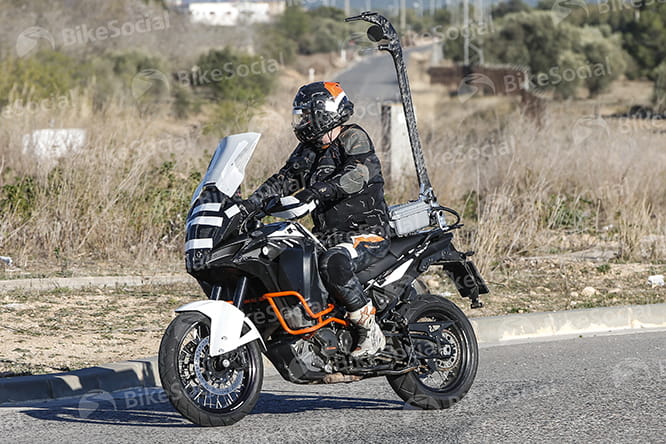 KTM’s 1290 Super Adventure is less than two years old but already the firm is hard at work preparing a redesigned and facelifted version to go on sale in 2017.

The lashings of duct tape and white, pre-production parts – probably 3d-printed – leave no doubt as to this bike’s prototype status, but any lingering doubt is eliminated by some of the most extensive test equipment we’ve ever seen on a development bike.

That Heath-Robinson-esque pylon bolted to the back is the instant talking point. What is it? Why is it there? What are they hoping to achieve?

From the look of it, the pylon’s purpose is to measure wind speed and background noise. There’s clearly a pitot tube – the sort used to measure air speed on aeroplanes – at the top, with a microphone below. The lower probe might be a thermocouple to measure air temperature.

Why does it need all that? If you look below, the rider’s jacket and helmet are covered in small, taped-on streamers. These show the patterns of airflow over him, and his helmet also appears to be wired up, probably for a microphone measuring wind noise. It’s all in an effort to validate the new nose fairing and screen design that’s being tested.

You can see that the screen, a prototype part that’s sure to be clear by the time the bike reaches production, is a new shape and features unusual perforations on each side. It’s also adjustable for height. Its shape and the effects of altering its position are likely to be the focus of the test you see here. The rear pylon mounts its measuring equipment high enough to be out of the influence of the screen, so measurements of wind speed and noise at that level can be compared with measurements from the rider’s helmet to see the effect that the screen is having.

Apart from the new screen, there’s also a redesigned front fairing and side panels. The tiny projector headlights are likely to be temporary parts while the actual light unit is still under development. When finished, it’s probably going to be fairly similar in shape to that of the current model.

The side panels feature repositioned air intakes for the radiator and the auxiliary lights are also moved upwards. As well as putting them in a position where they’re less likely to be susceptible to damage, the move is likely to improve the spread of light they provide.

Mechanically the bike doesn’t display significant changes. The suspension – WP’s semi-active kit – looks much like the current stuff, and the engine and chassis are visually unaltered. Given that it’s got more power than any of its rivals, with 160bhp, and that the Super Adventure’s tech kit is already at the cutting edge, it’s likely that any alterations will simply to be to ensure that the bike meets the latest European regulations, including Euro4 emissions limits, which come into force for all new motorcycles at the start of 2017.

There’s clearly still plenty of work to be done on the new fairing, with the final screen and headlight still to make an appearance, but we’d expect the bike to be ready to be shown in Autumn and to go into production around the end of the year.