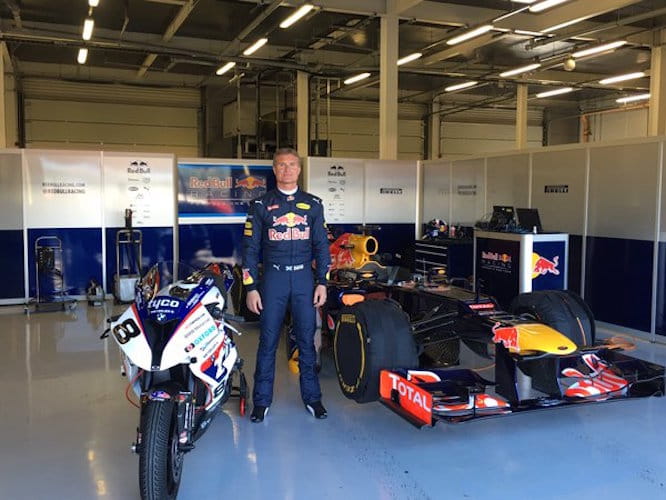 The road racing star, who recently announced he would not be at this year’s Isle of Man TT, put his Tyco BMW S1000RR against Coulthard’s V8 Red Bull Racing car at Silverstone, in what C4 are calling a ‘test of speed never seen before.

The challenges include a drag race, a brake test, a slalom and a full circuit race as well as mental and physical tests in the garage.

The one-off programme, produced by North One Television will be broadcast on Thursday 17th March at 9pm ahead of the opening round of the F1 season.

A statement from Martin's team read:

"Motorbike racer and lorry mechanic, Guy Martin is fascinated by Formula 1 - the cars, the engineering and the racing. In this special programme, broadcast ahead of the launch of Formula 1 on Channel 4, Guy will go head to head with racing legend David Coulthard, pitting bike against car in a test of speed the like of which Silverstone has never seen before.

With David in a V8 Red Bull car (with an 11 man pit crew) and Guy on his Tyco BMW Superbike (which came with just one man - Guy's most trusted race mechanic), the pair explore each other's worlds the way they both know best; by racing in a series of head-to-head challenges including a drag race, a brake test, a slalom and a full on circuit race.

The adrenalin fuelled excitement of their on track competition is matched only by the entertainment of what they get up to in the pit garages as they compete in physical and mental challenges, testing their fitness and reaction times and exploring the science behind their incredible racing machines."