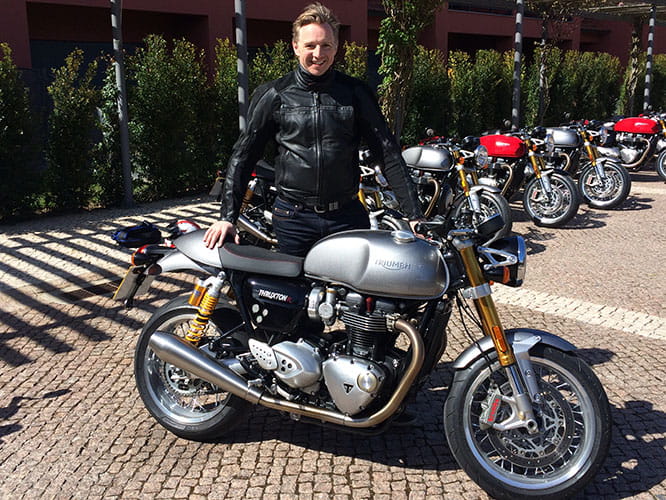 Back in the 1960s and '70s a generation of motorcyclists were inspired by what they were seeing at Thruxton, the super-quick racetrack in Hampshire.

The Thruxton 500 mile endurance race was one of the top events in the country, and Triumph became synonymous with the race. The company hand built a limited number of performance versions of the T120 Bonneville, known as the T120 Thruxton, and a legend was born after the company blazed to the top three places in 1969.

Triumph revived the Thruxton name in 2004, with a cafe racer styled version of the new generation Bonneville which spent 12 years in the range.

Fast forward to today and the men from Hinckley have unveiled not one new Bonneville, but five. And here we are just outside Lisbon today riding the beautiful new Triumph Thruxton R, the higher spec version of the standard bike.

The new Thruxton R is the epitome of a modern classic cafe racer, gelling iconic and authentic styling with a truck-load of modern engineering. The bike is powered by a brand new 1200cc 'High Power' liquid-cooled, eight valve, parallel twin engine delivering 95.7bhp, and comes equipped with such rider-focused goodies as ride-by-wire throttle, three engine maps, a 62% increase in torque (over the previous model), top spec suspension, brakes and tyres, traction control and so on. Prices start at £10,400 for the base model, through to £11,700 for the higher-spec R version tested today.

Bike Social's Michael Mann was the lucky fella to be invited to ride the bike before it goes on sale, and he has phoned in these first opinions ahead of our world first review.

"From the pictures you can immediately see that it's a stylish, sexy bike and I'm please to report that the Thruxton R is as good to ride as it is to look at.

"The high power version of the new 1200cc engine is vibrant. It makes 96bhp, but it's the sack full of torque that gives it a lively and sprightly nature.

"It is quick to turn, with the Ohlins and Pirelli Diablo Rosso Corsas combining to accentuate the capability in the corners. The roar from the stainless steel exhausts is a real racket and is such a joy to listen to. Keep the bike in the higher revs, work the slick gearbox and you'll be rewarded with a cracking ride.

"The seating position is really good, although the seat is perhaps a little hard for me. We're off to ride a bit more though, so check back for the full review later." 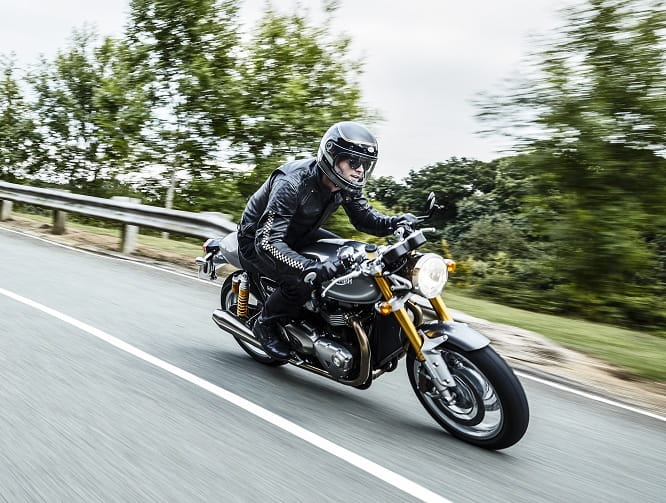 Do you have your eye on the Thruxton R?