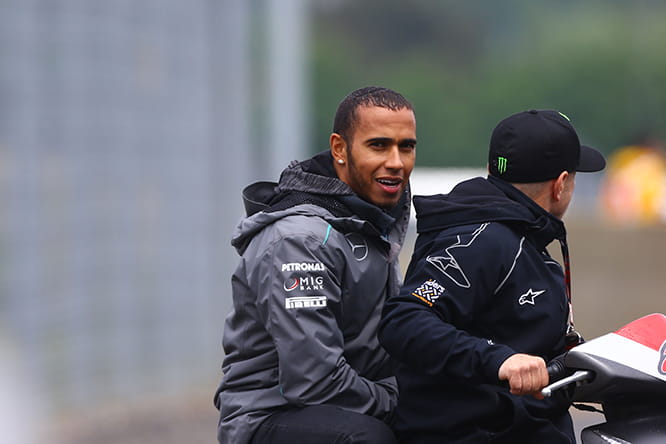 Three times Formula One World Champion, Lewis Hamilton, has agreed publicly with what we knew already, that MotoGP is more exciting than F1 because its races provide closer racing.

"MotoGP is just so cool, much more exciting to watch, I would say, just because it's closer racing," he said.

As the build-up to the 2016 F1 season continues at the pre-season tests in Barcelona, Hamilton was asked "if F1 is broken, lacking direction, or in rude health?”

The Mercedes AMG Petronas driver responded initially by not wishing to elaborate but then said, "I would probably say the first two you suggested."

He then expressed his passion for MotoGP by talking about attending more races and wishing to ride.

"I really need to try a MotoGP bike. I'm dying to at least get on the back of one.

"That would be so cool. I just won't tell my team that I'm doing it! I definitely want to make it to more races this year - I've only been to one in a season, and I want to get to some more."

Last August, Hamilton even recalled early childhood memories when wishing for a motorbike instead of the first go-kart his father bought him. It lead to 7-times MotoGP/500cc World Champion, Valentino Rossi, offering Lewis Hamilton the chance to test his Yamaha M1, “maybe with big insurance” said the Italian.

Can Lewis Hamilton replicate John Surtees' success on two and four wheels?  or !