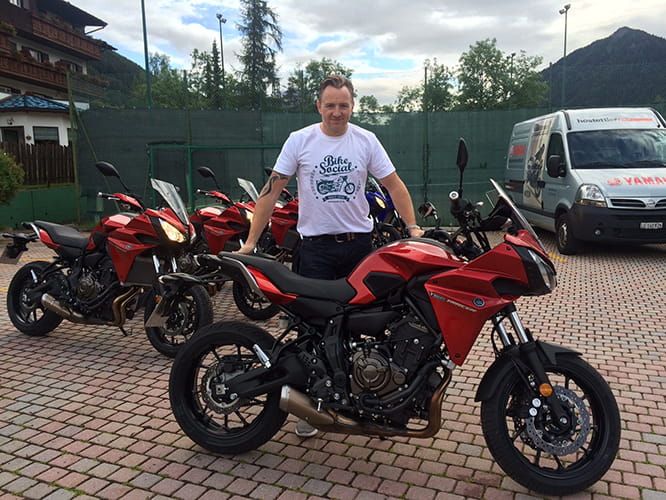 Having enjoyed epic levels of sales success with its MT-range in recent years, namely the naked MT-07 and MT-09 and more recently the sports-touring MT-09 Tracer, entry level MT-03 and ever-so-slightly crazy MT-10, along comes the 10th bike to bear the MT name…except that it doesn’t.

The new sports-tourer that is powered by the same 689cc, twin-cylinder engine as the MT-07, was expected to be named the ‘MT-07 Tracer’. Insetad, Yamaha called it the Tracer 700, and also renamed the MT-09 Tracer into the Tracer 900.

Anyway, having been spotted in secret testing in July 2015, it took Yamaha until April of this year to fine tune the developments and officially announce its versatile mid-capacity sports-tourer set to rival the likes of Suzuki’s V-Strom, Kawasaki’s Versys 650 and the new Honda NC750X.

At first glance of the comparative specifications, the Yamaha makes 5bhp more power (73.8bhp vs 68bhp of the Kawasaki and Suzuki), weighs at least 18kg less (196kg vs 214kg of the Suzuki) and costs a bargain £6299, £350 cheaper than its closest rival. So given the MT-07s dynamic and sporty ability on the roads, Yamaha could continue their sales chart-dominating resurgence with the taller, more comfortable Tracer 700.

The Tracer gets a 50mm longer swinging arm than that on the MT-07 to increase stability at higher cruising speeds especially when riding two-up and with luggage. Both front and rear suspension systems get revised settings for ‘smooth and responsive’ characteristics in a variety of conditions.

A larger 17 litre fuel tank, manually adjustable screen and wind defecting knuckle guards add to the Tracer’s ability to eat up the miles on tour.

The bike is set to be available in dealerships from next month with optional extras including 20-litre soft side cases, as well as a 39-litre top case, and there is also a higher windscreen for increased weather protection. 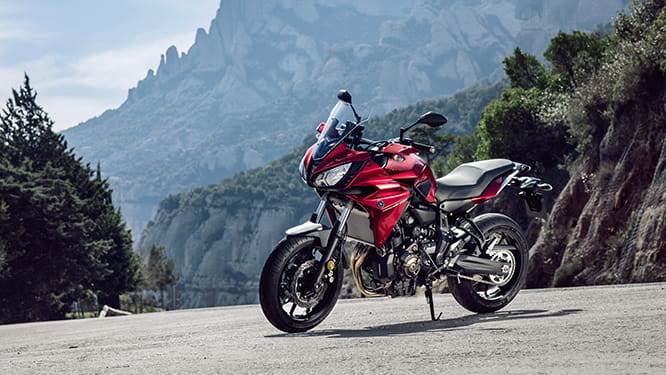 The press launch is taking place right now in Northern Italy where Bike Social’s Michael Mann has been riding the new Tracer 700 this morning. Ahead of his full review, these are his first impressions:

"The new middle-weight sports tourer is a hoot to ride. Easy to just hop-on and go. No modes to worry about, no traction control levels or anti-wheelie settings. Just standard, simple, uncomplicated operations."

Mann added: "The twin cylinder 689cc 4-stroke is a fine engine with plenty of torque as you'd expect as it came straight as the MT-07. Some nice little design features such as the indicator covers (looking like MotoGP winglets!) and twin headlamps add to its neat and pleasing-on-the-eye styling.

The riding position is spot-on and the seat both comfortable and versatile. Shuffle forwards and it feels sportier, scoot to the back and the ridge separating the pillion section acts as neat buffer for a more touring position."

He continued: "At £6299 and less than 200kg the Yamaha represents terrific value but the price tag of course means brakes and suspension aren't too high spec but for the target customer of a less experience rider they're more than suitable. One worthy point to make at this stage is how good the standard-fit Michelin Pilot Road 4 are. The longer shock absorber and lengthier swing arm help combat the slight sogginess suffered by the MT-07. The Tracer version is set to be a huge seller. As big as the MT-07? Only time will tell." 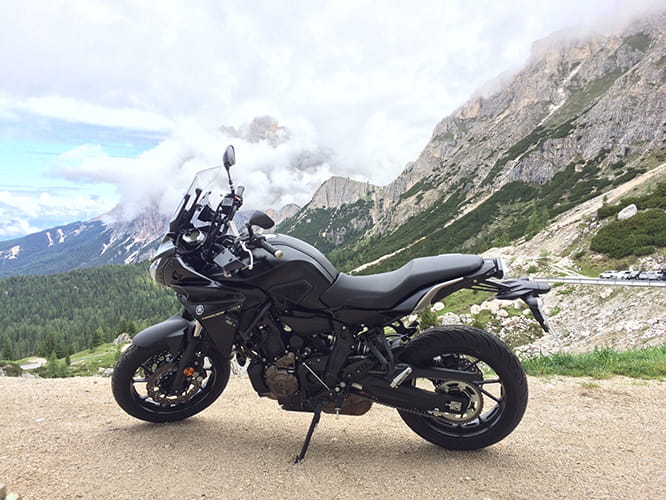