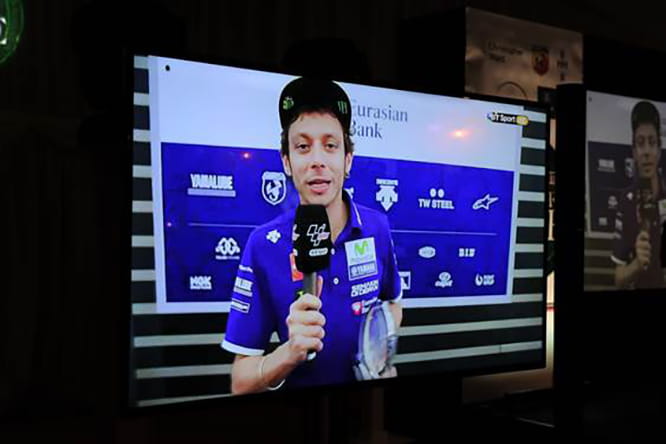 Valentino Rossi was one of five new motorsport personalities who were inducted into the Motor Sport Hall of Fame, and the only one to represent motorcycle racing.

The ceremony took place on Tuesday 31 May 2016 at the Royal Automobile Club’s Woodcote Park country estate.

This year was the first time the inductees were decided by the public, the other nominees to represent motorcycling in the Hall of Fame were Joey Dunlop or Mike Hailwood, a tough choice that spans several decades of top drawer motorcycle racing.

There could only be one winner, and  the public chose the charismatic Italian. Rossi, speaking from the Yamaha motorhome at the Spanish Grand Prix began: “Hi to everybody and I am very happy and very proud to enter into the Hall of Fame. It is a great shame that I cannot come over there with you, but I wanted to say thank you, thanks a lot. I am so happy – I will put the prize in my bedroom so we can sleep together!”

Talking of the founding member on the trophy he said, “Being with these important names of motor sport is fantastic. Thank you to everybody and I hope to see you next time.”

John Surtees CBE made the formal announcement, and talked of his admiration for Rossi.