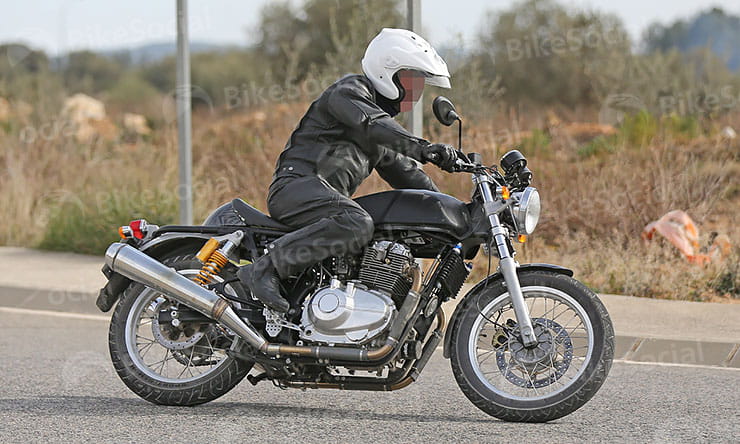 Bike Social’s snappers have spotted a Continental GT test mule featuring what we believe to be a 750cc oil-cooled motor that shares many components with the recently introduced Himalayan single.

The Indian manufacturer is massive in its homeland and has big plans to expand its presence in the global motorcycle market. Royal Enfield, which made its first motorcycle in Redditch in 1901 and which started manufacturing in India in 1955, recently opened a new technology centre in Leicestershire, taking on a number of key former Triumph employees to develop a range of more modern platforms.

Our understanding is that the model spotted on test is likely to be aimed primarily at Enfield’s home market, where foreign brands such as Ducati, Harley-Davidson and Triumph are muscling in on its territory with bigger and more modern machines.

Simplicity is the key for many Indian riders, which is what you get with the new Enfield 750. The parallel twin unit features a small oil cooler hanging from the frame tubes and is fed by twin carburettors, meaning that it is unlikely to get through the upcoming Euro 4 emissions regulations without sacrificing serious amounts of power, although we would still expect that a fuel-injected, Euro 4 compliant, version is likely to appear in 2018 to cater for the European markets. Currently the Continental GT is powered by an ancient 535cc fuel-injected single cylinder unit putting out just 29bhp, while we would expect the new model to produce in the region of 40bhp. 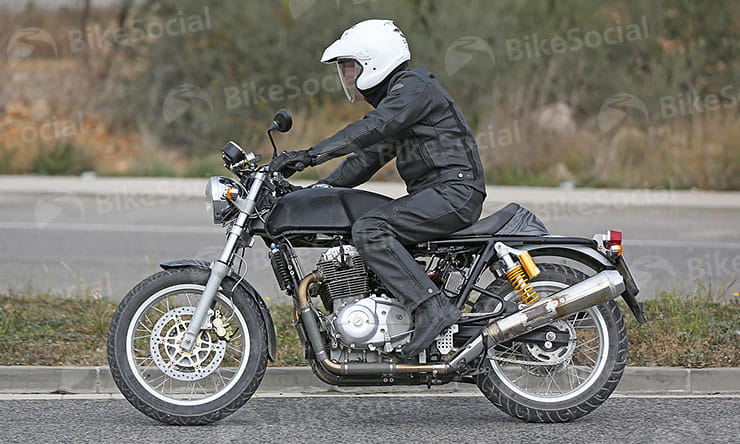 The chassis of the test mule appears to be that of the current Continental GT, albeit lightly modified to accept the new engine, and features components from some leading European manufacturers, such as piggyback rear shocks from Ohlins, Brembo brake calipers and Pirelli Sport Demon tyres.

Siddhartha Lal, Managing Director and CEO of Eicher Motors Limited responded to our request for a statement by telling us, “Details for future products cannot be confirmed at this stage; however, we can confirm that Royal Enfield does have a strong pipeline of new products, details of which will be announced in due course. It is an exciting time for the brand and these developments form part of our long term global product strategy.”

Lal, has previously told Bike Social that the company is working on two new engine platforms and will have a range of models “between 250 and 750cc”. While the new oil-cooled twin is unlikely to change the perception of Royal Enfield as a niche brand in the UK, it should mark the start of an exciting period in the company’s history as it develops and brings to market a number of new and more modern products.

We understand that the parallel twin will be unveiled at one of the big Indian bike shows later this year, with UK versions available in 2018.