Triumph boss comes out of shadows to accept prestigious award 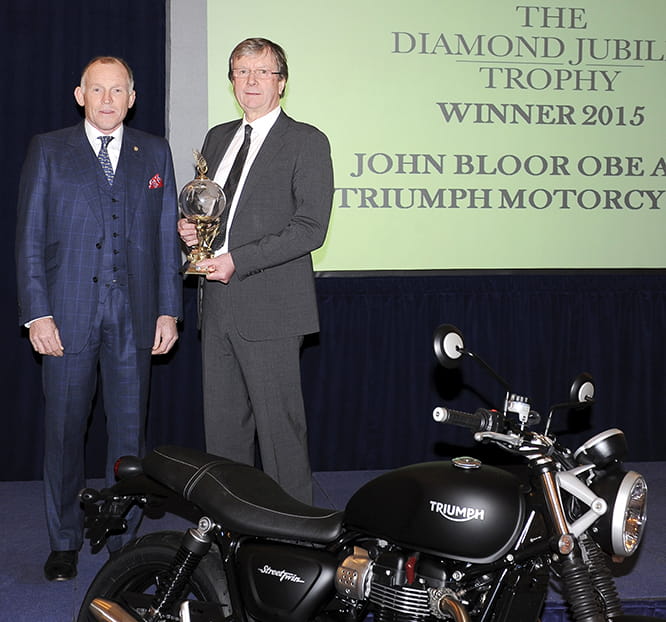 Mysterious and notoriously publicity-shy Triumph boss John Bloor stepped out in front of the cameras this week to collect an Royal Automobile Club Award for Triumph’s outstanding contribution to the motorcycle industry.

The prestigious Diamond Jubilee Trophy has only been given out four times previously in its 58-year history.

Bloor accepted the honour on behalf of all the staff at Triumph Motorcycles at a swanky reception at the RAC club in London’s Pall Mall today. Though the man behind Triumph’s rejuvenation, John Bloor rarely appears at public gatherings and for years has refused to do interviews with motorcycle press, despite the firm’s obvious success.

Bike Social were there to watch the proceedings, though Bloor plain blank refused a proper interview with us when reporter Oli Rushby politely asked. But Bloor did manage to say this to the assembled journalists and VIP guests.

He said: “I am delighted to accept this trophy on behalf of all the staff at Triumph Motorcycles. From the design department in Hinckley, to our global manufacturing facilities and worldwide sales and distribution offices, everyone at Triumph works with passion and pride to excite and engage with our customers. The success of the brand is, without doubt, down to the skill and commitment of our team.”

John Bloor bought the Triumph name in 1983 and turned it into a true world power house of motorcycling from its Hinckley, Leicestershire base.

While Bloor is responsible for breathing life back into one of Britain’s most iconic motorcycling brands, he firmly believes that its success is down to his employees, who are the heartbeat of the business.

In 2015, Triumph Motorcycles reported an annual turnover of £341.3m. Though interestingly, that only generated a profit of £2.3m because of increased investment last year.

Triumph claims they have always seen R&D as a strategic priority and invested more than £25m (approximately 7.5% of turnover) per annum in 2014 and 2015. During the previous financial year, the company, which employs 2,300 people globally, sold 53,812 motorcycles. Throughout the year, Triumph continued significant investment in new model development and in its manufacturing and distribution networks in India, Thailand and Brazil.

Former winners of the RACE Diamond Trophy award, created to celebrate the Diamond Jubilee of the RAC Club in 1957, include Sir Christopher Cockerell, inventor of the hovercraft, The British Aircraft Corporation and Aerospatiale (France), for the development of Concorde. Not forgetting Sir Richard Noble, for setting a new land speed record of 633.486mph.