Top European events to ride to in 2016

How far will you ride to a bike event in 2016? We've picked out ten of the best around Europe to whet your appetite. 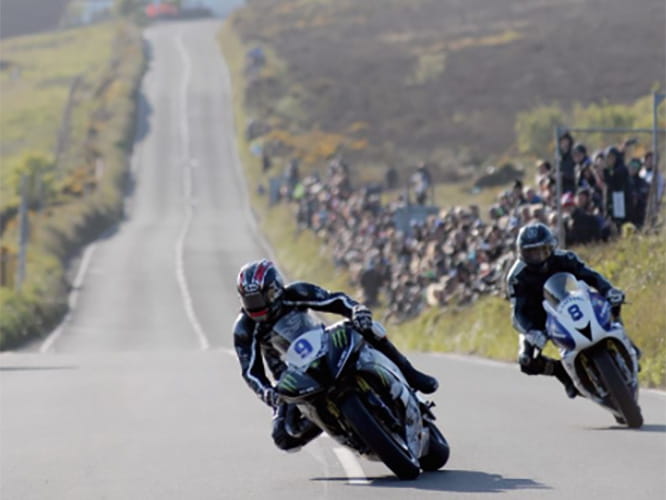 The big one. If you’ve never been to the TT make 2016 your year. It’s the one British motorcycling event you simply MUST do before cruising up to the pearly gates. A motorcycling event like no other, the TT takes over the timewarp Isle of Man for two weeks with its mix of incomparable, heart-in-mouth road racing (‘race’ week begins June 6th topped off with the six-lap Senior on the 10th), biker rallies and shows, bands, custom shows, the Ramsay Sprint and 24-hour motorcycle partying – and for it all you simply MUST have a bike to get around on. Practice week begins May 28th, legendary ‘Mad Sunday’, is June 5th, accommodation is still available (but can be expensive, camping is a popular alternative) as are ferry crossings via www.steam-packet.com and if you really can’t make it consider the shorter, cheaper, Classic TT from 27-29 August instead. 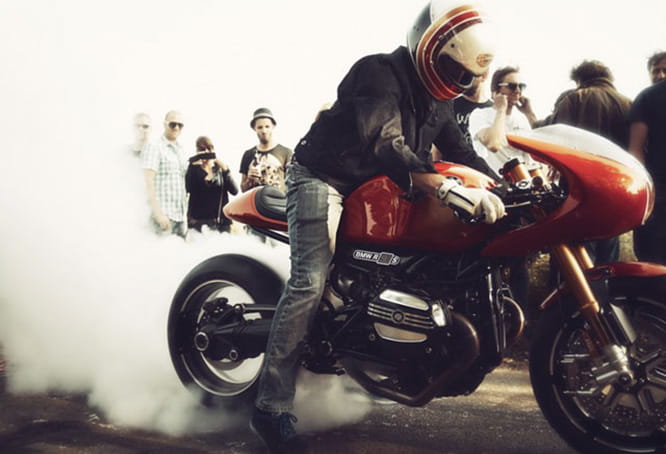 Although only going since 2012, W&W has quickly established itself as THE ‘hipster-style’ festival for its mix of contemporary custom bike culture and the surfing scene, er, dude. Its based at the French capital of surf, trendy Biarritz in southwest France right on the Spanish border (meaning it’s also a great ride down from Blighty). Already seen as one of the ‘coolest’ motorcycling events in Europe with custom shows, independent custom stalls, racing, music, art and people-watching on an industrial scale, slick organization and marketing has meant it’s also already a serious commercial proposition, with backing from BMW, Yamaha, Triumph, Ducati and more. 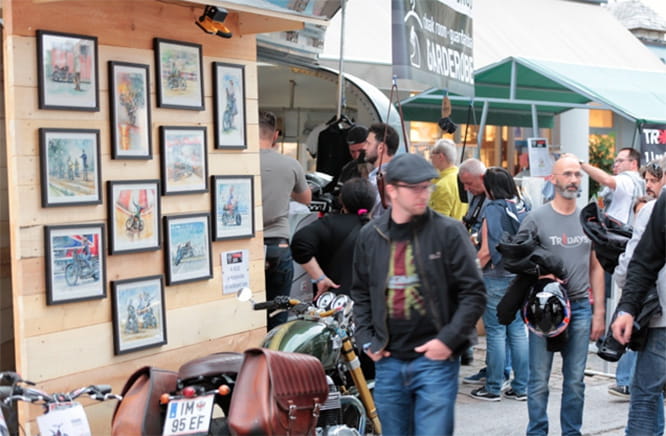 A slightly odd one, this. Tridays is a Triumph themed (and now officially backed by the Hinckley firm, too) motorcycling festival that’s now grown into a four-day (originally it was just three) long-weekend of bikes, bands, custom shows, stunt shows, ride-outs, parties and more in, of all places, Austria. Yes, that’s right, this Brit-bike biking bonanza takes place, not in Blighty, but in the foothills of the Alps, just outside Saltzburg. (Hmmmm. At least it makes for a picturesque backdrop and an entertaining ride out there…) Specifically its located in the small town of Neukirchen which is specially renamed ‘Newchurch’ for the event (hence the name of the limited edition Bonneville of the same name last year). 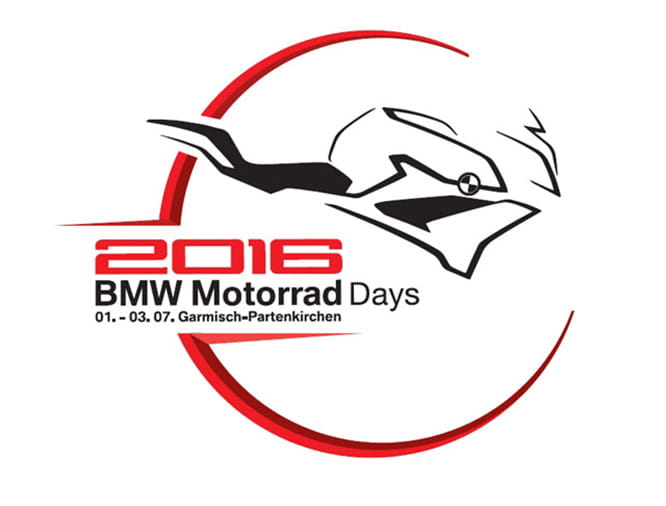 Long-established as one of the best of all the manufacturer-backed/themed motorcycle festivals, BMW Motorrad Days is an annual event that traditionally takes place the first weekend of July in the ski resort town of Garmisch-Partenkirchen in the very south of Germany right on the Austrian border which now regularly attracts tens of thousands of visitors. There’s many of the usual attractions – stunt shows, ride-outs, trade stalls, manufacturer test rides, bands and more – but, in addition (this being Bavaria) there’s a particular German beer festival atmosphere a’la Munich’s famous Oktoberfest, with all the lederhosen, buxom barmaids and steins of lager images that it brings. It’s a great two-day ride down, too. 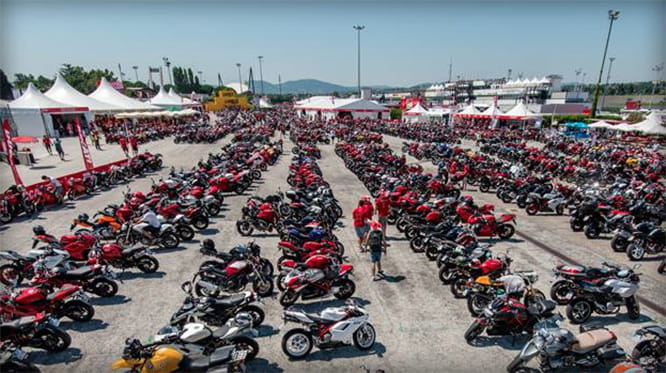 2016 sees the ninth WDW (it variously has stood for World Ducati Week and World Ducati Weekend and isn’t held every year) since the first in 1998 and should be the biggest and best yet. 2016 is Ducati’s 60th anniversary, the Bologna-based firm has more new models to see and sample than ever and the firm’s ‘prodigal son’, Casey Stoner, has this year returned to the Italian marque and will be on hand, along with all Ducati’s leading riders, to entertain the crowds, sign autographs and so on. Unlike Tridays and Garmisch (with which, this year, it clashes dates), WDW is track-based at Misano, near the seaside resort of Rimini in Italy, which gives an added dimension of track action. Otherwise the elements are familiar, albeit Ducati-themed: custom bikes and shows, ride-outs, test rides, bands, demo and more – even a traditional BBQ served by Ducati staff including CEO Claudio Domenicali himself! 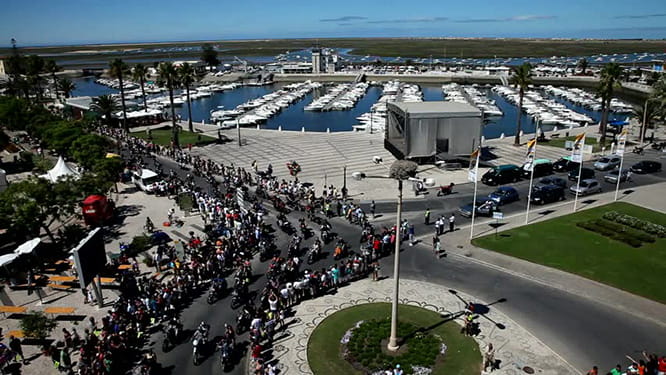 One of Europe’s biggest – and hottest – motorcycle rallies, Faro is traditionally held annually on the third weekend of July (although as we write 2016’s dates have yet to be officially confirmed). Effectively a ‘European Daytona Bike Week’ it’s a custom-themed festival held at one of Europe’s hottest locations – Faro is the capital of the Algarve holiday area of Portugal on the southernmost tip of the country not far from Gibraltar. As such it’s a fair old ride, although most Brits take the long ferry to Santander or Bilbao in northern Spain before riding south across Spain. 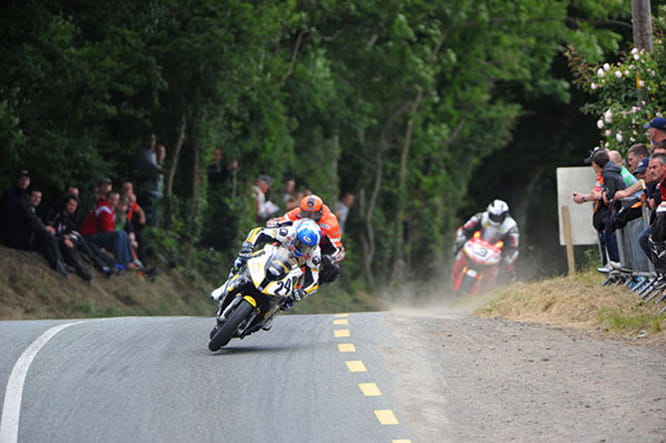 The famous ‘Skerries’ are the oldest and most prestigious of all the iconic pure road races held in Ireland. Located on the roads around the picturesque seaside village of Skerries north of Dublin the event attracts not just the leading road racers but also crowds of thousands who bring a festival atmosphere to the whole area. Pubs put on live bands, restaurants and cafes offer breakfast and are open all day and the action is like the TT on steroids – and all just a ferry ride across the Irish Sea. 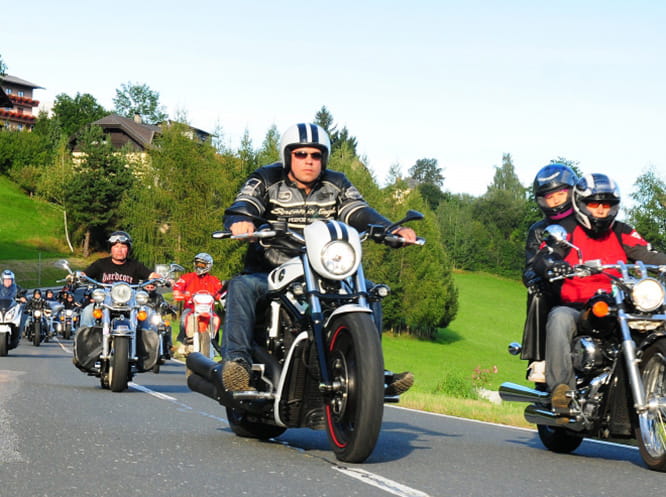 European version of Daytona Bike Week is one of the Continent’s biggest motorcycling events and the biggest annual gathering of Harley-riders and custom fans. Based annually at the lakeside resort of Faaker See in southern Austria it’s now been running for 19 years and is expected to attract around 100,000 Hog fans (the free event is officially backed by Harley-Davidson), who come to enjoy six days of bands, ride-outs (and the landscape is spectacular), custom shows and more. 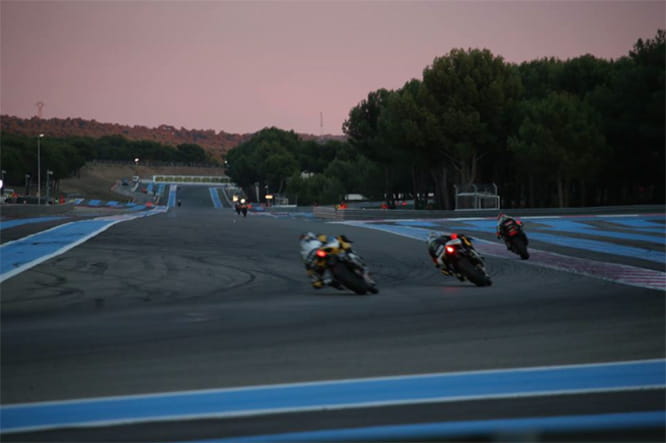 One of THE classic motorcycle events returned in 2015 when the historic, season-closing, Bol d’Or 24-hour endurance race moved back, after nearly 20 years, to its historic home at Circuit Paul Ricard just inland from Toulon on the French Riviera. In the ‘80s and ‘90s the Bol was one of the highlights of the calendar, combining a great two-day ride south, inimitable track with daunting Mistral straight; fabulous festival atmosphere with bands, beer, BBQs, fairgrounds and more and all just a fab 15-minute ride from the beach. Oh, and there’s racing, too. France itself, having toughened up severely on speeders, may not be the motorcycle nirvana it once was, but there’s still no better way to end summer. 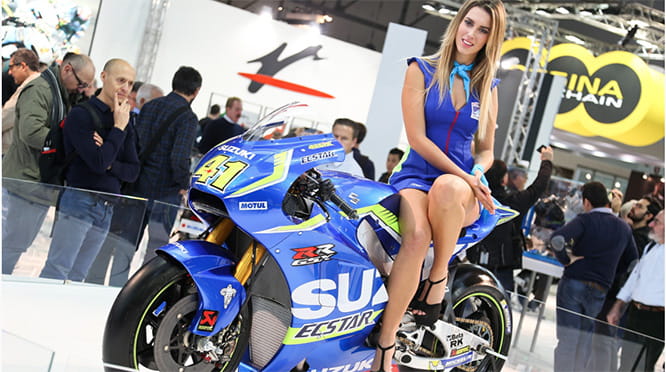 OK, it’s not likely to be your warmest ride-out of the year, but the huge EICMA Show in Milan is definitely one of the biggest events you’ll attend all year. Now firmly established as THE motorcycling show, all 2017’s new models will be on show in an event that makes the NEC look like a bring and buy sale. Held at the enormous Milan Fiero it’s held over a full week in around eight halls including vast stands from not just all the leading manufacturers but also accessories and clothing firms, magazines, customizers and more. It’s a decent ride down, too, over the Alps – although you’d be advised to book your hotel early as demand is high.