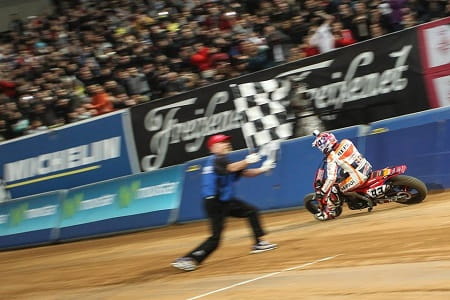 Marc Marquez ended 2014 in style last night as he won the second edition of Barcelona’s Superprestigio dirt track event. In January the MotoGP World Champion missed out on victory after being punted off track by then AMA Grand National flat track champ Brad Baker.

Everything pointed towards a re-match between the Spaniard and American this time around until a fall for Baker in qualifying saw him ruled out with a dislocated collarbone.

The pair were caught up when Thomas Chareyre pushed them wide into the first turn giving the lead to CEV Superbike Champion Kenny Noyes and Gerard Bailo. Bailo proved easy for the duo to pass but Noyes put up a fight. As often seen from Marquez on the MotoGP race track, he’d gained enough of a cushion at the front to take victory from Mees at the end of the twelve lap battle.

Earlier in the evening, Marquez won the ‘Superprestigio’ (Grand Prix riders) class from Bradley Smith, while Mees took victory in the open category. Troy Bayliss finished tenth overall. Road racing ace Guy Martin didn’t make it through into the finals after a seventh place in the last chance qualifiers. Bike Social-backed Scott Redding withdrew from the event in the early stages after a chest injury sustained in qualifying practice.