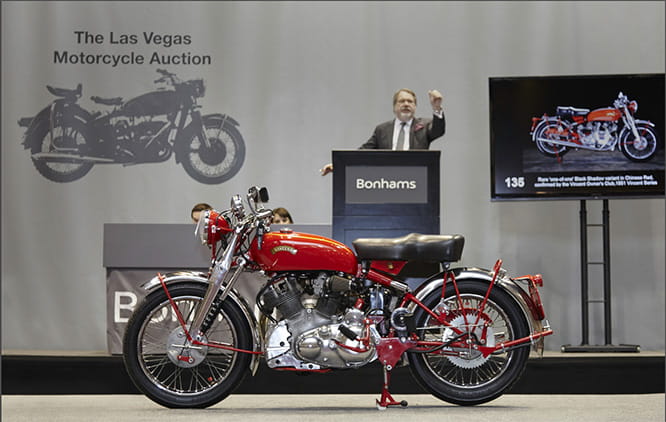 In Las Vegas last week, a one-of-one built 1951 Vincent Series C “White Shadow” in Chinese Red sold to a British buyer for almost $434,000, which by todays exchange rate, is approximately £300,000, making it a new world record for a Shadow.

This particular example, although fully restored, became the subject of a bidding war between an Australian-base and UK-based telephone bidders with the Brit coming out on top.

Any Series C Black Shadow is a rare and desirable beast, as only 1507 were produced by the Stevenage factory in 1949-52. Rarer still are the 'White Shadow' variants, identical except these were built with polished bare metal cases instead of the usual black stove-enameled crankcases. Records show that just 15 White Shadows were made and this bike takes that rarity even further, as it left the assembly line with parts including fuel tank and fork tubes painted in the factory's Chinese Red, a special-order shade usually reserved for Rapide touring models. Reportedly no other Shadow was so-equipped, as verified in several Vincent histories and in correspondence from the Vincent Owner's Club, making this 'Red' White Shadow a true one-of-one.

Nick Smith, Bonhams US Head of Motorcycles, said: “It’s obvious from the results that the rare, unusual and original machines stand out and that people are willing to invest $100,000+ on good quality motorcycles.”