Britain’s Sam Sunderland took victory in the second stage of the 2014 Dakar Rally yesterday, marking Honda’s second win in as many stages. 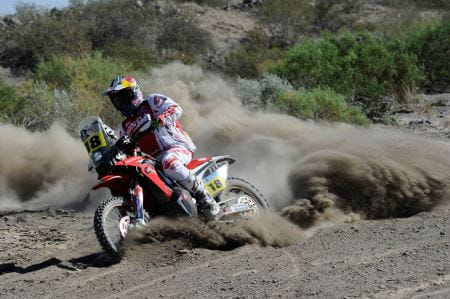 In total Monday’s stage was shorter than the 809km first stage, but the physical demands of the diverse terrain including the challenging dunes of Nihuil make it all the more physically demanding. Organisers had said the 359km timed special stage would be the fastest of the event and Sunderland didn’t falter, pushing hard in the second half of the day showing off his skill and handling navigating the dunes.  Sunderland’s debut Dakar victory places him third in the overall standings after a ninth place finish in the first stage.

“I’m really happy. The bike was fantastic, it’s been a great day with a mixture of different terrains, speed and technical zones” commented Sunderland.

“We got to the dunes which I get on really well with. It wasn’t a really long stretch, but it went well. I crossed the river which was deeper than I had expected, which got a few laughs out of the folk. But I’m really pleased for my first Dakar victory and to continue Honda’s winning streak.” 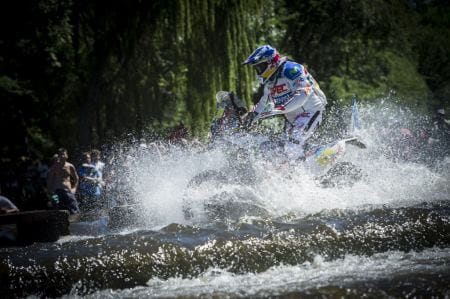 Chaleco Lopez came in some 39 seconds behind winner Sunderland to take second for Red Bull KTM. The Chilean now sits second in the overall standings after a sixth place finish in stage one.

“The first part was very fast and it was very nice to get into the dunes. Today second place is good and the bike was good, very good, in the sand”

First stage winner Joan Barreda finished third, two-minutes behind his HRC team-mate Sunderland after an incident involving a cow.The Spaniard remains on top of the overall standings as the only rider to have finished on the podium in both of the first stages.

“I  knew that it was going to be a day to be on the look-out for animals” explained Barreda.

“When I was about 70 km away from the finish-line, with the big hazards out of the way and the navigation through the dunes completed, I crossed a river with low-visibility and came across a cow on the curve. I tried to avoid it, but it came running out and I ran into it. It wasn’t a great impact, but it broke the higher part of the navigation, and I had to work the roadbook manually.” 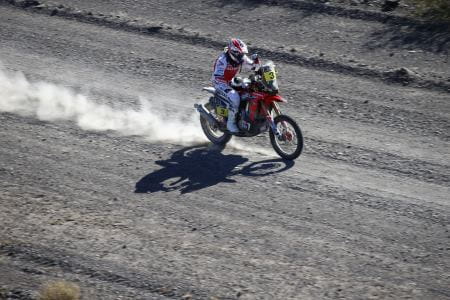 Yesterday’s second and third place finishers, Marc Coma (KTM) and Cyril Depres (Yamaha) finished ninth and tenth respectively. Coma had some difficulty with a stone wedged in his bike, leaving him eight minutes behind the leader by the end of the stage while a small fall saw Depres drop back.

Riders will now embark on the first half of a marathon stage, which sees riders stop overnight in an isolated bivouac in between stages three and four. With no teams allowed, riders will have to make any mechanical tweaks to their bikes themselves.