‘Sheene’ set for the silver screen 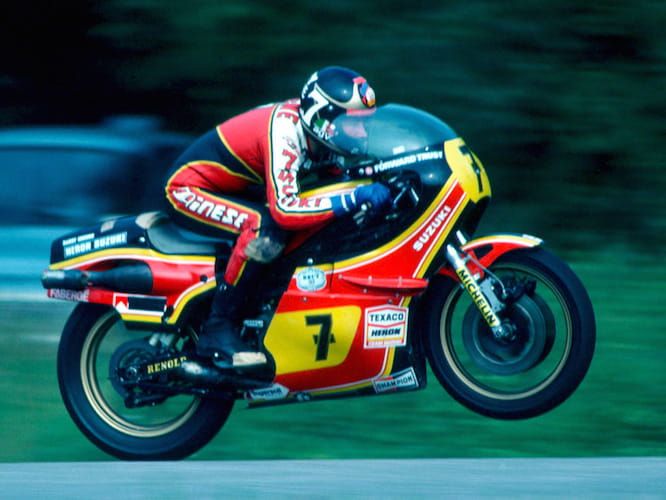 ‘Sheene’ set for the silver screen

Race legend Barry Sheene is set to come to the big screen in an all-new, feature-length biopic from the celebrated writers of Auf Wiedersehen Pet, Porridge and The Likely Lads.

The two-time 500cc world champion – the last Brit to claim the premier class title – is the subject of a movie currently in development in a joint UK/Australian production. The story is based on the book ‘Barry: the Story of Motorcycling Legend Barry Sheene’ by Barry’s teammate and friend Steve Parrish and GP commentator Nick Harris with both signing up to be consultants on the movie. While the script, adapted from the book, is by acclaimed British screenwriting duo Dick Clement and Ian La Frenais, who, with Porridge and more have been responsible not just for some of British TV’s biggest hits but also movies including The Commitments and The Bank Job.

The duo are reported to currently be putting the finishing touches to the script with casting expected in the next few months and filming due to commence later this year. Its likely release in 2017 will mark the 40th anniversary of Sheene’s last 500cc crown. To mark the announcement of the movie, producers, Brit Will Stoppard (son of playwright Tom) and Aussie Rod Morris have released this short teaser trailer on social media.

Londoner Sheene, who tragically lost his life to cancer in 2003 aged just 52, is arguably the most famous and loved motorcycle racer of all time. Twice 500cc world champion (in 1976 and 1977) he is even more celebrated for his achievements and antics off-bike. His good looks, cheeky-chappie personality and marketing nous won him a legion of fans, made him the poster boy of a generation and delivered TV shows, advertising campaigns (most famously for aftershave Brut) and previously unheard of (for a bike racer) wealth and recognition.

Just as famously Sheene also cheated death twice in two near-fatal crashes (at Daytona in 1975 and Silverstone in 1982) before returning to the very top of the sport. Following his retirement in 1984 he emigrated with model wife Stephanie to Australia’s Gold Coast where he became a successful motorsport commentator for Australia’s Channel Nine. The new movie follows similar recent motorsport biopic Rush, which celebrated F1 drivers James Hunt and Niki Lauda, and the documentary Senna, which both proved successful.

Scriptwriters Clement and La Frenais, both now based in Hollywood, told The Standard they were amazed Sheene’s story had not been turned into a movie before.

La Frenais said: “It’s surprising it’s not been done. It’s about sport, but it’s also about living your life to the absolute limit. He’s a fascinating personality to portray. He was a chancer, a flirt but also an incredibly good bloke. He was a rock star.”

Stoppard added: “We are thrilled to have screenplay writers of Ian and Dick’s calibre. From the beginning it was clear they understood who Barry was and what he stood for. We knew they would deliver material that portrays the uncompromising, larger than life character, coupled with the humour and drama that was never very far away from Barry. At the same time they have their finger on the pulse of the 1970s enabling them to make the most and capture this fascinating era as a backdrop to the movie.”

He added: “It’s a rush to be making a movie about Barry Sheene – bringing his story and legacy to the big screen. When he was thrown into the public eye after his Daytona crash, I remember feeling a sense of empathy with this intrepid character and he became a childhood hero. I was fascinated with him and the danger of Grand Prix motorcycle racing, it was a buzz. To have a British sporting icon who cheated death, did whatever it took to win, lived life to the full, and conquered the most dangerous sport in the world was inspiring.”

Will you be heading to your local cinema? or !