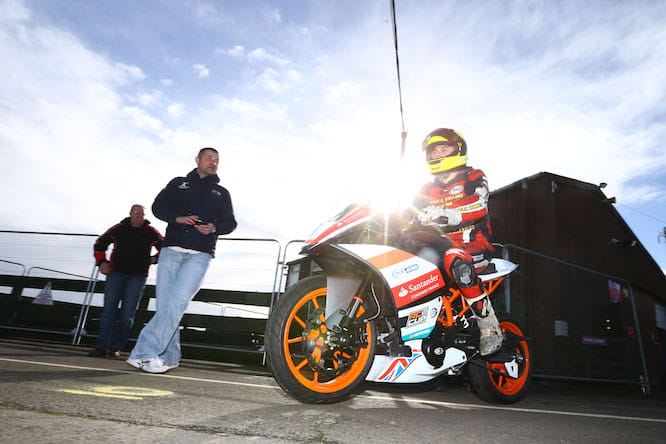 KTM are on the look-out for budding motorcycle racers between the age of 13 and 18 to join this year’s RC390 Cup series.

The Austrian manufacturer’s UK branch are inviting prospective young racers along to a free test day at Brands Hatch later this month to provide a taster of the RC390 cup bikes.

Introduced last year, the KTM RC390 cup runs alongside eight rounds of the prestigious British Superbike Championship. All riders are mounted on identical specification ‘Cup’ versions of the RC390 sports bike fitted with a host of KTM PowerParts and race-oriented accessories.

Places on the test day are strictly limited and riders will get one session on the iconic circuit on an RC Cup bike. All riders requesting a place are required to meet the eligibility of the class, which includes holding a Novice ACU Road Race licence. Series’ boss Steve Plater will have final say on the riders chosen.

The RC390 cup provides young racers with an ideal platform to showcase their talent, with Plater and the KTM team nominating two riders from the series to attend the Red Bull Rookies Selection event at the end of the year for a chance to compete within the MotoGP paddock.

“KTM is the READY TO RACE brand and is committed to the RC Cup programme, both in the UK and across the world. Thanks to MSVR, Santander Consumer Finance and our other fantastic partners, we are once again able to offer an affordable and high-profile junior road racing series within British Superbikes in 2016,” said KTM UK’s Marketing Manager, Simon Belton.

“With plenty of time before the first round in April, the idea of the Junior Test Day is to give young riders and their families and teams the chance to find out more about the series and sample the RC 390 Cup machine on track. If seeing is believing, then riding takes it to another level.”

Those interested in a place on the test day need to contact KTM UK Events Manager, Richard Ellis, at richard.ellis@ktm.com.

For more information on the series visit www.ktmRCcup.com