For sale: ex-Guy Martin superbike (three not so careful owners...) 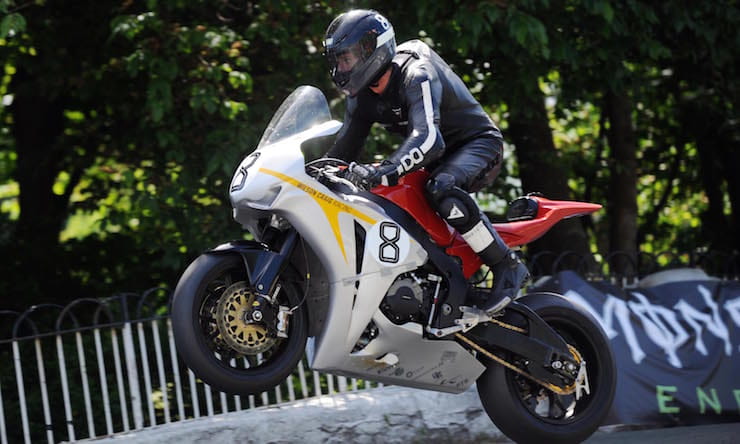 One of the most famous race bikes in the world has come up for sale – the Honda Fireblade ridden by Guy Martin in the movie ‘Closer To The Edge’.

Famous for it’s retro Sixties colours and cinematic scenes in the movie, Martin rode the superbike-spec CBR1000RR for the Wilson Craig Racing team at the 2010 TT, and famously destroyed it in a terrifying fireball at Ballagarey in the Senior race.

While the bike was more or less totalled in the crash, it was rebuilt using the same engine and used by the TV-star-to-be for the remainder of the 2010 roads season. William Dunlop took over the ride in 2011 and 2012, when the bike appeared in the movie Road, before Aussie Cameron Donald campaigned it in 2013.

The bike has now been fully restored with top tuner Chris Mahew refreshing the engine and the K-Tech suspension being overhauled. It has also been reunited with the striking red and silver bodywork used by Martin in 2010 and comes with a letter of authenticity and a selection of spare parts and wheels.

Not that we’re expecting this ‘Blade to turn another wheel in anger. Officially it is listed as ‘Price on Application’ but don’t expect it to be cheap. We understand that something like £30,000 is the going rate and based on the current rage for all things Guy, we’re expecting this ‘three careful owners’ Honda to be much in demand from collectors.

Interested? Drop darrengilpin@yahoo.co.uk a line and name your price.