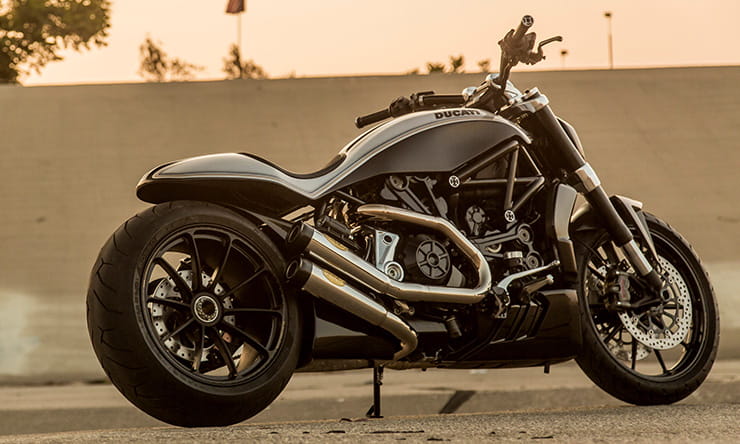 Unveiled last weekend at Sturgis, the world’s most famous rally for custom bikes, the RSD concept bike is a styling exercise that sees the Bologna cruiser given a Californian makeover.

Retaining the standard 1262cc L-twin engine and trellis frame, the Sands’ XDiavel features one piece bodywork, trick billet aluminium parts and a bigger 19” front wheel to give a more classic chopper style. As well as the one-off show bike, the renowned customiser has created a range of XDiavel accessory parts that are available through Ducati dealers.

"The XDiavel is a beast. A wolf in wolves’ clothing and a serious piece of speed equipment,” said Sands, who was a leading motorcycle racer before carving out a career as one of the world's preeminent custom bike builders. “We really wanted to pivot off all that amazing technology and not mess it up by tearing it out. So the bike is still very stock from a functional standpoint. The bike was a three-month build, with careful consideration and deliberation about the direction of the design. Ultimately, we decided to twist the aesthetic while retaining decidedly 'stock' bike functionality. I’m proud to say that’s exactly what we've achieved.”

This was Ducati's first official participation at the Sturgis, an event that historically showcases custom Harley-Davidsons and other American iron.