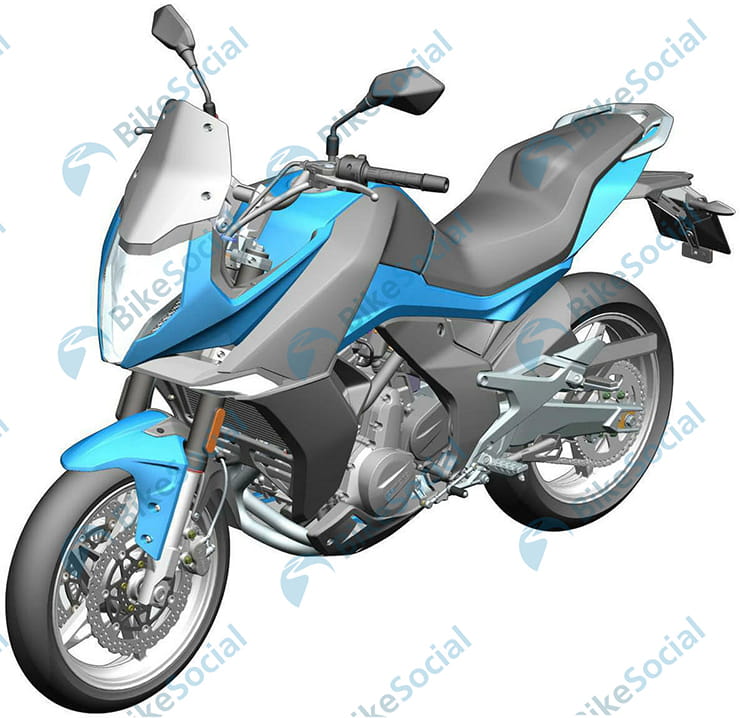 Riders thinking about buying a secondhand Kawasaki Versys 650 next year will have a tough decision to make. Why? Because sometime in 2017 we’re expecting to see this budget alternative on the market.

It’s the forthcoming CFMoto 650MT, likely to be sold in the UK under the WK Bikes brand. And in sharp contrast to some of the previous efforts from the Chinese-based firm, this one is something of a looker.

That transformation in appearance comes courtesy of a tie in with KISKA, the favoured design house of KTM. Knowing that, the crisp lines and razor-sharp edges of the 650MT make a lot of sense, falling very much into the KISKA school of thinking. The vertically-stacked headlight shape is also something that could easily grace a KTM.

Interestingly, CFMoto and KTM are already in alliance, which makes the KISKA connection easier to understand. CFMoto is responsible for assembling and distributing KTMs in the Chinese market.

KISKA’s styling has already appeared on the CFMoto 150NK and the newly-released, 2017-spec 650NK – expected to be sold here as the next-generation WK Bikes 650i.

While next year you’ll also be able to buy a KTM with a parallel twin engine for the first time, in the form of the forthcoming 890 Duke and 890 Adventure models, the CFMoto 650MT will be a rather less expensive option. 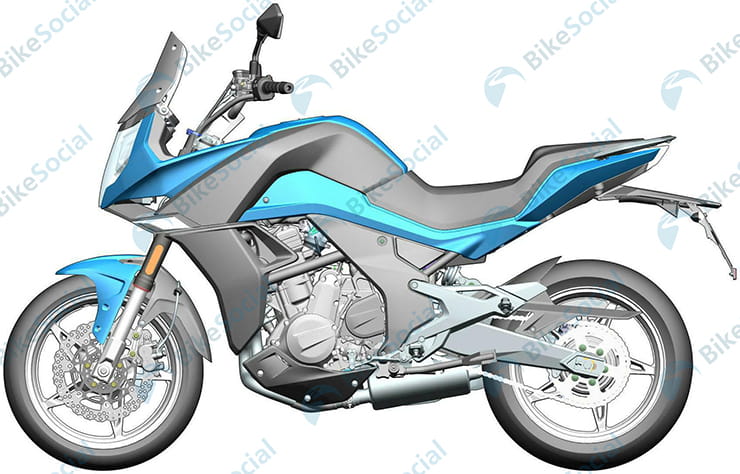 CFMoto has been working on the 650MT for at least the last three years, and its name was recently confirmed by a trademark filing from the company. Underneath the sharply-pressed suit seen in these images – which come from the bike’s official design patent – lies the familiar engine and chassis of the 650NK. That engine is incredibly similar to the Kawasaki ER6 engine used in the firm’s Versys, sharing not only its layout and capacity but also a lot of smaller design details and architecture. The frame is also a very similar design to that of the Versys, with a side-mounted rear shock and much the same layout of its tubular steel frame rails.

Unlike the 650NK naked bike, which has the same engine and frame, the 650MT appears to use an aluminium swingarm and clearly has upside down forks. These pictures also suggest it has a level of adjustability in its suspension, as there seem to be adjusters on the top of each fork leg.

In terms of performance, the existing version of the CFMoto 650 engine is good for around 70bhp, and while the new model will need to be tuned to ensure it meets Euro4 emissions rules in order to be sold in Europe in 2017, it’s likely to have similar peak power. Weight should be somewhere around 210-220kg fully fuelled, compared to 206kg in the same state for the 650NK.

We’re expecting to see the new 650MT at shows towards the end of this year, although being a Chinese firm CFMoto has occasionally used Chinese events to reveal its bikes rather than the more established European Intermot or EICMA expos.