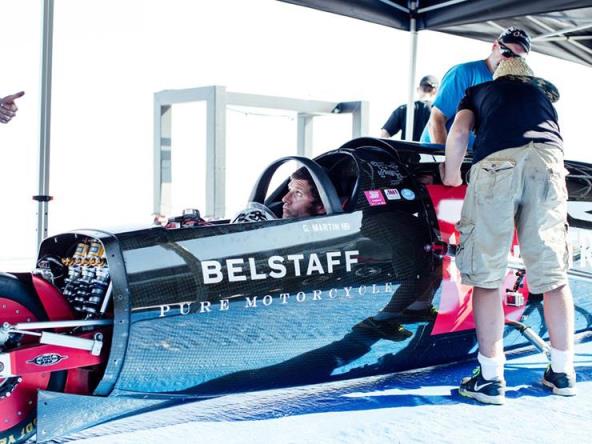 The less-than-perfect condition of the Bonneville Salt Flats in Utah have resulted in the Land Speed Record attempt by Triumph and pilot Guy Martin to now take place in the middle of next month.

Despite having a good course surface for testing the team felt that the salt wasn’t yet fully capable of supporting a top-speed streamliner run. In consultation with FIM course manager Mike Cook, the team are targeting the September date as the best possible opportunity for the optimal course conditions required for the record attempt.

“While conditions were some of the best I have seen over the last few years, we feel there is still some room for improvement. When chasing a record such as this on two wheels the conditions have to be the very best they can be, to give us the greatest chance of achieving the speeds we require to set a new record. We feel that waiting a few further weeks will provide us with even better conditions and put us in the ideal position to make our record attempt,” said Crew Chief and Triumph Infor Rocket Streamliner designer, Matt Markstaller.

During a practice session on 9th August the streamliner, piloted by TVs Guy Martin, set the record for the fastest speed attained by a Triumph at 274.2mph. However, the team’s sights are firmly set on the outright 376.363mph two-wheeled record held by American, Rocky Robinson, since 2010. 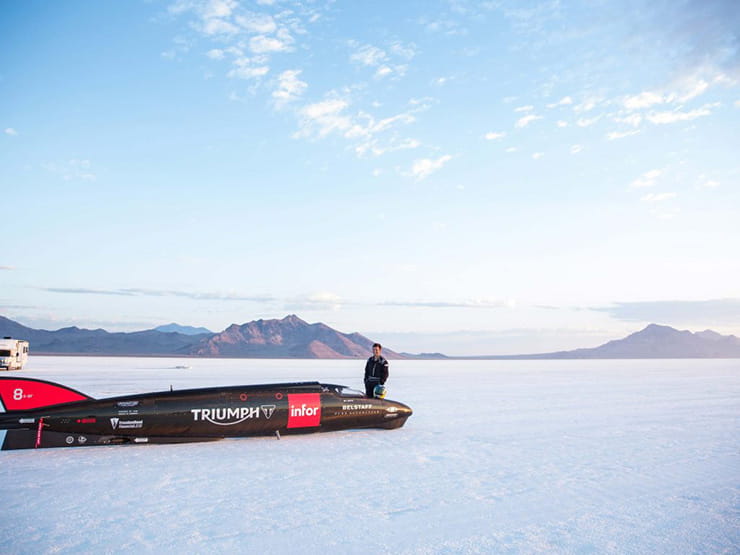 After setting the Triumph speed record, Guy Martin said, “It’s good and we are moving in the right direction, but it is just one step on the way to what me and team are here to do.”

When asked about Martin's performance, Markstaller commented: “We achieved a great deal during our test week at Bonneville and feel we are in a great position to move ahead with our record attempt. Guy settled into the streamliner very quickly and impressed us with the speed in which he mastered both the motorcycle and riding on the salt.

The bike itself is a work of art from the lightweight carbon and Kevlar monocoque construction, to its twin Triumph Rocket III engines running Garrett turbos and force fed methanol, the bike produces 1,000bhp and 500ft. lbs. of torque.

The Bonneville Speed Week event returned last week after a two-year absence due to the salt being too thin to run on, causing organisers to cancel.

Instead of using the organised Speed Week to make their record run, where due to the amount of vehicles and classes running, Triumph would only expect to get a maximum of two runs per day under their belt, the team have invested in hiring the facilities themselves. By getting the FIA and Bonneville Land Management involved in the organisation, Triumph have been able to make full use of their own time to run the streamliner as many as 8 times per day. 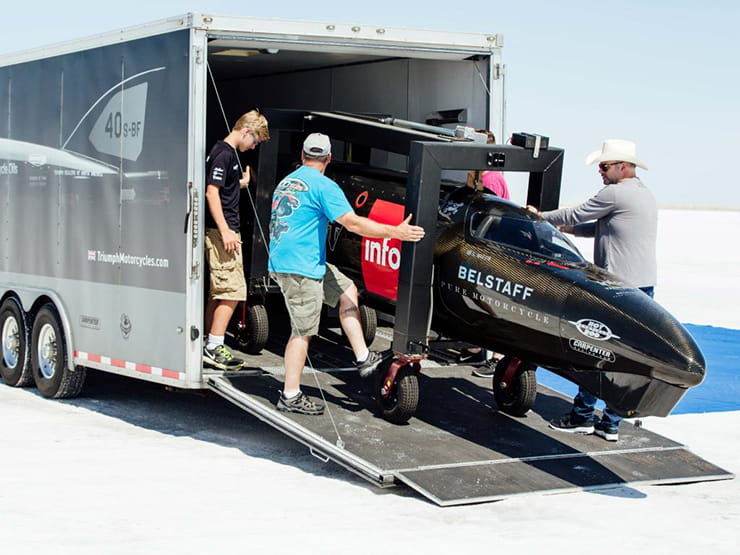