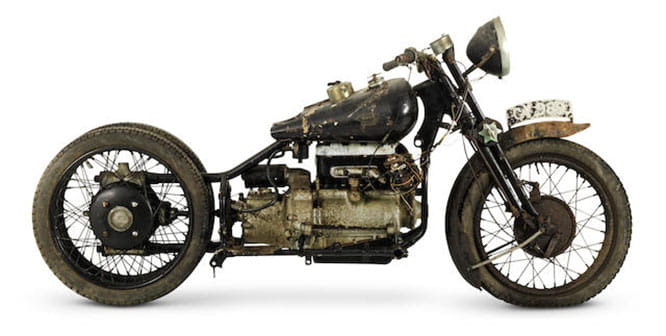 One of only ten Brough Superior BS4 models built set a new world record for price achieved by a British motorcycle at auction. It went under the Bonhams gavel at Stafford on Sunday 24th April for an incredible £331,090.

Even more amazing, is that the bike is incomplete and will require a total restoration.

Of the ten BS4s built it is believed to be one of seven that’s known to exist.

It was the first time this particular machine had come to market for over 50 years, and if it wasn’t for the Bonhams motorcycle team’s efforts it may well still be gathering dust in Cornwall, where it was discovered among a treasure trove of Brough motorcycles.

Ben Walker, International Director for Bonhams Collectors’ Motorcycle Department, said: “The Broughs of Bodmin Moor are the motorcycle discovery of the decade. They’ve caused quite a stir in the saleroom, with each one far exceeding estimate, allowing us to break our own world record for a British motorcycle sold at auction. The 1938 Brough Superior 750cc BS4 selling for £331,900 to a German bidder in the room.”

It wasn’t just the Brough Superior that raised the ceiling on previous achieved prices, a Vincent Series A project went under the hammer for £270,300 and a single cylinder Vincent Comet broke the £50,000 barrier.

The star of the show though was without the BS4. A pioneering machine in its day that utilised the four cylinder engine and gearbox from an Austin 7. It continues to be a pioneering machine and will be interesting to see what lies in wait for it’s next chapter.