Sheene GP machine set to go under the Bonhams hammer 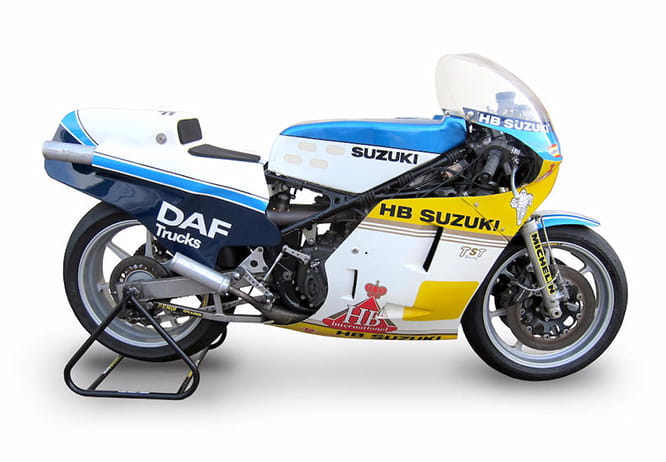 Barry Sheene, he managed to bag two 500 Grand Prix world championships for Suzuki, one in 1976 and then again a year later in 1977. Despite parting company later in his career to  ride GP’s for Yamaha, he’s mostly remembered for his time at the handle bars of various Suzuki racing machines.

This Suzuki RGB500 was the bike Sheene raced in 1983. Unlike the glory days of his earlier career, by 1983 Barry was forced to use non factory supplied machines to take his place on the grid. Worse still was he wasn’t racing directly for Suzuki Japan, instead his contract for the 83 season was with Heron Suzuki, the UK importers of Suzuki motorcycles.

Heron had purchased the bike for the 1983 GP season, and once the season was over they signed another Suzuki legend Mick Grant to race the 500cc two stroke. Grant spent 1984 campaigning  the RGB mostly at national events here in the UK, securing a 6th in the 1984 Shell Oils championship and a 1st at Macau on one of their rare trips overseas. The bike that’s fondly known as 10127, after its frame number, then passed through various owners and since 2005 it’s been owned by Tony Salt. Tony’s kept the bike in action and you may well of seen it at various classic events being ridden by Mick Grant. Other than a switch to 17 inch wheels and superior brake calipers the bike remains stock. The original parts form part of the Bonhams lot.

Sheene  passed away in March 2002 at the age of 52, his legacy though  is very much alive. 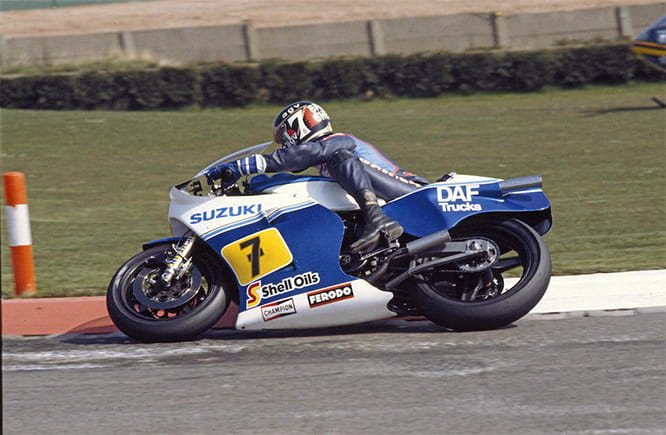 Sheene memorbelia is very sought after these days with anything from old leathers, helmets and autographs still able to create interest when offered for sale, it’s not everyday that a bike complete with provenance comes to market. Bonhams have already received a fair amount of interest in the ex Sheene Suzuki, both from the UK and around the world. Their catalogue guide price suggests sonewhere between £80,000 and £100,000 as what the bike could go for.

This Sheene Suzuki RGB500 is just one of the lots looking for a new home at the Bonhams auction that will be held at Stafford on Sunday 24th April. For more information on the bike and the event check the Bonhams website.