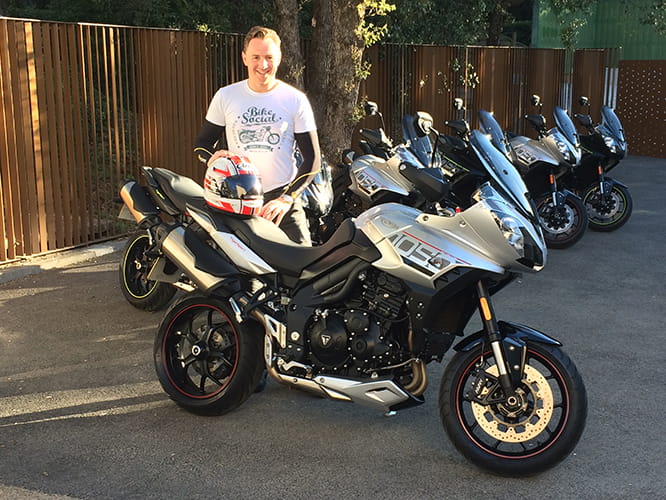 The newest bike in Triumph’s enormous multi-model assault on 2016 is the heavily updated Tiger Sport. Nestling into the Triumph range in between the more off-road focused adventure bikes in the Tiger 800 and the 1200cc Tiger Explorer, the new machine features the same next generation 1050cc, triple-cylinder engine from the updated Speed Triple with its 100+ changes from the outgoing motor.

Its focus is on being the ultimate all-rounder; a bike that can provide a comfortable, quick and cost-effective commute as well as having the capability of touring in style. Of course, it has all the relevant technical developments at the riders' disposal while housing enough power to offer a grin-inducing sportier ride around the B-roads. And with a very attractive price tag of a little over £10k, its certain to take a healthy fight to rivals from Japanese and Italian manufacturers like Yamaha's MT-09 Tracer, Suzuki's V-Strom 1000 and Kawasaki's Versys 1000. Plus, by Triumph's own admission, Aprilia's Caponord. 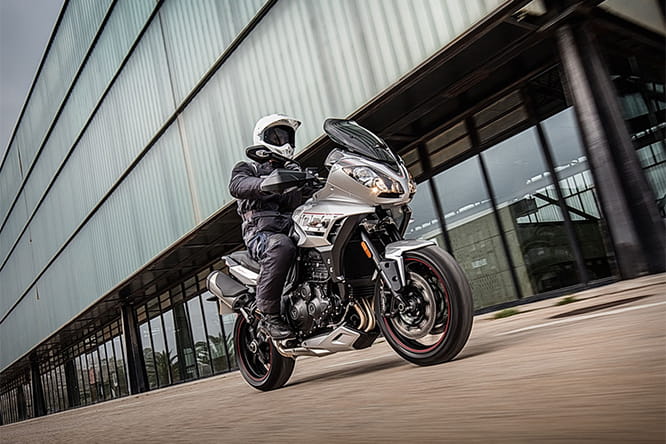 As with recent new model launches, Triumph have been fairly secretive with revealing the technical specifications, keeping them underwraps until after press have ridden the bike for a day so head on back for the full review which should be published within the next 24 hours which will include everything you need to know.

Bike Social has been invited to the riding launch in Nice in the South of France and taking the reigns today is our Web Editor, Michael Mann, who has just called in with these first impressions:

"The Tiger Sport's highly effective Showa front suspension is paired nicely with a balance that means handling is far better than its weight or height would suggest. The Pirelli Angel tyres aid that ability too.

The bike turns quickly enough while the perky three cylinder motor which, as you'd expect, not only sounds rich, but is far happier higher up the rev range."
He added: "Two of the riding modes (Road and Sport) differ only in throttle mapping and traction control while Rain mode limits power just under 100bhp. I've only ridden in the two sportier modes so around the hills north of Nice with the bike far happier and lively above 5000rpm. The red line is just over 10000rpm and the bike is geared long so hit the limiter in 2nd and you'll be braking the national speed limit. Of course that means the bike will be super frugal when cruising the motorways in top gear. Nissin brakes are razor sharp at low speed while the new, tinted screen is wider and more aerodynamically effective plus it's easily adjustable with one hand on the move."

Triumph say the engine and exhaust changes improve torque and fuel consumption and the bike will available in two colours: matt black with neon yellow detailing or aluminium silver.

A Triumph insider told us that the Tiger Sport bikes are rolling off the production line in Hinckley right now and they will be in dealerships ready for the nationwide season launch on 23-24 April.