25% of the bike is new while over the half of the LC4 engine components have been changed to make the impressively powered single-cylinder almost as smooth as a twin. We’ve been riding both new machines on the sublime roads of Gran Canaria as well as stretching the R’s legs on the Canary Island’s Maspalomas circuit at the press riding launch. 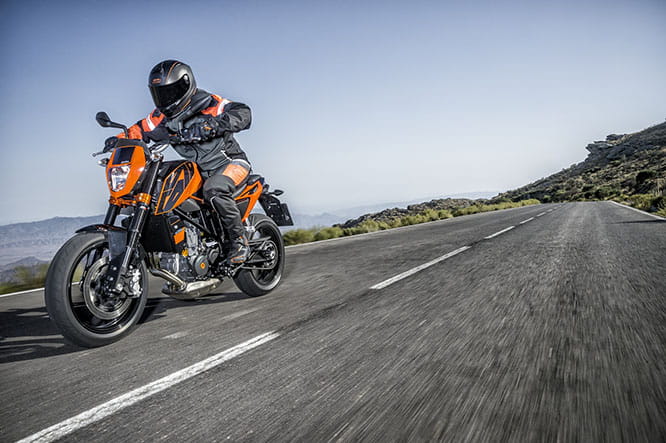 Having ridden the 73bhp standard model on the road for the first part of the day, here are Bike Social Editor Michael Mann’s first impressions:

“What is immediately apparent is how different the engine is compared to the previous model, KTM claim is smoother thanks to the upgrades including the new cylinder head for example, and certainly the combination of less vibration and that extra 1000rpm, the LC4 motor feels more lively and responsive. There's an abundance of torque which is a recipe for big fun when combined with the hyper-lightweight chassis.

So far we've covered a selection of 35 miles of Gran Canaria's narrow, winding, mountain roads with their switchbacks which are plentiful and thankfully grippy at the same time. There was a handful of dual carriageway miles thrown in too demonstrating the street bike's capabilities, even without earplugs the The standard 690 Duke in Street mode (one of the three - Sport and Rain are options on the standard model with the Track Pack) is a whole heap of fun, a word I don't like to use in reviews.  However, to justify its use on this occasion just consider a super lightweight bike with 73 bhp of punchy, burbly, single cylinderness. In fact the vibrations one would normally expect are barely noticeable. 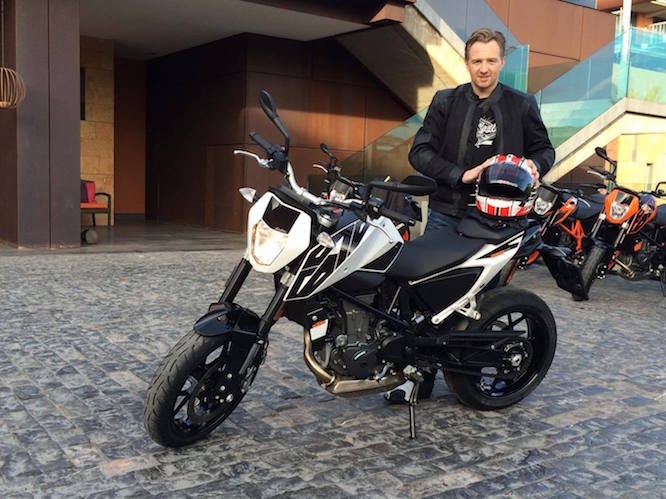 The throttle is lively particularly in Sport mode which also reduces traction control. The single disc front brake is controlled by a Brembo calliper and is sharp enough for the size of the bike. ABS is unobtrusive and at the rear, it can be disabled by switching the mode to Supermoto (when stationary). This also allows for stoppies.

The minimal weight and engine tweaks are the key to the 690 Duke offering so much confidence to any rider of any experience. While the low, narrow saddle is comfortable and raised bars offer a supermoto style riding position plus the WP suspension which is above average, it's the flickability of the bike thanks to its direct steering, decent set of Metzeler rubber and the punchy, revvy characteristics of the 690cc engine, which excels.

The only issue I've had so far is the position in the gearshift which I would move closer to the floor if I owned one.

I'll be riding the 'R' on toad and track soon so check back later for the full review.

Later he’ll be on both road and track with the 75bhp ‘R’ model complete with its taller seat height (865mm v. 835mm), longer suspension travel (150mm v. 135mm) and standard Akrapovic silencer among the differences. 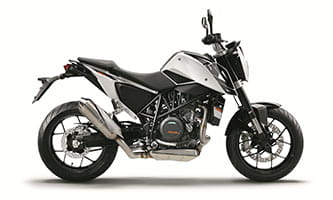 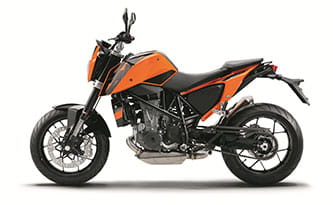 For the full review and video, stay tuned to Bike Social.