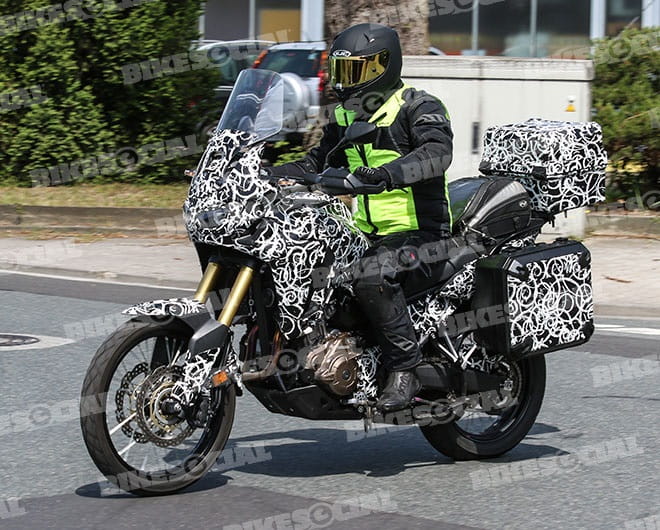 Honda's new CRF1000L Africa Twin has been spied testing in full-road trim in Germany. It’s still in disguise hence the black and white swirly paintscheme but it’s easy to see the bike in its full glory.

The new Africa Twin has already been seen in prototype form at last year’s Milan Show, and teased out by Honda in a host of videos entitled ‘True Adventure’ and with a couple of shaded out photos of the bike released officially.

But this is the first time the bike has been seen in all its glory being ridden on the roads near Honda’s R&D base in Frankfurt. Why they've put the black and white disguise on it when they've already displayed the bike in red beats me, but I guess Honda has its own reasons.

The current Honda Crosstourer is loosely termed an adventure bike but sits way more towards the touring end of the spectrum, hence the name. This is designed to do it all.

On the new Africa Twin it's easy to see what looks like a 21-inch front wheel and an 18-inch rear with spoked wheels and semi-off-road tyres showing its multi-purpose role. There’s a massive bash plate too, whether or not that’s made from metal to protect the bike or plastic remains to be seen.

The geometry of the new Honda appears to be quite lazy with kicked-out front forks, again showing Honda’s intention for the bike to be stable off-road rather than competing with the new breed of sports adventure bikes like the Ducati Multistrada and the KTM 1290 Adventure R.

You can also clearly see a development of Honda’s push-button or gear lever operated Dual Clutch Technology (DCT) on the side of the motor.

Insiders recently told me the bike has a new version of the DCT designed to be much more suited to off-road riding than the current DCT system. It stays in gear at low revs, rather than engaging neutral when coasting like some versions of the system fitted to the VFR1200 and the VFR1200-powered Cross Tourer.

Honda insiders also revealed that the new parallel twin 1000cc bike will use a new Honda cross plane crank motor with irregular firing order which gives improved traction and feel from the engine.

It is also rumoured to be fitted with Honda’s most advanced engine mode and traction control system ever seen on one of the Big H’s road bikes. The electronics have a massive array of settings for on-road, off-road, ABS, traction control and allowing the bike to slide, or not slide depending on riding conditions.

Sixty different combinations of are meant to be available to riders.

Styling is influenced by Honda’s CRF450 Rallye bikes, and there’s a high screen for good wind protection on the kind of long-distance rides this bike will be used for. There’s also hand guards for added wind protection. This bike obviously features the optional panniers and top box, plus a tail pack no doubt full of dataloggers as Honda head into final testing.

The new Africa twin forms part of Honda’s 2016 range of motorcycles. The new CRF1000L will be officially revealed  in November at the Milan Motorcycle Show.