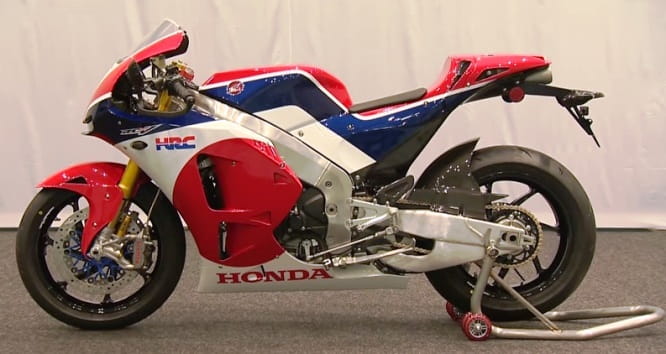 Honda’s highly-anticipated road legal version of Marc Marquez’s 2013 and 2014 MotoGP World Championship winning RC213V, known as the RC213V-S, has been ridden in public for the first time ahead of its official launch next week.

Reports are flowing that two-time World Champion and MotoGP Legend Casey Stoner will ride the bike at the official launch next week. However, at a Japanese Hillclimb last weekend Honda Racing Corporation’s (HRC) factory test rider, Hiroshi Aoyama, took the controls on a demonstration run.

Here’s a quick video of the bike being warmed up and moving off the line from WebMagazineTRACTIONS:

Honda has already referred to the bike which is almost identical to that which Bike Social ambassador Scott Redding rode last year as “the ultimate road going motorcycle”. Full technical details are set to be officially announced on Thursday 11th June at the launch ahead of the Cataluna MotoGP.

Bike Social will be at the launch in Spain so for the complete details of the production version of the MotoGP world champion’s race bike as well as interviews with the Head of Honda Motorcycles and the top project engineers behind the first Honda RC-designated road bike in 15 years, stayed tuned.

For a closer inspection of the production ready Honda RC213V-S take a look at this video: