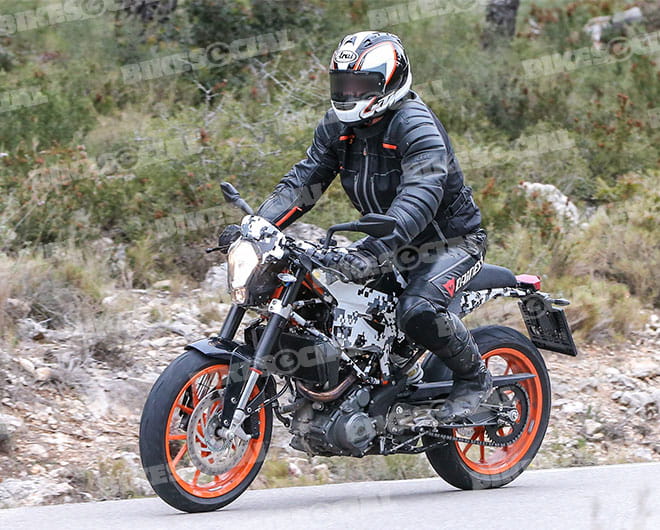 A production ready Husqvarna Vitpilen has been spotted going through final testing in Spain as the firm owned by KTM boss Stefan Pierer prepares for a 2016 model launch.

The heavily KTM Duke 390-inspired single cylinder 401 Vitpilen (Swedish for ‘White Arrow’ in case you were wondering) carries many similar components as its Austrian cousin including frame, swinging arm, WP suspension, wheels, even tyres. The most striking differences are the dropped handlebars akin to its cafe racer, street bike style along with a flat seat and lack of pillion footpegs.

The bike was first seen in public as a prototype launched at the Milan motorcycle trade show last November alongside Svartpilen (‘Black Arrow’) as the historic dirt bike firm made their announcement they’d be returning to its roots and only build specialist off-road bikes.

Despite its 401 name, which could well point towards its engine’s cubic capacity, we understand the 401 Vitpilen to use the 373.2 cm³ KTM motor. This in turn will allow the Husky to be A2-licence compliant or at least offer a relevant derestriction option given that KTM’s Duke and RC390 models are so learner friendly. That means a power output of no more than 43bhp and approximately 32kW of torque.

The Husqvarna 401 Vitpilen is based on a modern interpretation of the 1953 Silverpilen which was ground-breaking bike in its day as a road-going dirt bike. It’s equipped with road-going knobbly tyres and an aggressive off-road stance reminiscent of the original classic bike the idea was based on. You can also see KTM’s influence in the design with a hollowed out swing arm similar to the one on the KTM Duke range.

Husqvarna said: “The new Husqvarna 401s are very much new and progressive motorcycles, where advanced engineering meets authentic design. They bring back the honest and pioneering spirit of pure motorcycle riding from the ‘good old days’, into our modern times.”

The KTM 390 Duke is priced at £4,499, weighs 139kg (dry), returning an estimated 60mpg and has proved to be a popular choice throughout European cities and especially in India and the Far East.

A good choice for some commuting and town riding?