Shane ‘Shakey’ Byrne has started his 2015 race season by scooping a prestigious award from the RAC long before he has even thrown his leg over a race bike.

But the four-times British Superbike Champion went on to say: "I would trade all four for a world championship and given the right full-factory offer I would consider trying to achieve that in World Superbikes."

The highly experienced rider who has ridden in both MotoGP and World Superbikes, as well as excelling in the British Championship has had his achievements recognised by the Royal Automobile Club (RAC) who have awarded him the coveted ‘Torrens Trophy’ on January 27th at the prestigious RAC, in Pall Mall, London.

During a star studded ceremony hosted by former GP rider and well-known TV commentator Steve ‘Stavros’ Parrish, Byrne present with his wife, said he was “humbled” just to have been nominated. Despite being up against the likes of TT legend John McGuinness and rising MotoGP star Scott Redding, he came out on top of the judging panels’ votes as the man to carry off the prestigious trophy for 2014. 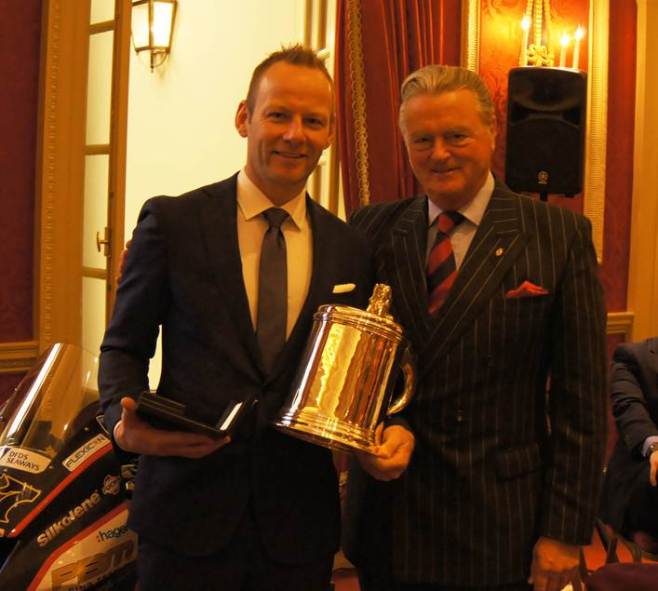 Byrne becomes only the eighth person to lay hands on the silver trophy which was first awarded in 1978 in memory of Arthur Bourne, a famous motor cycling journalist who wrote a column under the name Torrens and later became a vice-chairman of the RAC. Ben Cussons, Chairman of the Royal Automobile Club’s Motoring Committee, said ‘It is only awarded when we think justified.’

According to the rules, the trophy is awarded to an individual or organisation considered to have made an outstanding contribution to the cause of safe and skilful motorcycling in the United Kingdom. Or, to have made an outstanding contribution of technical excellence to further the cause of motor cycling in the UK. Alternatively to have shown outstanding skill in international motor cycling sporting events in the United Kingdom.

Byrne certainly fits the bill joining former winners, motorcycle racers James Toseland and last year’s winner Tom Sykes as he ended 2014 re writing the history books to become the first man in history to win the British Superbike Championship for the fourth time, eleven years after his first win. The 38 year-old Londoner, riding a Kawasaki for the Paul Bird Motorsport team added the 2014 title to his previous three titles (2003, 2008, and 2012) with solid riding throughout the season, beating Ryuichi Kiyonari on points. 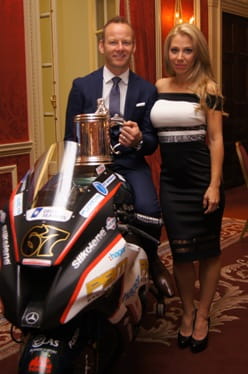 Looking fit and ready to race Shakey was clearly pleased to win the award. “I can’t say I was aware of it until they told me I was nominated, but given that some previous winners are world champions, I am really humbled, but at the same time really delighted.”

Dismissing questions as to possible retirement he said, “I am in great shape and mentoring a younger rider, which is helping to push me on and I am ready to race for a long time to come.”

“It was an easy decision to stay with the Paul Bird team (some of whom were present to see him lift the trophy) who really look after me and give me the tools to do the job properly.”

In answer to the question as to how he rated his fourth championship win he said, “I would trade all four for a world championship and given the right full-factory offer I would consider trying to achieve that in World Superbikes, but until then I will stay in BSB and try and win another. Certainly this award is a great start to the season and real bonus to my career.”

Parrish read out a number of congratulatory emails from the likes of motoring legend Murray Walker, James Whitham and last year’s winner Tom Sykes. Former recipient James Toseland, who was present to congratulate Shakey said: “It’s a great achievement to win the Torrens Trophy and be recognised by such an established and respected organisation as the Royal Automobile Club and he is worthy winner.”

It is course entirely appropriate that the award has come from The Royal Automobile Club which was founded in1987 and went onto form the Auto Cycle Club in 1903, which went onto become the Auto Cycle Union in 1947, now the governing body for motorcycle sport in this country.

It maintains its links with the motorcycle world through the Torrens Trophy in addition to the Dewar Trophy which is awarded for technical innovation and the Segrave Trophy for outstanding demonstration of the possibilities of transport on land, sea and air.

Previous winners of the Torrens Trophy include BMW in 1989 in recognition for their contribution to motor cycle safety through their development of their anti-lock braking system and in 1998 to myself, Ian Kerr, of the Metropolitan Police for 20-years of tireless work in promoting safe and responsible motorcycling, following on from the wheelie king Dave Taylor MBE.

The award signals a move by the organisation to once again be a highly visible presence in motorcycling and moves are in place to look at other awards in all areas of two wheels. Former racer Barrie Baxter from the RAC who chaired the awards committee said, that the trophy would once again feature heavily in yearly presentations rather than spasmodically as in the past!