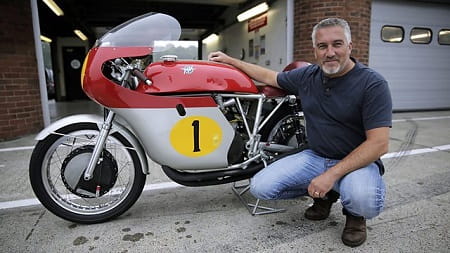 The BBC is set to honour former Grand Prix champion John Surtees in their ‘Racing Legends’ series this weekend.

Paul Hollywood, who bakes cakes or something like that, heads to Surtees’ Surrey home to meet his hero; the only man to  win Grand Prix world championships on both two and four wheels.

“John was a racer who preferred to be in the garage rather than the tabloids”, says Hollywood. “I think it’s a scandal that outside racing circles he’s not as widely known as this great British sportsman deserves to be.”

Surtees shows Hollywood around his private collection of race bikes (and cars)before the TV personality takes to the 37.73 mile Isle of Man Mountain Course aboard his Ducati 1199 Panigale with TT legend John McGuinness.

The show documents the story of Surtees’ early years riding for Norton before taking MV Agusta to their first ever 500cc Grand Prix World Title in 1956. The Briton went on to win a further six titles for the Italian marque before a move to Formula 1 in 1960. Making an impact in the four-wheeled world from the off, Surtees went on to win the 1964 Formula 1 World Championship for Ferrari. 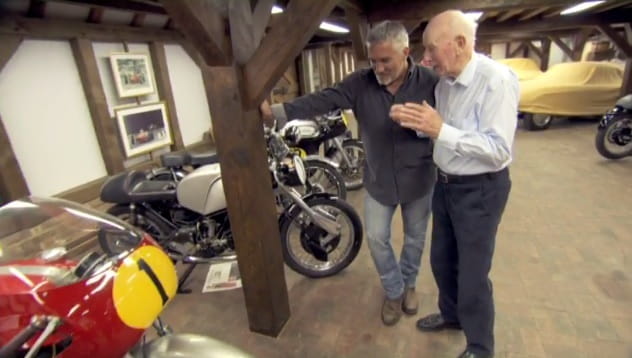 “It is basically a love affair” Surtees tells the presenter. “You come together with machinery, sometimes it’s a hate affair when they don’t work for you but other times things become special in your life.”

The programme synopsis reads: “Paul Hollywood meets one of his heroes, John Surtees. To get an insight into the life and times of one of Britain’s greatest living sportsman, Hollywood takes to the Isle of Man TT circuit to recreate some of Surtees’ finest races. He learns how Surtees went from humble beginnins to working for the aristocrats of Italian racing, Ferrari and MV Agusta. Now in his 80th year, John Surtees looks back on a life filled with danger, glamour and intrigue. It is a life that has seen both triumph and devastating personal tragedy.

“With contributions from Surtees’ wife and daughters as well as rivals and commentators, the programme gives an intimate and enthralling portrait of a complex man who survived and succeeded in an era when death and injury were an ever-present danger in racing.”