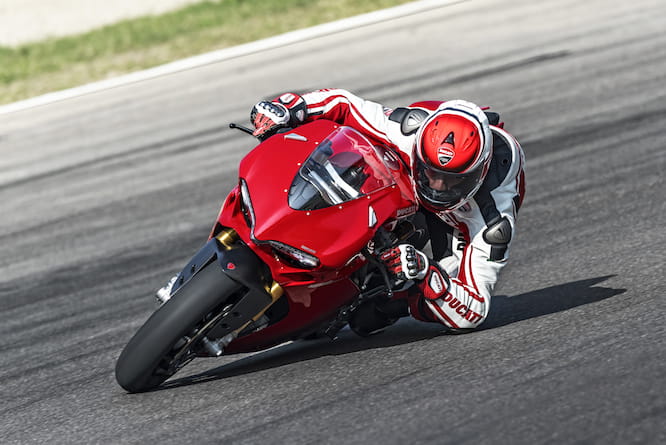 Riding the new-for-2015 Panigale 1299 S, test rider Alessandro Valia clocked a time of 1’55.3 around the iconic Italian circuit, compared to a 1’51.3 lap set by three-time World Champion Troy Bayliss on a World Superbike-spec Panigale 1199 in 2013.

"With the new Panigale I expected an increase in performance, but the final result has surpassed those expectations,” explained Valia. “During my first test of the 1299 Panigale S on the Mugello circuit, I managed to obtain a best lap that shocked me: 1'55"3!

“A really incredible time for a production bike - with lights, turn signals, and mirrors - made possible thanks in part to powerful thrust from the new 1285 cc Superquadro engine with 205 hp and monumental torque”.

Revealed in Milan late last year, the new 1299 Panigale boasts 205bhp from its 1285cc Superquadro engine, a dry weight of 166.5kg and a stonking great 106ft-lb of torque at 8750rpm. Like the new 2015 BMW S1000RR the new Ducati 1299 also features a new ABS system called ‘Cornering ABS’ that lets you brake fully-hard when leant over, and a lean angle indicator.

The swingarm pivot point has been changed to optimise grip from the rear tyre, and the steering head angle has been reduced by half a degree to give improved steering character and more agile cornering.

"Also fundamental are the improvements to the bike's frame,” Valia continued. “The new steering head angle and other changes to geometry have produced tangible benefits especially for large-radius curves, making the front end more stable, precise, and effective in finishing turns. 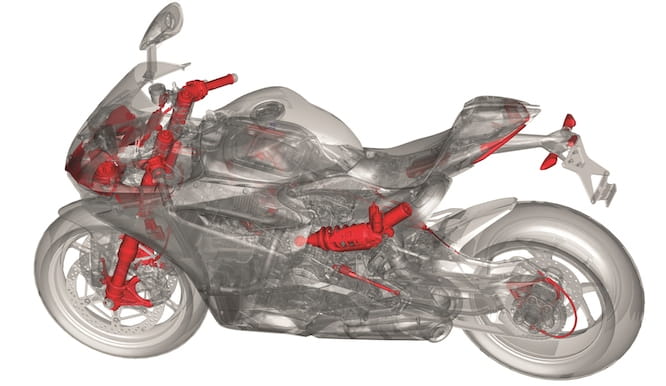 "Moreover, thanks to the new Ohlins Smart EC suspension, which also includes the very useful electronic steering damper, the 1299 is able to move seamlessly from maximum track performance to comfortable road use, making even the return trip to Bologna a pleasure, despite the bumpy roads which characterize the Giogo or Futa passes".

The bike’s 90-degree Superquadro motor has new 116mm pistons which have been redesigned along with the piston ring and the oil ring. It makes higher compression at 12.6:1 and together with the 116mm bore and 60.8mm stroke means the overall size of the motor is 1285cc.

A slipper clutch is hooked into a six-speed gearbox and now features what Ducati are calling Electronic Technology to allow the quick-shifter to be used on downshifts and upshifts.

The electronics package of the bike has been further improved to incorporate an Inertia Measuring Unit which measures acceleration and deceleration in relation to the bike’s angle of lean, and angle of roll and pitch forward when under braking or acceleration.

We’ll be getting a first taste of the bike at the Portimao circuit later this month, check back for our full review!