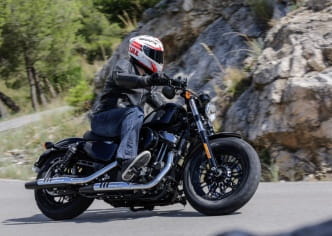 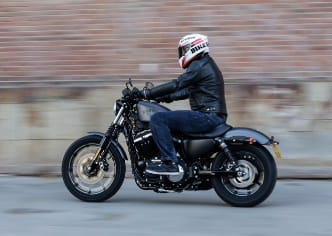 Two upgraded models and a brand new one form Harley-Davidson’s Dark Custom range of motorcycles for 2016 and all three were unveiled this week in Barcelona. Bike Social was on the scene to have a ride on each too.

The new cruiser is the Street 750 which was released in the USA this time last year but the European version has been revised with new front and rear brakes, new brake and clutch levers and revised positioning of the rear brake and horn. Aimed at introducing a younger audience to the iconic American brand, the bike uses a brand new liquid-cooled 750cc engine and will be available from 18th September at £5795.

The two biggest selling models in the Harley-Davidson ranges are the Forty-Eight and the Iron 883. Both have been upgraded for the next model year and just like the Street 750, they are designed as blank canvases for the customer to add their personal touch, just like 89% of Harley riders already do.

The Iron 883, with its air-cooled V-Twin, has all-new front and adjustable rear suspension, lighter-weight, black, 9-spoke mag wheels and improved seating to increase comfort. The rear suspension is adjustable through a 50mm range of pre-load with a spanner which is included under the seat. 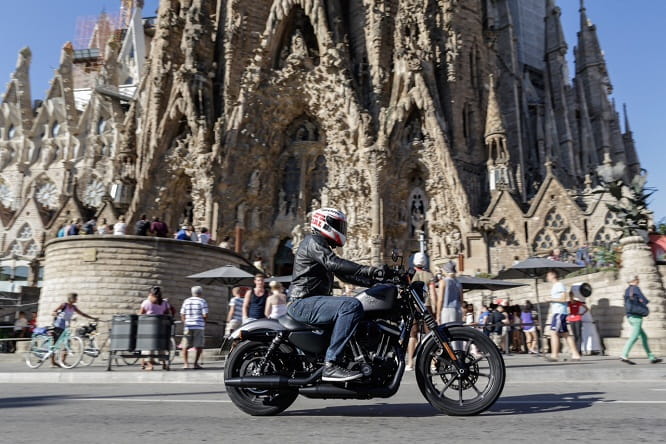 Overall the weight of the bike is now over 3.5kg lighter at 255kg (wet). ABS remains as an option but the keyless ignition and self-cancelling indicator signals sitting on each side of the handlebars remain on the 883 which starts at £7495.

Starting at £9675, the XL1200X, or ‘Forty-Eight’ as it is known, referring to the year in which the iconic peanut fuel tank was first used, also has refinements to its suspension. 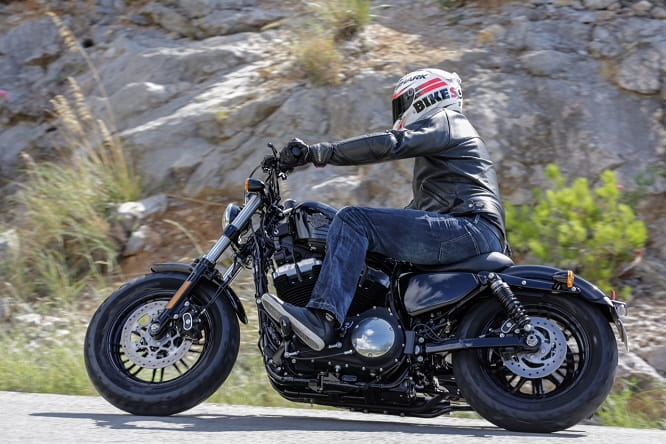 Similar enhancement to the 883, the Forty-Eight has new 49mm front forks with cartridge dampening plus adjustable (for pre-load) rear shock as well as new black, split 9-spoke aluminium wheels, a new seat and new colours. Billet Silver and Olive Gold plus the same Gold Flake Hard Custom Candy colours are now available on the most feet-forward of the Dark Custom range.

The 252kg machine still has its thumping great 1202cc air-cooled V-Twin providing the 70.8 ft-lbs of torque, the 5-speed ‘box with belt-drive and its rather useless under-bar mounted rear-view mirrors.