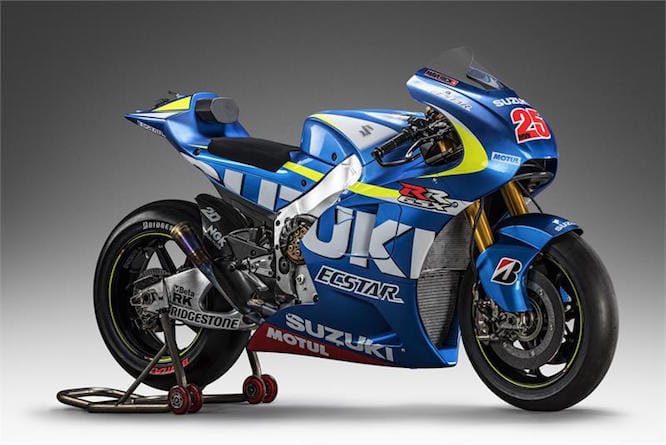 Suzuki are set to launch an all-new MotoGP bike for the road with the new GSX-R1000.

Insiders have revealed the new bike will use an all-new four-cylinder engine with the same off-beat firing order as the GSX-RR MotoGP bike.

The firing order is a similar set-up to the one used by Yamaha on the new R1.

It gives the rider better feel and traction, and creates a unique exhaust sound somewhere between a screaming four and the rumble of a V-twin.

The current bike’s last big update was in 2012, but the bike’s chassis and engine date back further than that. Although some dealers have told us that the GSX-R has had a resurgence since the latest breed of £15,000 superbikes went on sale this year.

Whether or not the new bike has the same level of technology as the multi-adjustable set-up on the 2015 R1 and Ducati 1299 Panigale, remains to be seen. But to be competitive the bike will need to make in the region of 200bhp.

Insiders who have seen the bike in Japan say it is tiny like the MotoGP bike and is set to be released in summer of next year, but shown for the first time at the Milan Show in November 2015.

However, it’s believed the bike will be released too late to make a full assault on the 2015 racing season.

Insiders say the firm plans to use 2015 as a development year to turn the bike into a Championship-winning race bike before making a return to World Superbikes full time in 2016.

Suzuki has been moving its marketing effort towards a new 1000cc superbike for an entire year. At last year’s Cologne motorcycle show the firm announced that its MotoGP bike would be called the GSX-RR to bring it in-line with the GSX-R road bike family.

Japanese bosses also told Bike Social that after a lull in new model development in the last few years, from 2015 Suzuki would be reintroducing new models each year in an aggressive attack to put Suzuki back on the map.