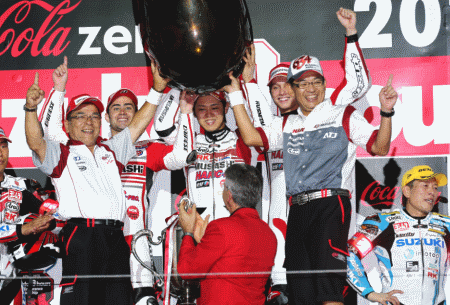 This past weekend saw the thirty sixth running of the prestigious Suzuka 8hr endurance race. This year, the Musashi RT HARC-Pro topped the podium with Takumi Takahashi, Leon Haslam and Michael van der Mark with a lead of 1’52 over the Yoshimura Suzuki of Tsuda, Aoki and Brookes. Team Kagayama scored an impressive third place with Yukio Kagayama, Kevin Schwantz and Noriyuki Haga – crossing the line just one lap behind the winner.

After a long four-way battle at the front of the field the Suzuki Endurance Racing Team (SERT) finished just shy of the podium. However, with this result, the SERT moves to the top of the FIM Endurance World Championship leader board. The Yamaha France GMT 94 Michelin Yamalube also performed well in Japan, placing fifth. David Checa, Kenny Foray and Matthieu Lagrive finshed just two laps behind the Musashi RT Harc-Pro.

Honda Team Asia (Makoto Tamada, Azlan Kamaruzaman and Yuki Takahashi) came out on top in the duel for sixth place with the Honda of Tosho Racing with Moriwaki (Tatsuya Yamaguchi, Shinichi Ito and Kazuma Watanabe).

The Monster Energy Yamaha YART finished eighth but made its mark at this 36th edition of the Suzuka 8 Hours when Katsuyuki Nakasuga shot his team into pole position by beating his own 2012 lap record in 2’06.817. The Monster Energy Yamaha YART held its own in the leading pack until a minor leak in the engine seal forced it into the pits for repairs. Given the fast pace of the leaders, it returned to the track mid-race in 11th place.

In tenth behind Honda Kumamoto Racing, Team R2CL (Suzuki) with Gwen Giabbani, Dylan Buisson and Masahiro Shinjo made a remarkable entry into the Top 10 after qualifying in 21st place, finishing a few seconds ahead of the Kawasaki of Bolliger Team Switzerland ridden by Horst Saiger, Roman Stamm and Daniel Sutter.

The start of the race was particularly eventful. The first of the top teams to drop out was the FCC TSR Honda. Having taken the lead, Ryuichi Kiyonari crashed almost three hours into the race suffering numerous broken ribs, forcing the team out of the race. BMW Motorrad France Team Thevent also dropped out after two crashes for Erwan Nigon and Jason Pridmore. Erwan Nigon was in the vanguard at the start of the race battling it out in on equal terms with Takuya Tsuda (Yoshimura Suzuki), Katsuyuki Nakasuga (Monster Energy Yamaha YART) and Takumi Takahashi (Musashi RT Harc-Pro).

At the end of the race, a shower added a touch of suspense but had no impact on the race leaders. The next leg of the FIM Endurance World Championship will be the 8 Hours of Oschersleben in Germany on 17 August.