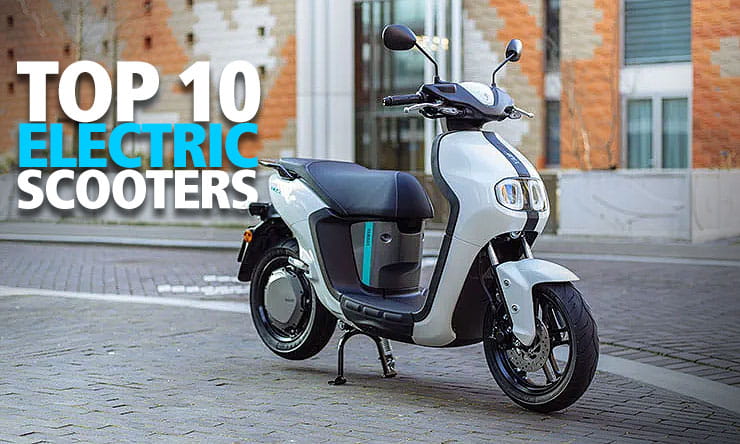 If there’s one sector of the motorcycle and powered two-wheeler market that currently seems to be growing faster than any other, it surely has to be that of the electric scooter.

Please note, we’re not talking ‘E-scooters’ here, those battery-powered scooter/skateboard things that are causing chaos around the country’s shopping centres. No, we’re talking ‘electric-powered’ but otherwise conventional commuter scooters of the type with leg protectors and underseat storage until now most commonly associated with the likes of Vespa and Piaggio.

Until fairly recently this type remained rare, expensive and unconvincing. In the last five years or so, however, there seems to have been an onslaught of new models and brands, many from the Far East but increasingly from the established manufacturers, too. And all offering a promising blend of zero emissions, virtually zero running costs, improving performance including 125cc equivalent speed and ranges approaching 100 miles, ever more swanky style, tempting tech including Smartphone compatibility and even increasingly affordable prices.

But which are the best? What do you get from your money? And which ones should you go for? Here’s our current Top 10 in price ascending order… 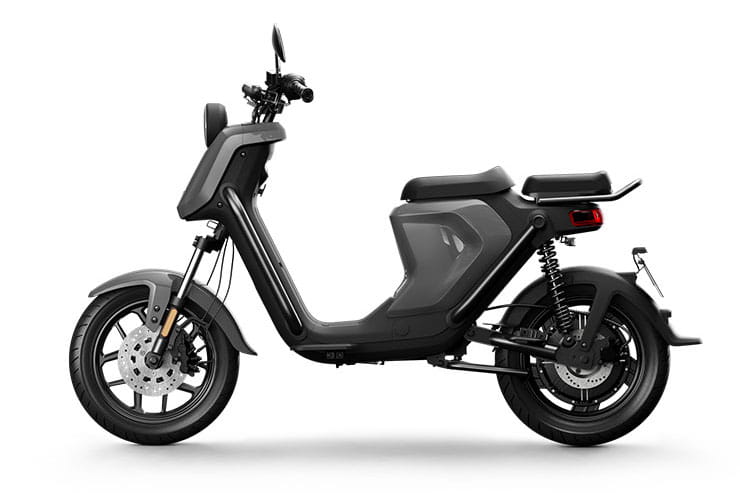 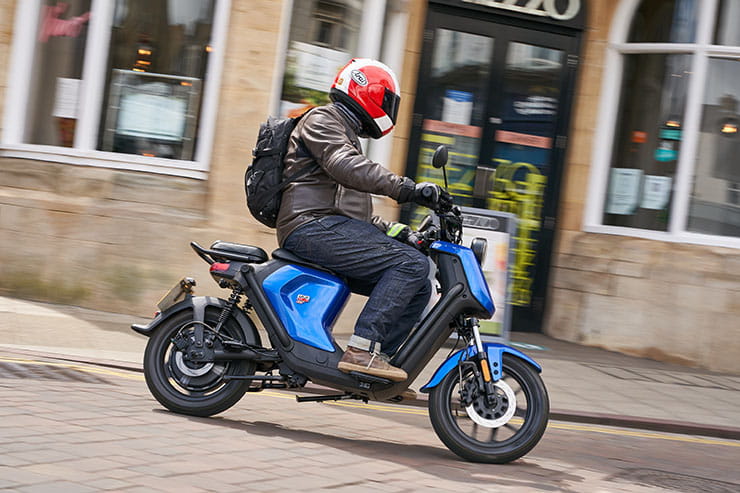 Chinese brand NIU was new (geddit?) to the UK in 2021, initially with the three-bike range of fairly stylish and high-tech electric two-wheelers. The clumsily named UQI is their most affordable offering at just over £2K and, in reality, is arguably more ‘bike’ than scoot as there’s no weather protection of luggage space. It’s also limited to just 30mph and so is AM/50cc compatible. But it’s decently made, has a Bosch hub motor in the rear wheel, is an absolute doddle to ride, has a refreshing and novel style all its own and we can see it becoming popular with city centre student types. Although new to the UK they also come with a two-year warranty. NIU also do the more conventional, scooter style series and its top of the range, 125cc equivalent MQI GT Pro Evo (see below). 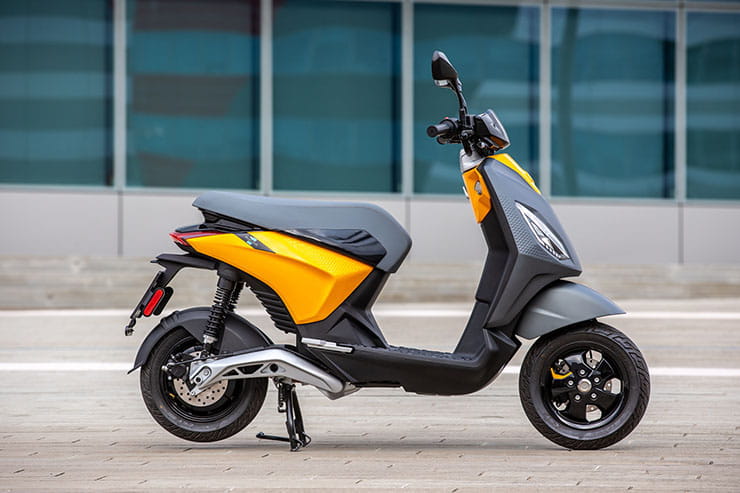 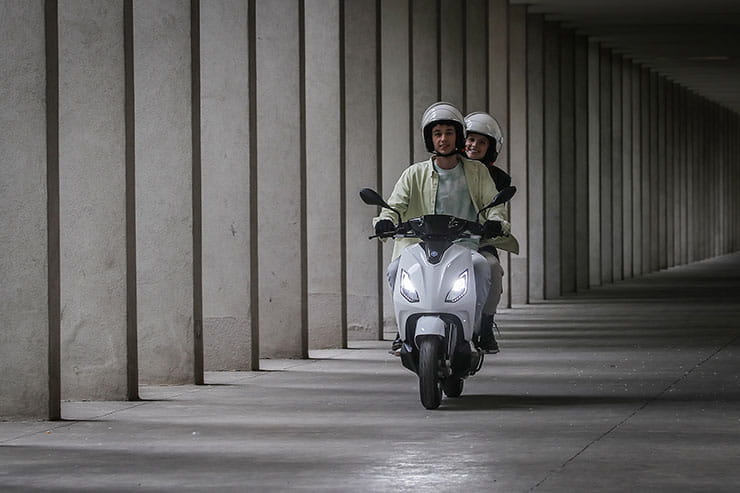 Proof that the traditional, major scooter brands are starting to get their heads around not only competent electric scooters, but, even more importantly, AFFORDABLE ones. Called simply the ‘1’, it’s been created by Italian scooter specialists Piaggio, was launched in 2022, conceived to be ultra-affordable and accessible to 16-17-year-old student types (we can see them buzzing around Rome and Madrid already) and comes in two roughly 50cc and 125cc equivalent versions. Yes, it’s basic but is still stylish. It’s a Piaggio so has a proven track record and an extensive, quality dealer network behind it and the ‘1’s performance, although not intended to be excessive, combines with practical features such as an easily removable and home-charge-able battery, to make it a credible transport ‘solution’. There’s a couple of performance options. The base ‘1’ has 1.2kW motor restricted to 28mph so is 50cc equivalent and can be ridden on an AM moped licence. The more premium model is the ‘1 Active’, costing about £250 more and which has a more powerful, 2kW motor and is capable of 38mph. Both have the smaller 10in wheels, simple steel tube frame and fairly basic suspension but they’re styled smartly, come in a choice of six colours, have LED lights and feature a smart, reversed LCD digital dash. There’s also keyless ignition and a USB charger socket. 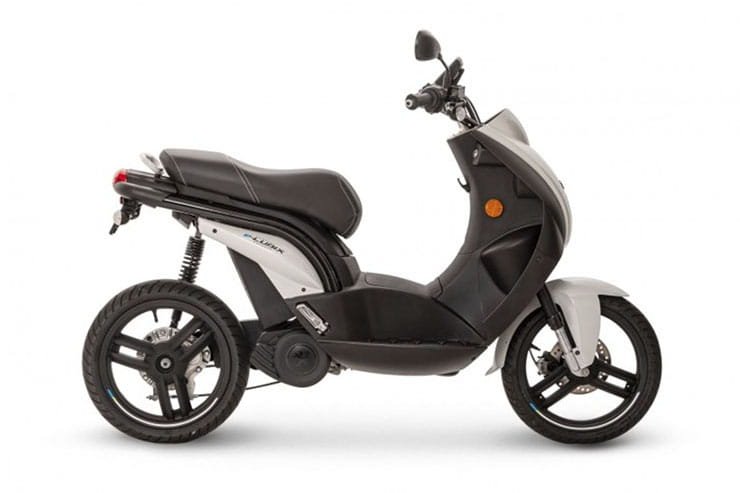 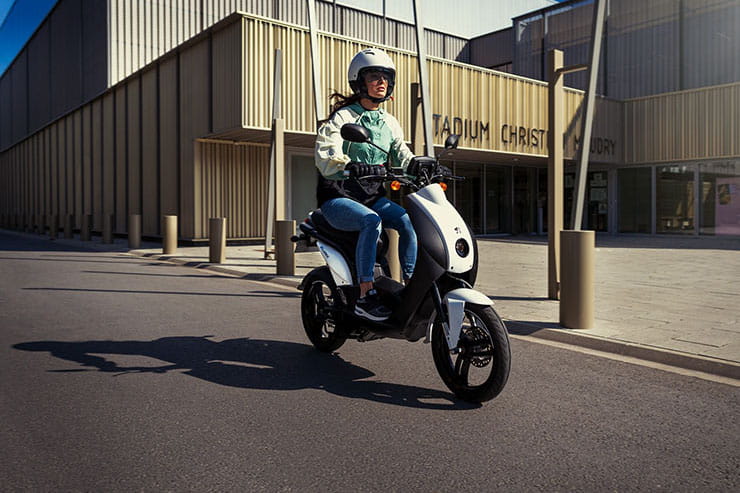 French scooter legends Peugeot may now be owned by the vast, Indian Mahindra concern but they’re still pioneers when it comes to scooter design and affordability – as its electric E-Ludix proves. Effectively half-scooter, half electric bike, for simplicity and affordability’s sake, it’s an electric version of the old petrol Ludix which was a huge success for Peugeot with over 250,000 sold worldwide. Admittedly, apart from the brand, price, and funky style there’s little to get excited about, but it’s AM compatible with a max speed of 30mph, has a range of about 30 miles and is proven and affordable and for many urban types that’s more than enough. 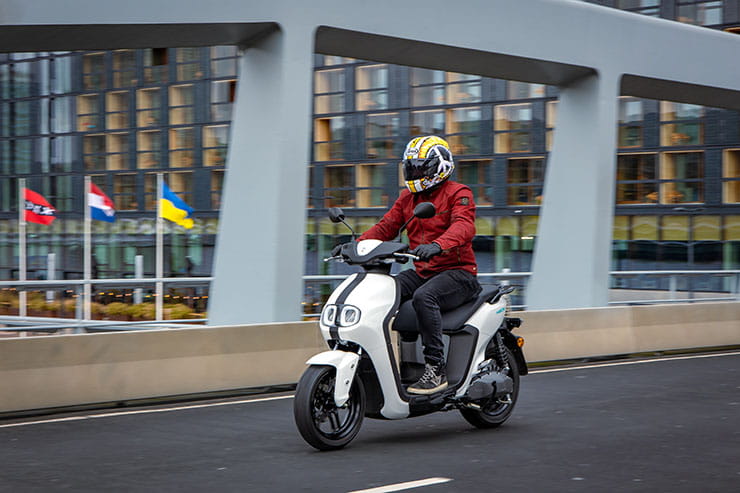 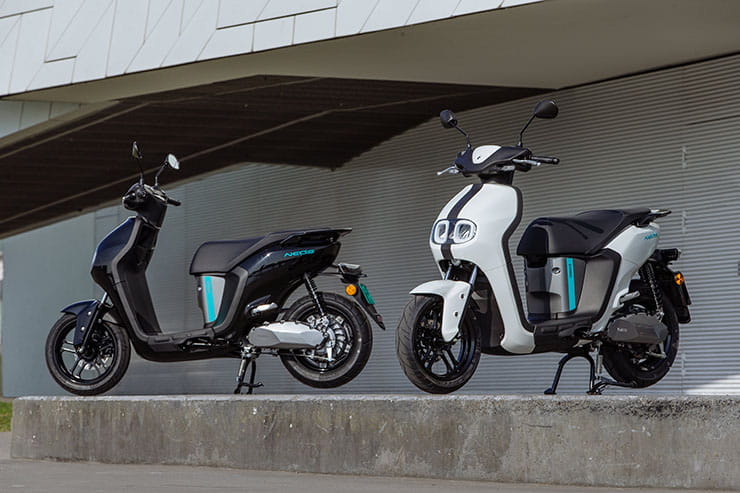 Also new this year, the NEO’s is significant mostly for being the first electric scooter from any of the Big Four Japanese brands – but there will surely be many, many more to follow. Like the others at this budget end of the spectrum there’s not much to brag too much about but then, costing just £3005, which includes on the road charges plus the Government’s £150 OZEV grant and having the name ‘Yamaha’ on its flanks, it probably doesn’t have to. As it is, the NEO’s is a 50cc equivalent commuter with smart, new, modern styling, a twin LED headlight ‘face’ and comes in plain black or white, both with blue accents that are intended to be the signature of all future Yamaha EVs. At its heart is the latest generation electric ‘Yamaha Integrated Power Unit’ (YIPU) with newly developed, hub electric motor, while a latest generation, removeable, 19.2Ah lithium ion battery is under the seat and provides a range of up to 37km (approx. 24 miles) although there’s an option for a second battery which raise this to approximately 68km (42.5miles). There’re also two switchable modes: ‘STD’ (40kph/25mph) and ‘ECO’ (22mph max), can be paired with your Smartphone via Yamaha’s dedicated ‘MyRide’ app and, with one battery, has 27-litres of underseat storage.

Read our review of the Yamaha NEO’s here 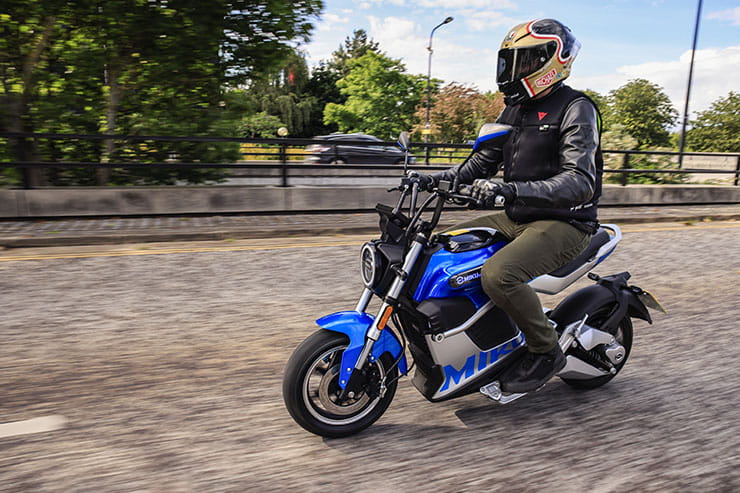 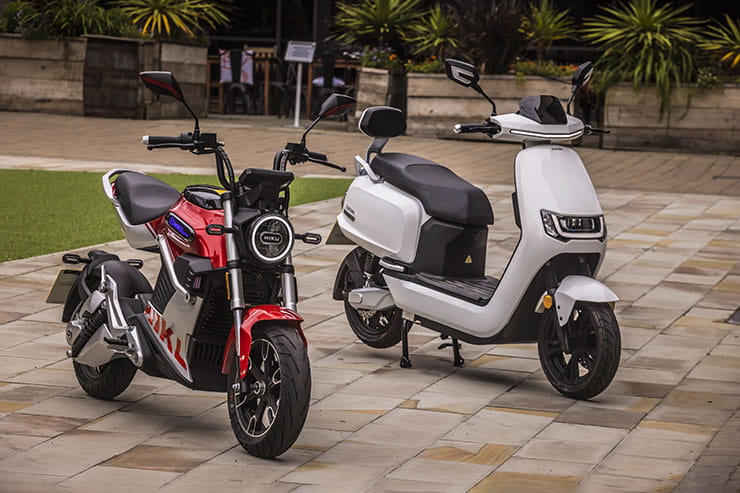 OK, arguably more ‘monkey bike’ than pure, traditional scooter but the Miku is so good and so convincing (something still rare in electric vehicles) that we had to include it here. The Miku Super is the range-topping electric bike from leading Chinese firm Sunra and with a similar, street savvy, mini 12" wheeled monkey bike style to Honda’s popular, petrol-driven MSX125 Grom, it’s equally ‘bang-on-trend’. There’s plenty of practical features (e.g. removeable twin batteries), competitive performance (three modes including Eco and a Grom comparable top speed of around 50mph) and features (LED lights, smart digital dash, Smartphone connectivity and even touch ID security). In short, for a monkey it has it all – but in electric form. It even undercuts the Grom on price and comes in pseudo Suzuki MotoGP colours!

Read our review of the Sunra Miku Super here 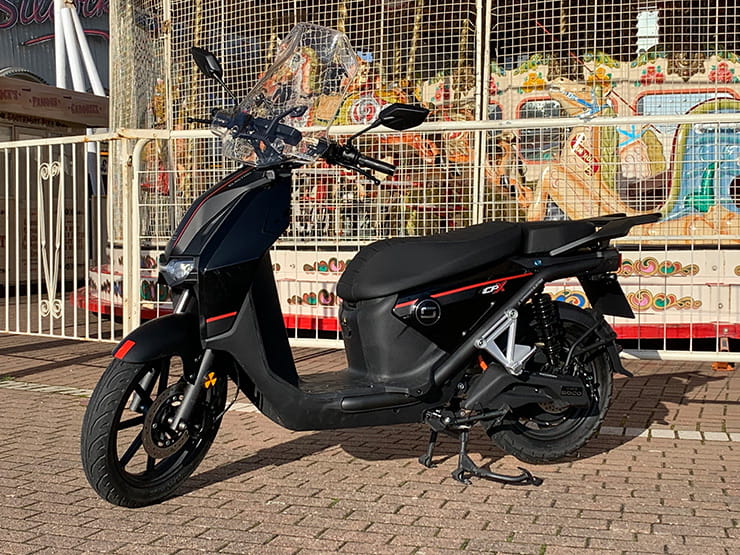 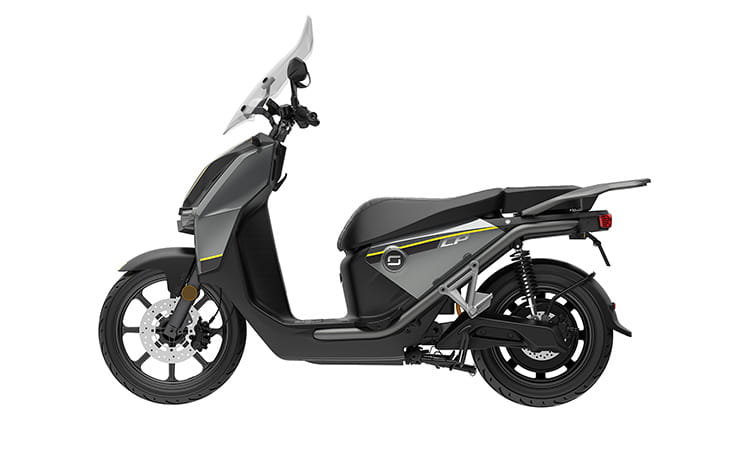 The Super Soco is one the best known and popular examples of a new breed of Chinese-built, 125cc-equivilent (ish) electric scooter. Its 4kW motor delivers a useful top speed of about 56mph. As standard it comes with a single lithium-ion battery that gives a range of around 44 miles but, like with increasing numbers of rivals) there’s the (£1000) option of adding a second removeable battery under the seat which doubles that range to about 88 miles (although on the downside it takes away most of the underseat luggage capacity. For commuter comfort it comes with a decent screen and plushly-padded seat as standard. A big, 16in front wheel and decent 14in rear means it’s bigger and more stable than most on the move plus there’s plenty of neat detailing such as LCD lights. Not the cheapest, certainly, of the Chinese offerings but arguably one of the most practical and long-legged. 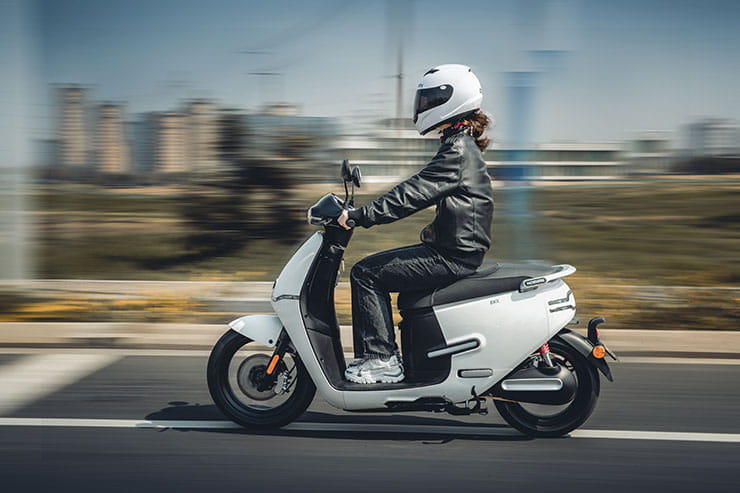 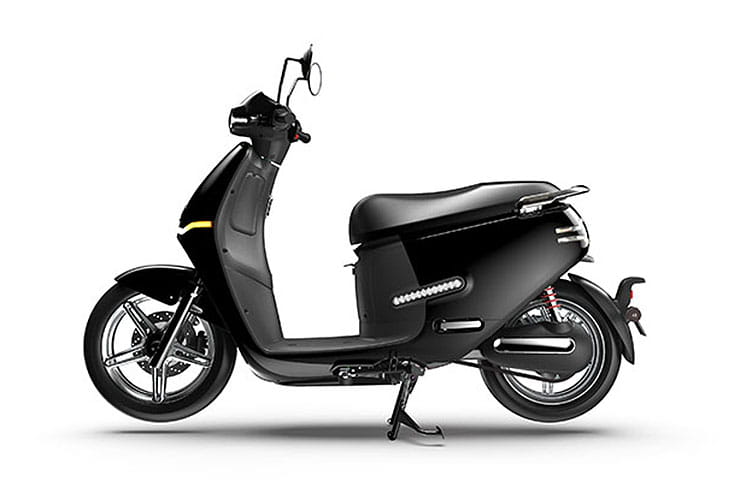 This Austrian-designed, Chinese-built urban run around may not quite have the performance and range of some rivals with a similar lineage, but it mostly makes up for that with attractive styling, solid build quality and neat design features that you won’t find elsewhere. In stock trim there’s just one battery giving a range of a little over 30 miles, but as with others this can be doubled up. Three performance modes help it be nippy enough, although it tops out around 40mph, the suspension is a little basic and there’s no Smartphone connectivity cleverness. That said there’s LED lights, keyless ignition, cruise control, a ‘reverse’ gear and chain rather than direct drive, enough, in fact, to give a certain pride in ownership some rivals can’t match. 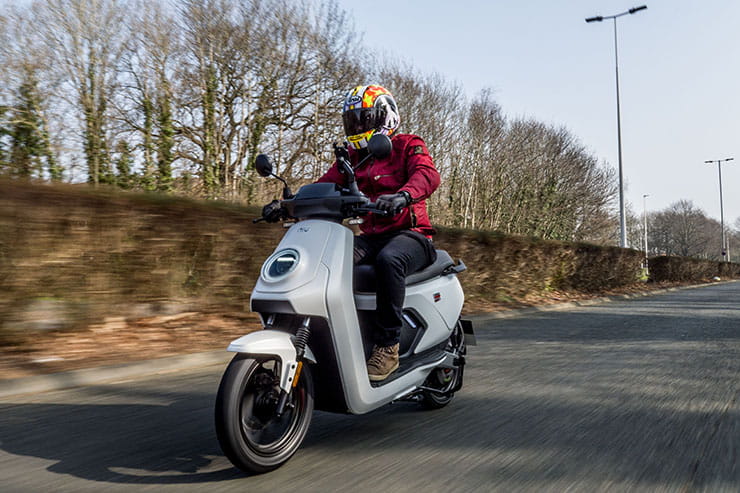 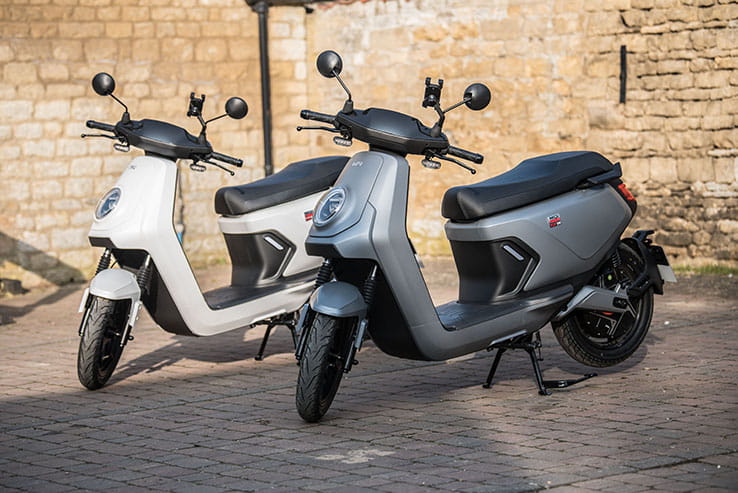 New for 2022, the MQi GT Evo is the Chinese electric brand’s new range-topper and the first with genuine 125cc-equivalent performance thanks to a new engine and battery. The Evo is essentially NIU’s existing MQi GT but with a more powerful 5kW rear hub motor, new, enlarged 72v battery and a fresh, smart, colour TFT dash which provides a few extra features via a smartphone app in place of the GT’s more basic LCD version. Everything else is the same. The result elevates the GT’s performance from, say, 100cc equivalent to around 125cc and ramps up the price. That said, there’s lots to like from the slick style, decent build quality and neat dash but its overall design is little changed. That said, with near-70mph performance, a 60-mile range, five-hour recharge, lots of neat features including a TFT dash and Smartphone app cleverness plus a £4K price, the Evo makes the choice between and electric or petrol scoot the most difficult so far.

Read our review of the NIU MQI GT EVO here 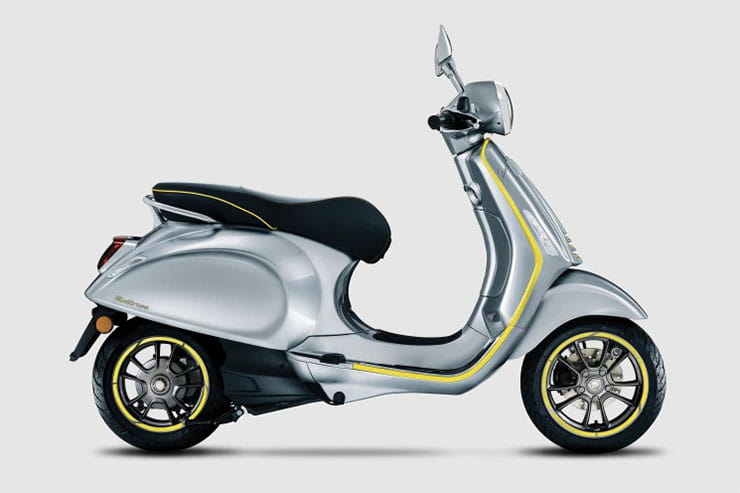 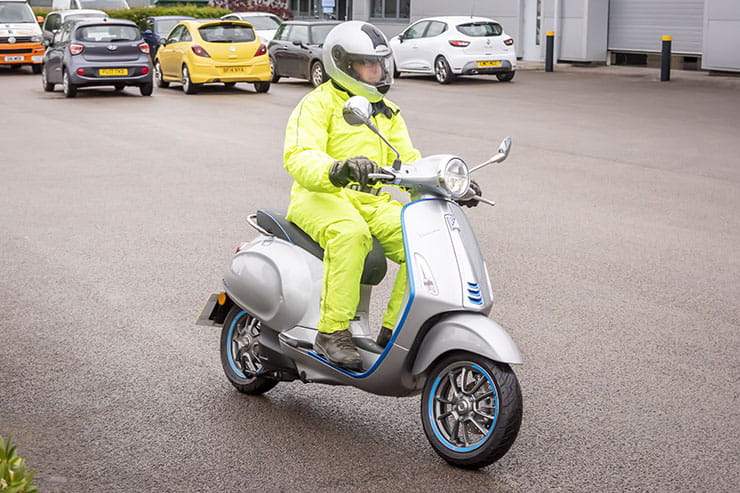 Vespa/Piaggio’s first entry into electric scooters pre-dates the budget-priced Piaggio 1 featured above and arguably offers only similar performance for a far higher price. But for those for whom the classic Vespa scooter brand resonates the strongest, the Elettrica’s extra kudos, style, detailing, and features make it more than worth the difference. Again, there’s two versions, an AM compatible, 30mph (45kph) version and an A1 compatible 45mph (70kph) version. Both are powered by a 3.5kW motor, have a 4.2kWh battery (that, sadly, isn’t removable), three modes (Eco, Power and, oddly, Reverse), Smartphone connectivity, LED lights plus, of course, plenty of classic traditional Vespa styling. On the downsides, that non-removable battery is a bit of a pain, performance and range isn’t great and it’s pricey. But as a stylish, high tech scooter statement they don’t come any greater.

Read our review of the Vespa Elettrica here 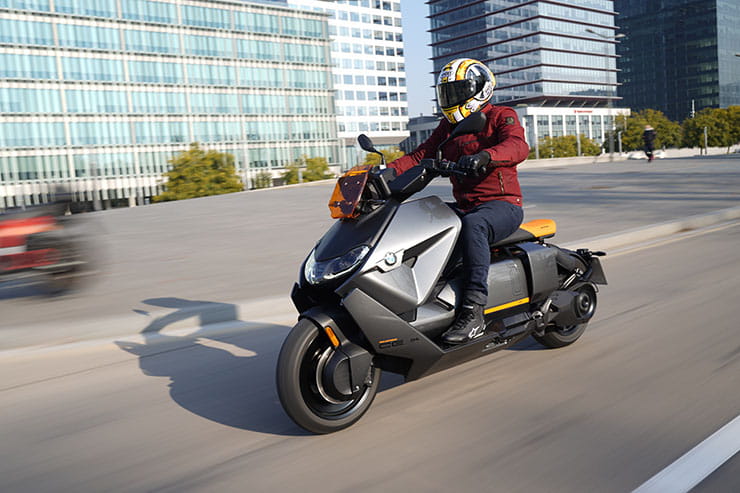 Also brand new for 2022 is the CE-04 – BMW’s boldest and most potent electric scooter so far. With an all-new, liquid-cooled, 31kW (equivalent to 42bhp) electric motor the CE 04 is among the highest performing electric scooters so far to come to market. Acceleration is vivid, a top speed of 75mph is possible and there’s a claimed range of 80 miles – although not at the same time. Add to that futuristic styling with a ‘floating’ seat that reminds of Judge Dredd’s ‘Lawmaster’, a massive 10.25in TFT dash (as borrowed from the R1250RT tourer) which includes navigation and Smartphone compatibility, LED lights all round plus the kind of build quality and detailing normally associated with the Bavarian brand and you end up with the fastest, most high tech and possibly most convincing electric scooter so far – unfortunately, however, it’s also one of the most expensive!

Read our review of the BMW CE 04 here