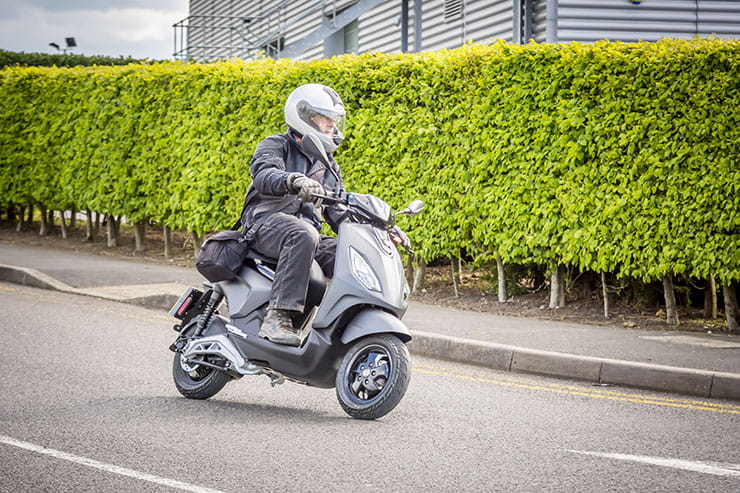 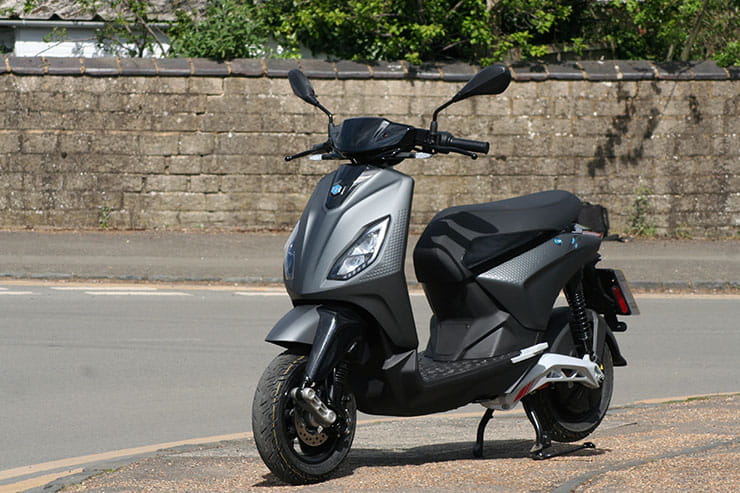 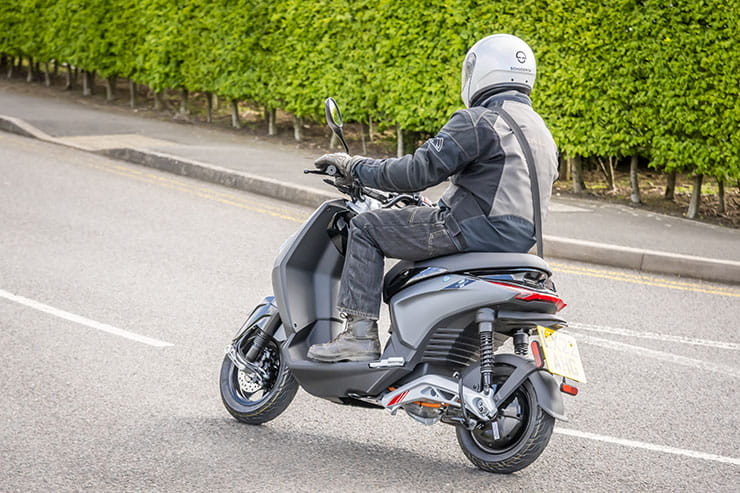 Piaggio (for which read Vespa) is no stranger to electric scooters. In fact, it launched the elegant Vespa Elettrica back in 2018. Clean, quiet and with all the style of a modern Vespa, it should have sold by the boatload to style conscious commuters. It didn't, because Vespa charges a whopping £6300 for the Elettrica, and that's in 28mph moped form. At more than twice the price of a typical 125, it hasn't found many buyers.

But now Piaggio has finally got serious about the electric scooter market, launching the 1 and 1 Active. Both are straightforward e-scooters in the modern mould, with lift-out batteries and all-round user convenience. Just as important, prices start at £2350, a lot more realistic than the Elettrica, which if you really want an authentic made-in-Italy Vespa with electric power, is still available. 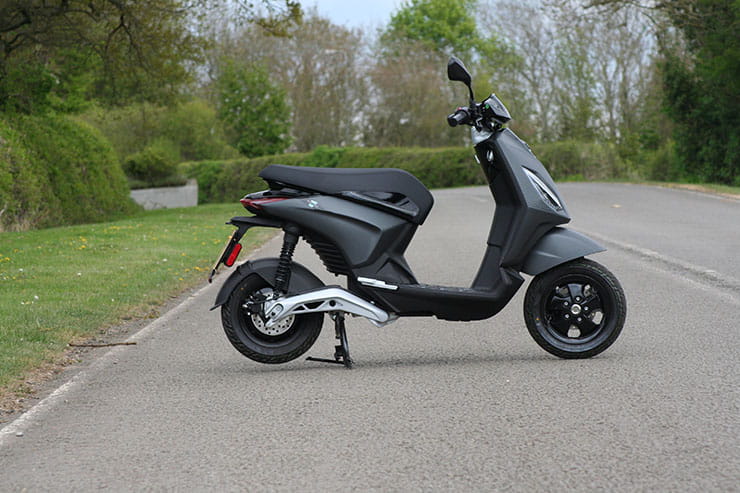 The Elettrica might have been priced as a premium scooter, but the 1 is far more mainstream, though in 28mph moped form it still costs a lot more than the budget equivalents from Super Soco and Lexmoto. It's listed at £2350 if you include the OLEV grant, while those two are well under £2000 – the Niu UQi just sneaks in under the two grand barrier as well.

The 1 Agility, with more power and a 38mph top speed, is in a bit of a class of its own, not as quick as the average A1-licence scooter but at £2500 with the OLEV grant it's also cheaper than most of them.

The 1 Active is available in six colour options; black, white, grey, yellow, green or blue. Though they actually have some flowery official names, who actually knows what Arctic Mix is?

It might seem odd to talk about power and torque with something as small as the 1, but these things still matter. The standard 1 is a bog standard moped with a 1.3kw motor and a 28mph top speed, but the Active is a lot more interesting.

A more powerful motor endows it with a top end of 38mph, which might not seem very much but makes a whole lot of difference when cruising a suburban 30-limit where a lot of the traffic is on 35mph or more. In this situation a 28mph moped just hasn't got enough speed to go with the flow, so you can find yourself being tailgated, cut up and generally treated with disdain by faster cars.

That doesn't happen with the Active, which can keep up 35-38mph on the flat and even crept up to an indicated 44mph downhill – going up the other side put a bit of a dent in speed, but it still didn't drop below thirty. So it's quite a bit slower than other A1-class electric scooters, all of which can manage at least 45mph on the flat, but the Active is a lot faster than a moped – let's call it 'moped plus.'  The only downside is that makes this an A1 scooter, so you'll need an A1 licence to ride it.

The Active isn't exactly quick away from the lights, but is faster than a moped, just about. This is all in Sport mode, but if you insist, Eco mode cuts speed to 18mph, which seems a bit pointless. Slightly more useful is the reverse mode, which creeps the scooter backwards out of a parking slot, accompanied by a warning bleep. 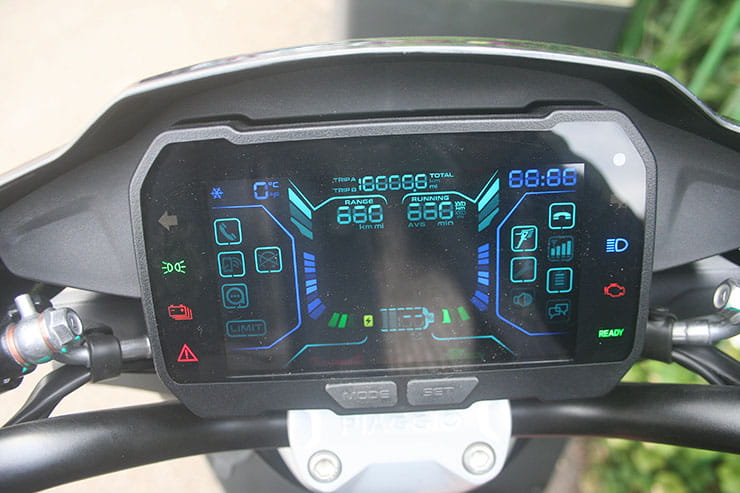 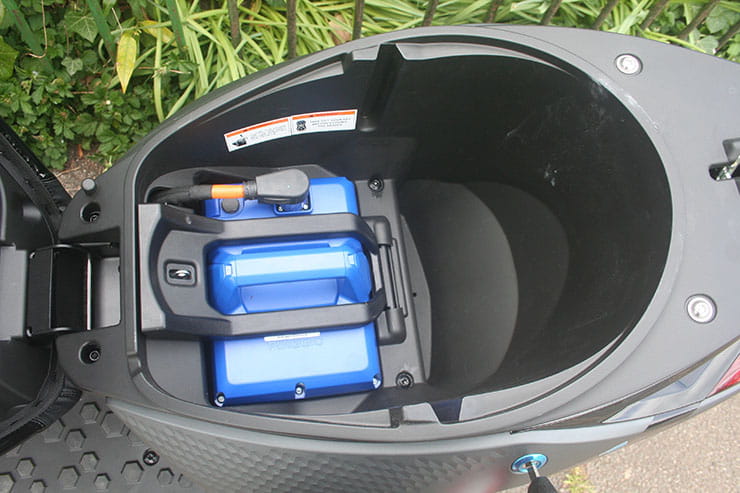 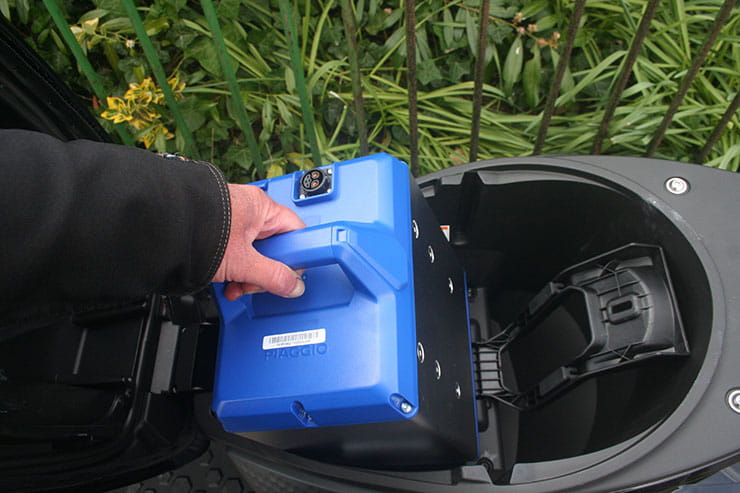 Nothing very startling here – the Active's rear hub motor, which fills the rear wheel, produces 2Kw, which is less than any other A1 scooter, but just enough for that 30mph-plus performance. As the motor is hub mounted there's no transmission to speak of – no belt or chain – which reduces the already minimal maintenance even further.

Piaggio offers two sizes of battery for the 1 – a 1.4kwh job for the moped and 2.3kwh for the Active, which gives the latter a claimed range of 42 miles in Sport mode. The test bike wasn't heading for those heights, having used 52% of its battery to ride 17 miles, according to the dash – so certainly 30 miles, maybe 35, should be possible. You can also pay extra for the bigger battery to make a 'long range' version of the moped – that's if your commute is long and you have a lot of patience. All of them have regen on the overrun, which puts a small amount of energy back into the battery on the overrun.

As ever with the smaller electric scooters, the battery can be charged either on board or lifted out and carried indoors. There's just one simple plug, though the battery does weigh 15kg, so it's quite a weight to carry up to a top floor flat. Still a lot more convenient than running an extension lead outside though. 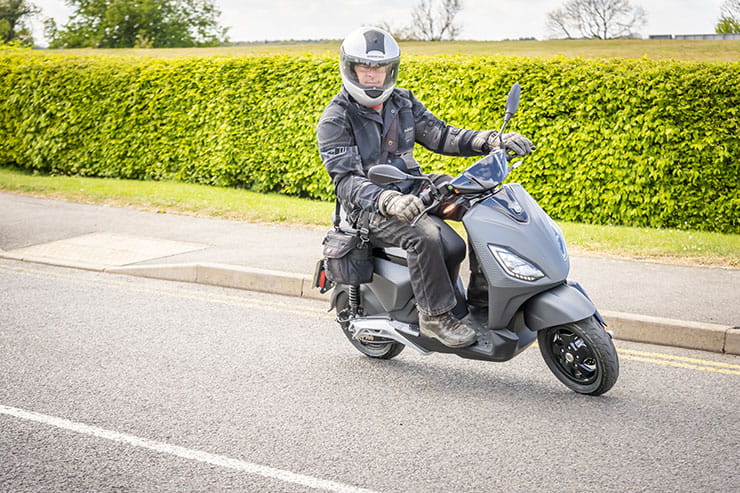 The Active might have 'moped plus' performance, but it's still not enough to tax the chassis, a conventional set up of single front suspension leg, twin rear shocks and 10” tyres. The whole caboodle weighs only 94kg, and it all feels nippy enough round town and stable at top speed. The Active keeps its moped dimensions, so it's slim little thing which can slip through gaps and filter past queues unobtrusively.

Discs at both ends are linked and operated by the left-hand lever – they're powerful enough and well balanced. Why linked brakes? Because mopeds aren't required to have linked brakes by law, but A1-licence scooters and bikes are. If you insist the right-hand lever will work the front brake on its own.

Moped dimensions mean that the Active is bijou machine, so it's a bit small for six-footers or those with a fuller figure. Having said that, I saw at least one substantial journo whizzing round on the Active during a Piaggio test day, so who knows. Either way, it was comfy enough for short trips, but only on your own – although the scooter has what looks like a pillion seat, it's not designed for two and there aren't any pillion pegs or grabrail. Solo trips only please. 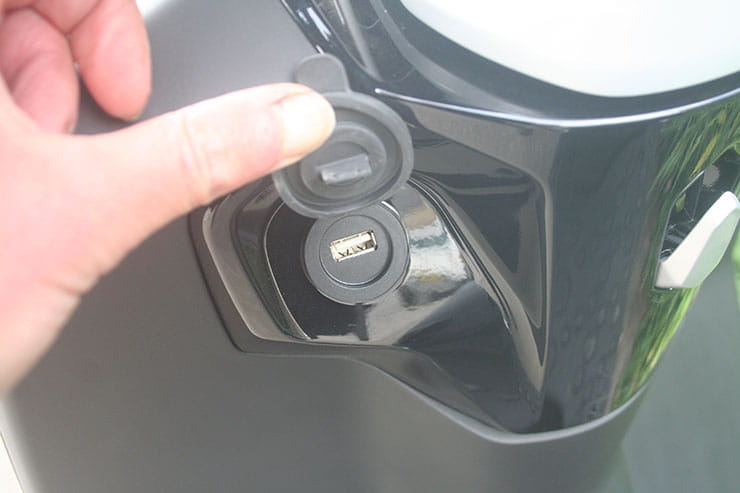 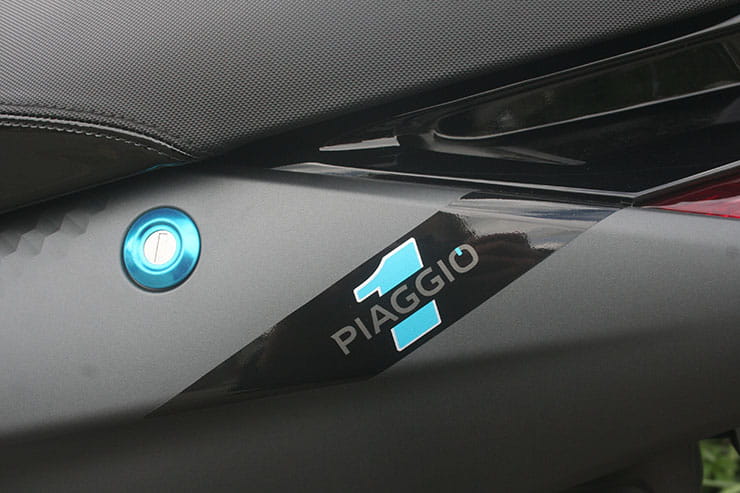 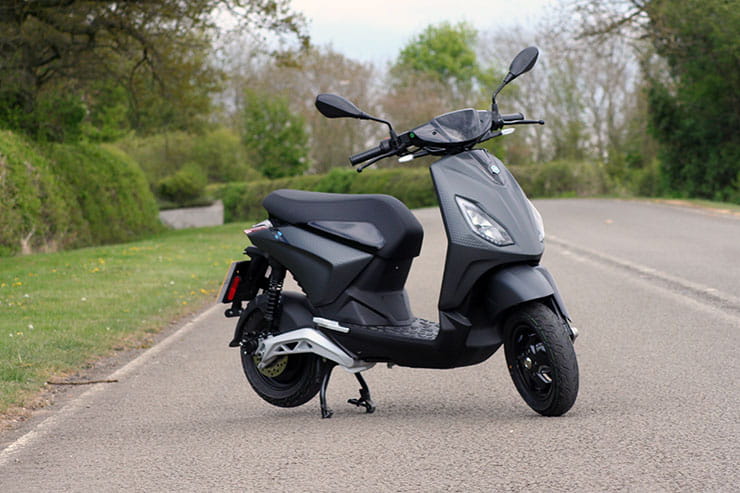 You won't be surprised to learn that the Active isn't groaning with rider aids and extra equipment, but then this is a budget scooter so it has a sprinkling of useful bits and pieces instead. The reverse mode counts as an aid, there are LED headlights and ignition is keyless with an alarm. There's also a USB socket and a bag hook. Best of all for an electric scooter, there's a bit of luggage room on top of the battery, big enough for an open-face helmet. I can't think of another small e-scooter that does that, because usually just about all the underseat space is taken up by battery.

The 5.5in colour LED screen is pretty neat, with a big speedo and clear battery meter which shows your charge running down in nice, gradual percentage points. A flickering display of segments show how much energy you're using or putting back into the battery, but it's fairly pointless.

And finally in the 'extra equipment' stakes, for an extra £250 you can have the 1 in a special paint job penned by Chinese artist Fen Cheng Wang. Not exactly a household name over here, but it looks quite swish. Or save £250 and have the 1 in white or black.

It's good to see Piaggio taking the burgeoning electric scooter class seriously at last. The 1 is a modern competitive scooter which does the job. The moped version is still a bit pricey compared to some, but the Active looks like good value, holding the middle ground between mopeds and the faster A1-licence scooters. Like we said, it's 'moped plus.' 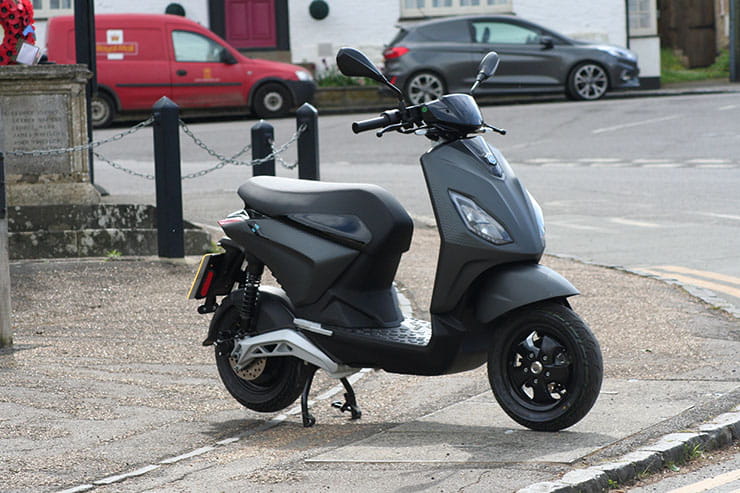 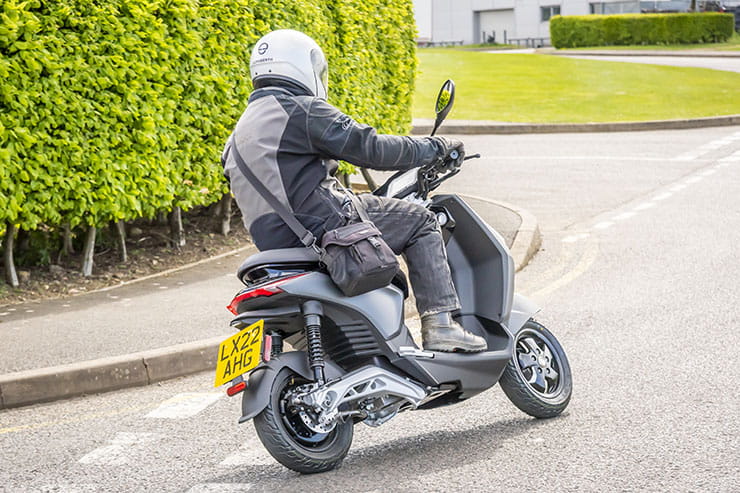