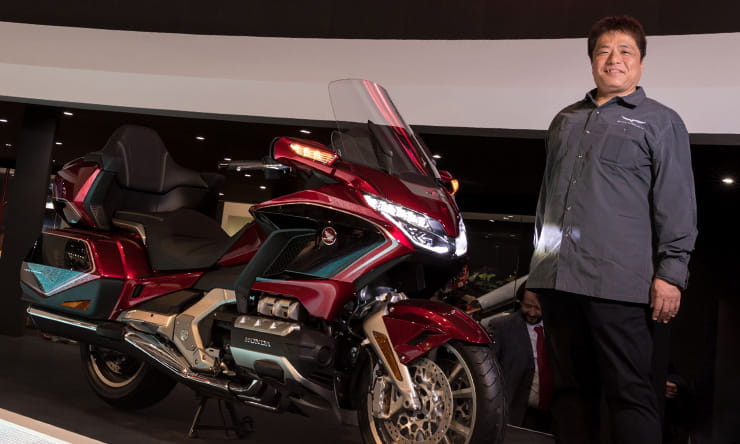 Was losing weight a key part of the development, and what were the challenges?

Yes, it was the number one priority. The biggest challenge was to change our own perception – The Gold Wing was always seen as being the ‘king of motorcycles’, but that also brings the obligation to have all the options, all the equipment and all the features.

What we first did when we prioritised lightweight design was to dismiss that status of being a king, and changed the concept to being the Honda premium motorcycle. We then concentrated on what qualities such a motorcycle requires. From there it’s really just tiny bits of engineering in order to get rid of weight. 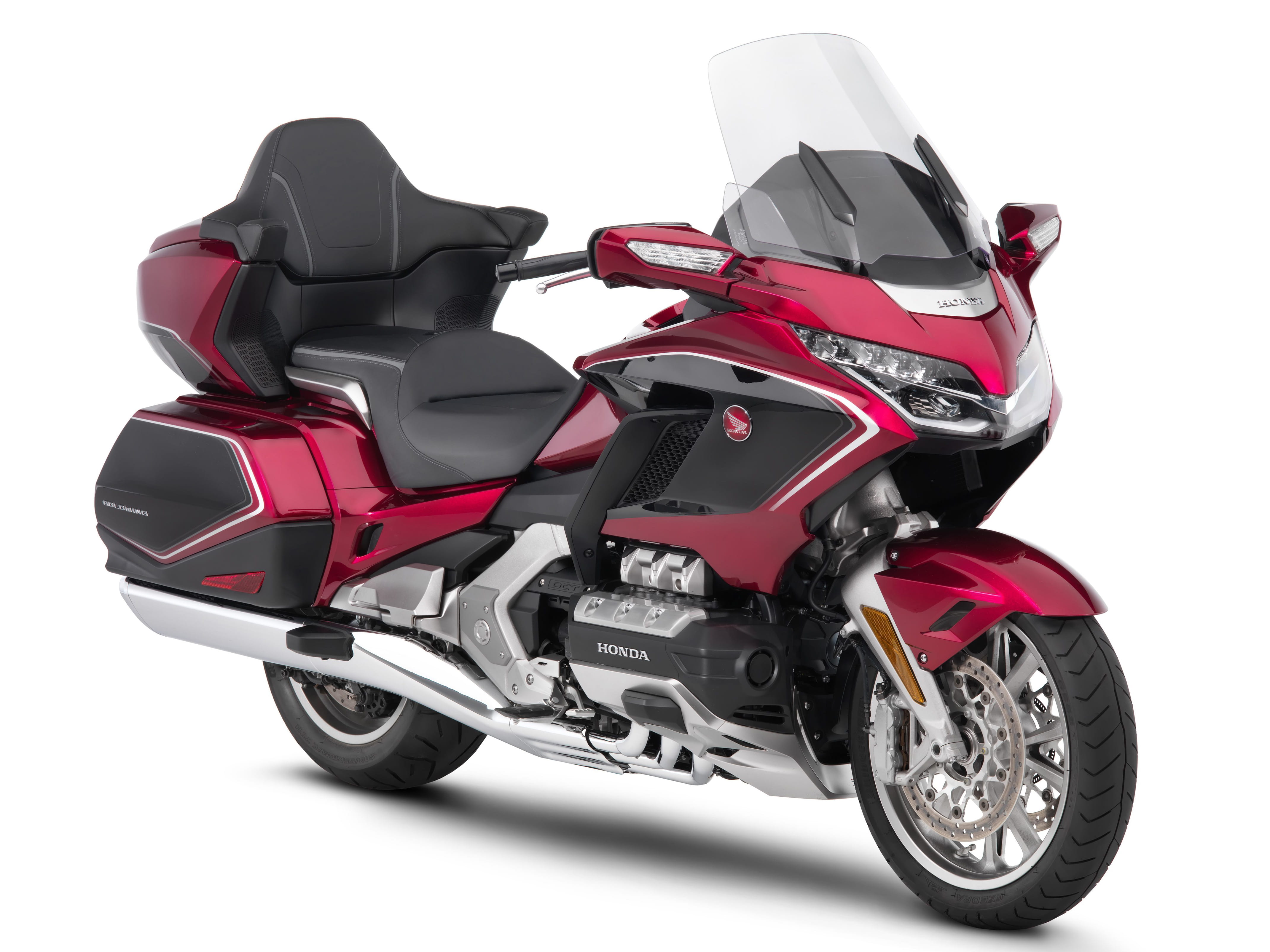 Were there any compromises you had to make?

There was no compromise – it was a change of direction. It’s important to understand that the Gold Wing basically had everything. It was like living in a house – there was no wind hitting the rider, the comfort was perfect and you couldn’t hear any sound. That somehow made the bike a little bit boring. You’re riding a motorcycle, not sitting in a house or driving in a car, so we wanted to express all the positive emotions when riding. 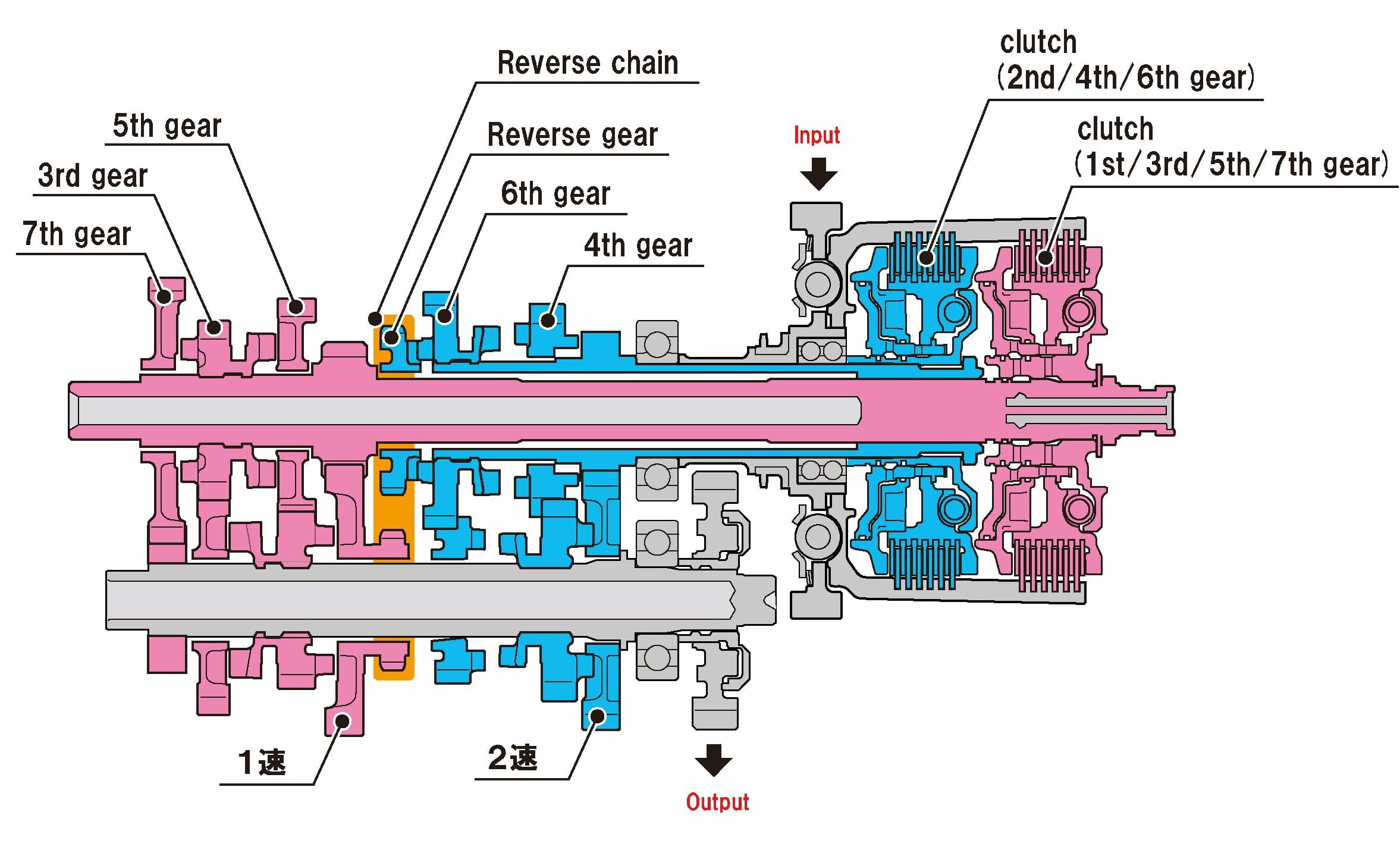 Why did you choose to build a seven-speed Dual Clutch Transmission?

Although we have slightly changed the direction in terms of concept, a Gold Wing is still a Gold Wing, so it needs a very smooth ride. The seven-speed DCT allows us to have a closer ratio for a more seamless gear shift.

Why the 1cc increase in engine capacity?

The aim was to make the bike a slim design, which of course brings benefits to manoeuvrability, so what we actually did was to decrease the bore pitch – the distance from bore centre to bore centre. The cylinder wall is smaller, but we also reduced the bore size and increased the stroke. As a result, when calculating the engine capacity, the new size is 1833cc. It wasn’t our intention to increase the capacity. 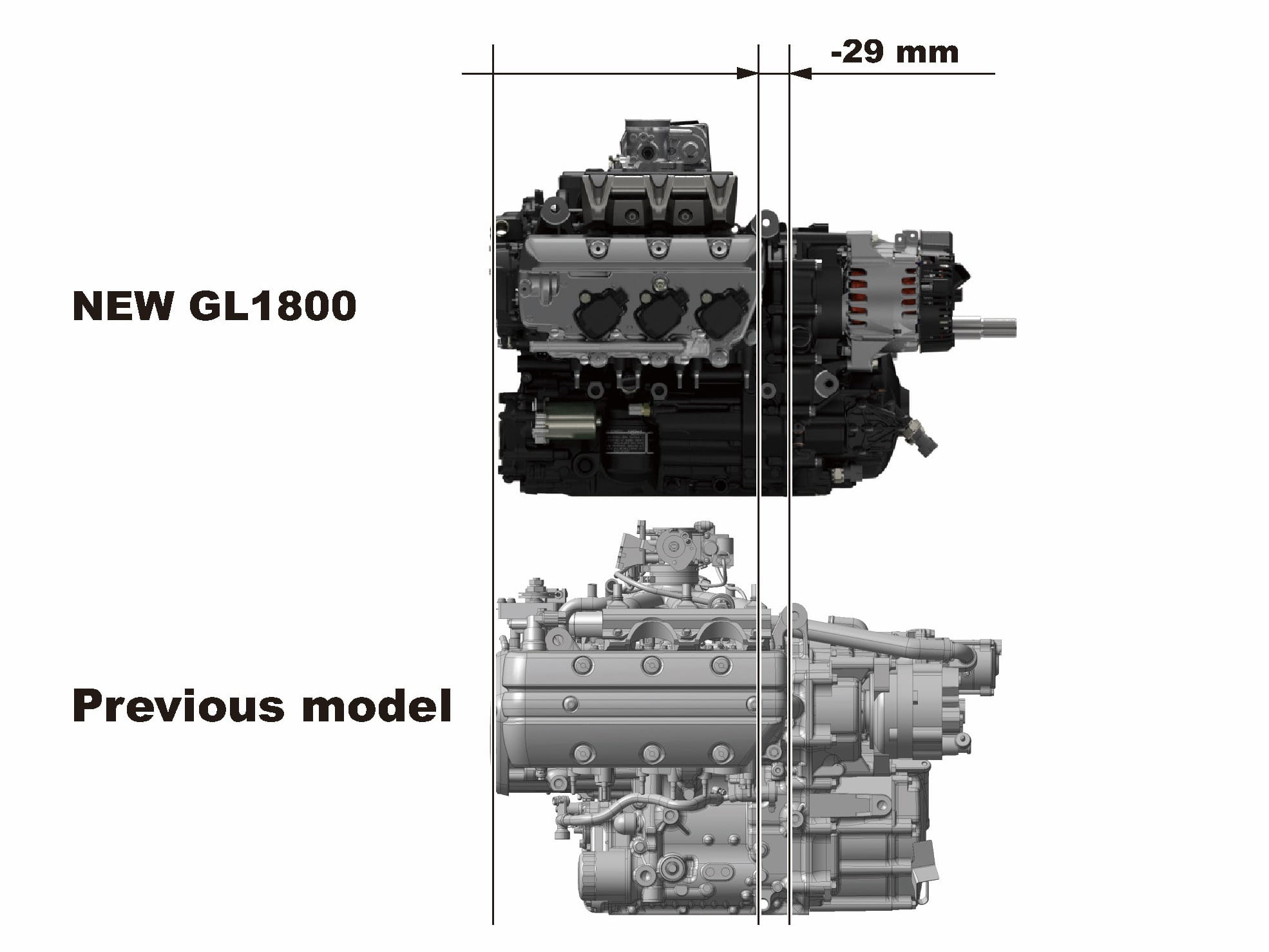 What we wanted to do was not develop a motorcycle that’s achieving high top speeds like 200km/h plus – that’s not a something you’d usually use, so we didn’t want to sacrifice the practical areas for that. We made the design sleeker, which resulted in a slightly smaller radiator – with the current heat management, the bike is capable of running at 200km/h, but if you really want to focus on that top speed you’d probably have to sacrifice other areas, which we thought were more important. We wanted to really maximise the areas in which the motorcycle was designed to be useful.

Presumably you have to consider every eventuality – if someone was fully loaded and flat-out on an autobahn for instance.

Yes. This is also one of the aspects that links to us dismissing our status of being a ‘king’. If you’re a king, you have to cover everything, which also means you have to cover maximum top speed, but that would mean you had to make the bike heavier, wider, bigger… less joyful to handle. That is exactly what we didn’t want – we didn’t want to compromise the handling in a practical speed range where you’d normally use a motorcycle. 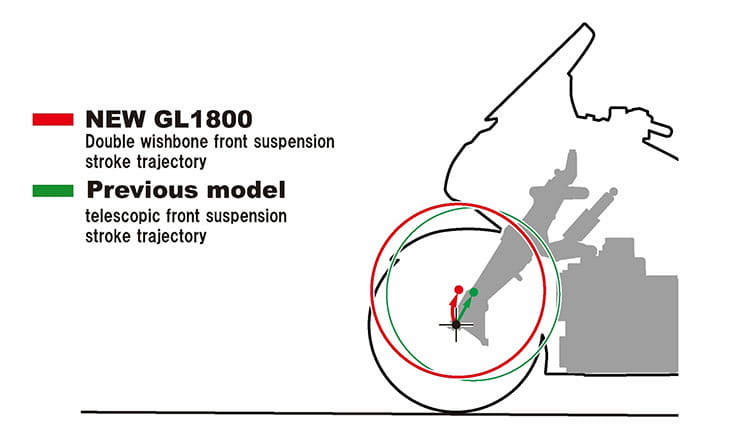 Using a wishbone suspension setup means the wheel moves upwards, rather than diagonally back

The front suspension is quite unique to Honda – can you tell us more?

Our aim was to bring the rider more forward, which has a big benefit in that you can design a smaller cowl; the further back you sit the larger the cowl needs to be to protect the rider from the wind, and that of course brings drawbacks in aerodynamics, handling, noise… everything.

Our aim was to design a small cowl, which meant bringing the rider forward. This seating position is determined by the location of the cylinder head, which is part of the reason we wanted to make a more sleek engine.

Is there any other technology in this bike that you’re particularly proud of?

There are many technical aspects I’m really proud of, but if I had to pick one it’d be the suspension. We tried many different types of suspension layout, and normally you have to go through a very complicated evaluation process – from safety and homologation aspects and so on – but once we’d made a prototype of this suspension my deputy and I just went down to the bike and rode it around the block; straight away we said “This is a really nice ride, we need to make this into a product!” 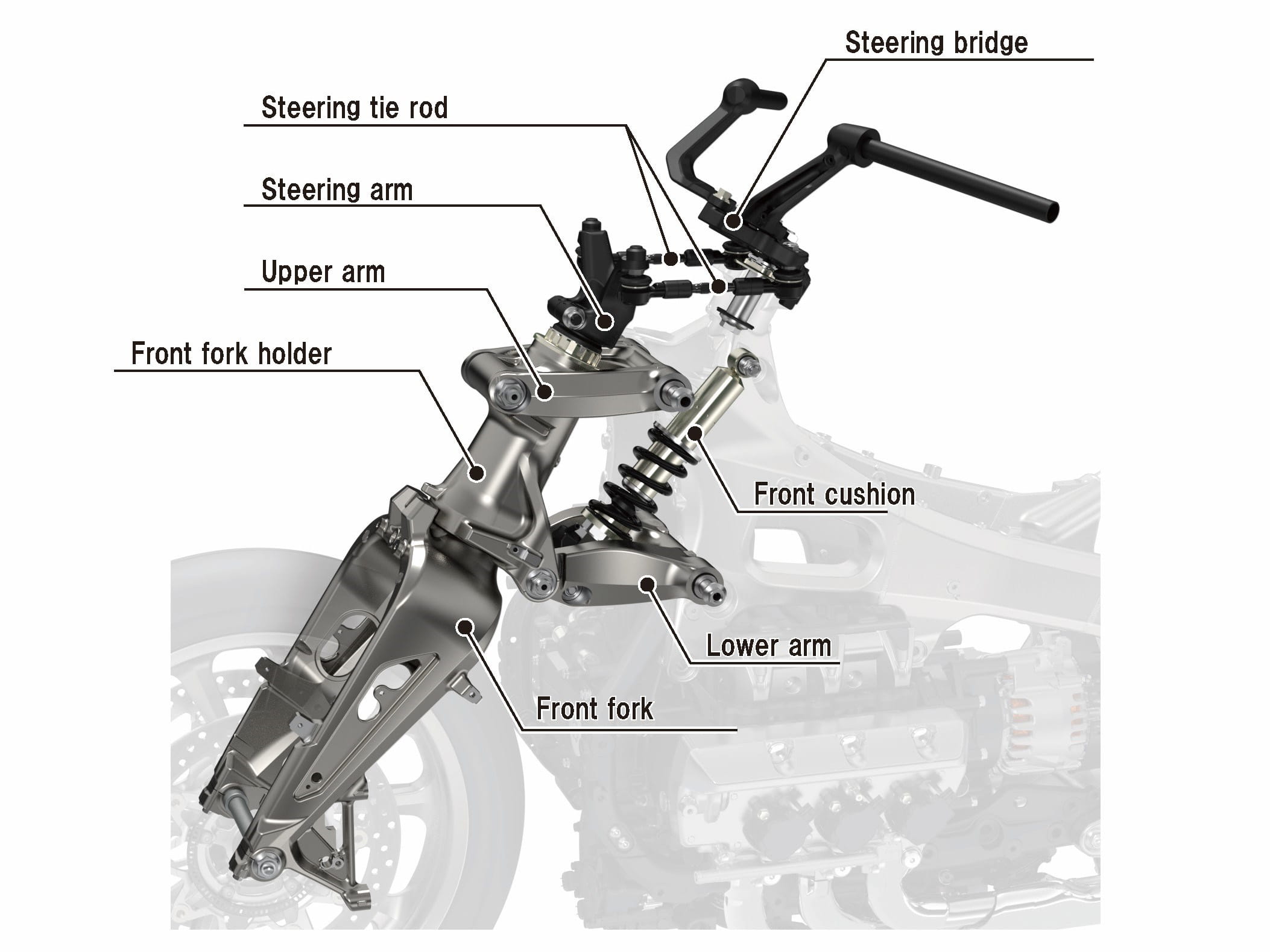 How does the system compare in weight to a telescopic fork?

It does have a slight disadvantage in weight overall, but the increase in performance more than makes up for this; comfort is much better, as is the handling, because you can separate the suspension stroke axis and the steering axis – you have much less kick-back to the bars.

By separating both axis, you can have the bars quite close, with a very natural movement. Also, the inertial weight of the suspension is lower, which gives better response, feeling and manoeuvrability.

Do you think we’re likely to see it on another Honda?

Let’s see – it of course depends on the concept of the motorcycle. For the Gold Wing, it was one of the best solutions we could find. Maybe it will be applicable, but this is something we’ll need to see. 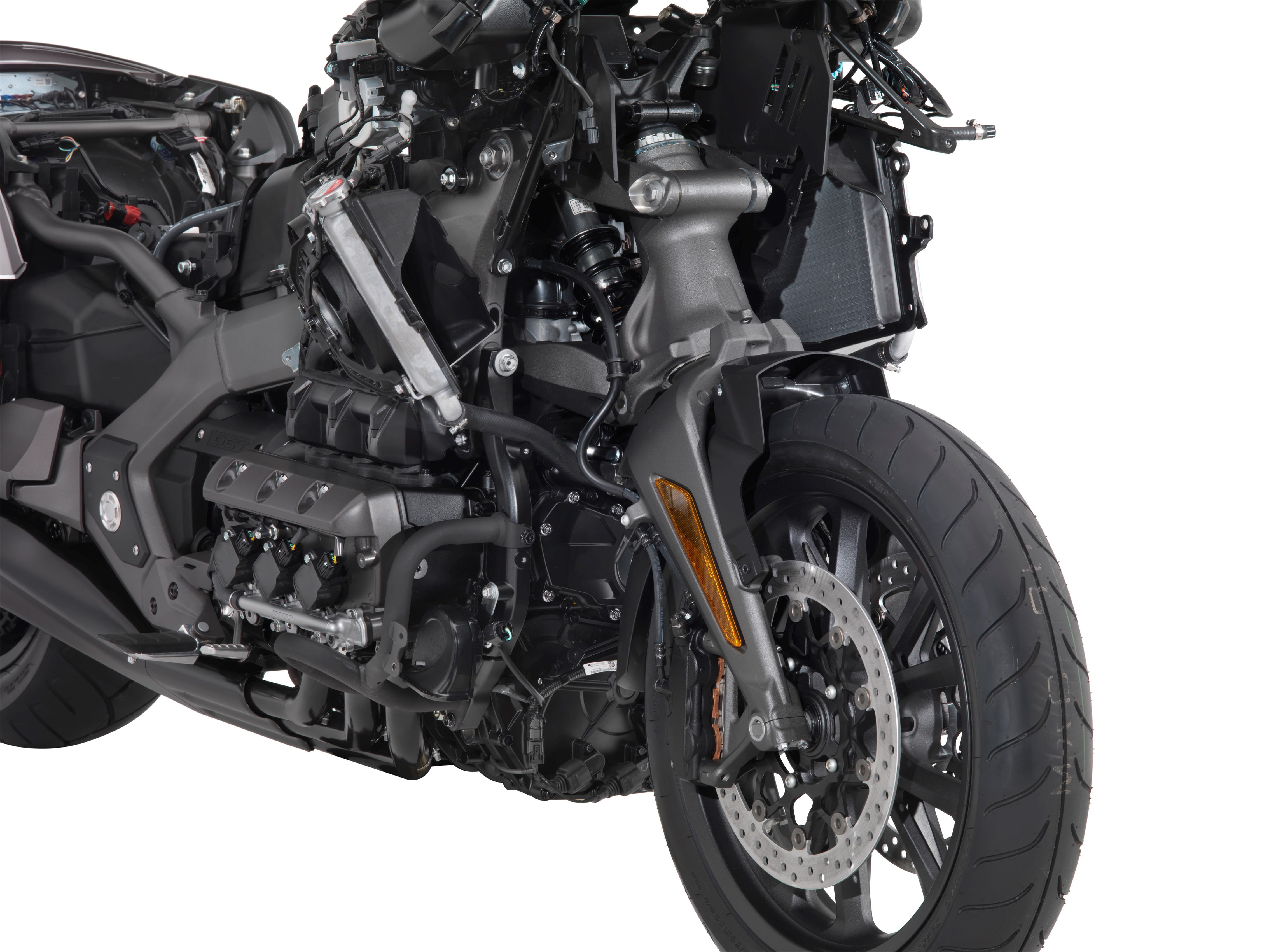