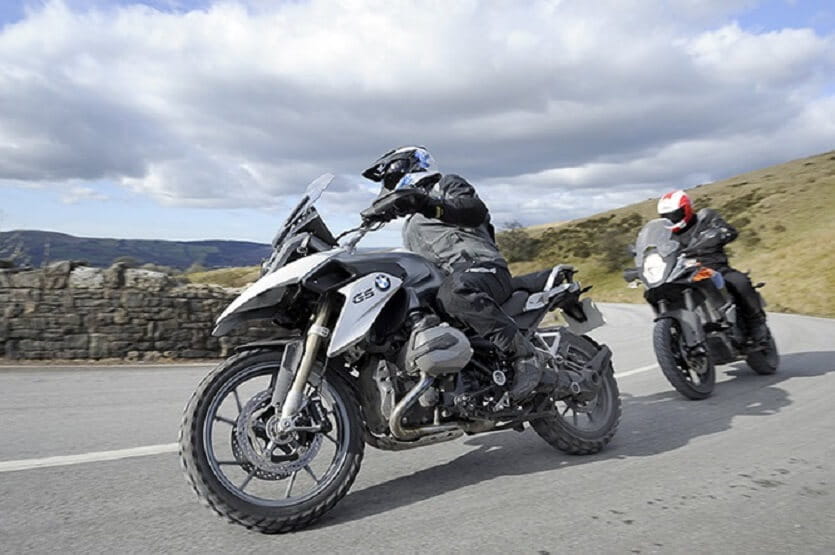 A brief history of adventure bikes

Adventure motorcycles, or dual-purpose bikes as they have also been known, are motorcycles that can be ridden both on and off-road. The bikes are equipped with features including lights, speedometer, mirrors, horn and muffler and can therefore be registered for road use. However, the versatility of adventure motorcycles means that they can also be taken for a spin off the beaten track.

Dual-purpose bikes were first seen in the early 1900s, when the majority of public roads were unpaved. Early motorcycles, or motorised bicycles, had to be built to withstand this uneven terrain. By the Forties, most roads had been paved and motorcycles had become much heavier and more suitable for street conditions. However, throughout the Fifties and Sixties, British motorcycle manufacturers including Triumph, tried their hand at producing lighter versions of motorcycles, so-called scramblers.

In 1968, Yamaha introduced the DT-1. The machine, which was based on a 250cc two-stroke engine and was particularly suitable for off-road riding, proved to be hugely popular, and prompted other manufacturers to follow suit with their own lightweight enduro machines.

While this new breed of “enduros” were good on trails, they were only just adequate on paving. Over the next 20 years, motorcycle manufacturers looked for the perfect combination of weight, durability and performance to suit all terrains, until Suzuki introduced the DR350 in 1990 – its first DualSport machine. Since then, all the major motorcycle manufacturers have produced their own versions of adventure bikes, including Aprilia, BMW, Honda and Kawasaki.

Most recently, the adventure motorcycling genre has been made popular by the Long Way Round TV series starring Ewan Mcgregor and Charley Boorman. Bikes including the BMW R 1150 GS Adventure ridden by the duo in the series are designed to tackle some of the toughest terrain and are well suited to long-distance riding.

The range of adventure bikes

There are currently a large number of adventure bikes on the market, all with varying weights, engine sizes and performance capabilities.

In general, adventure bikes come in three categories: lightweight (110-140kg); middleweight (140-160kg); and heavyweight (160kg). Lightweight bikes perform best on rough trails. Middleweight bikes have less ground clearance than the lightweights and are best suited to smooth trails and pavements, while heavyweight machines are most suitable for travelling long distances.

Because of the differing demands of on- versus off-road riding, manufacturers take very different approaches when developing their motorcycles.

The more lightweight bikes are most like pure off-roaders – powerful but with a much shorter service life and a higher level of maintenance. Manufacturers of middleweight and heavyweight adventure bikes including BMW, Honda, Suzuki and Yamaha tailor the features of their models to both on and off-road use. While these motorcycles are heavier than the bikes based on pure off-road machines, their durability means they can withstand tougher terrain and longer distances.

As motorcycle insurance specialists, we have extensive experience in providing value-for-money cover for adventure motorcyclists. We work closely with our panel of insurers to make sure that you get our best deal.

Whether you require fully comprehensive or third party-only insurance for your adventure motorcycle, we provide a number of benefits, including 90-day European Union insurance as standard in case you decide to take your bike to the continent on that adventure you’ve always dreamed of. In addition, we can offer RAC breakdown cover and helmet and leathers insurance to ensure that you’re not left out of pocket if you have an accident.

How to get a quote for your adventure bike

Getting a quote for your adventure bike is easy. Whether you ride a KTM 990 Adventure or a BMW R 1200 GS, we call upon the services of a panel of insurers to make sure you get our best deal. Simply get a quote online or contact our experienced team on 0344 209 0498 today.

Sources of interest for adventure bike owners and fans

Adventure Bike Rider – the sister website of specialist magazine, Adventure Bike Rider. Packed full of tales from two-wheel adventures across Africa, Europe and Australasia as well as motorcycle and equipment reviews and an interactive forum, this site is a key resource for anyone with an interest in adventure bike riding.

Adv Rider – an extremely inspirational and popular forum and photo gallery for adventure bike enthusiasts from all over the world.