According to some police forces’ social media, there’s been an awful lot of anti-social riding going on over the Coronavirus lockdown period. Merseyside Police have reported seizing over 20 motorcycles and making five arrests in an operation that’s seen traffic cops on bikes, in cars, utilising dog units and even police helicopters to stop anti-social riding. 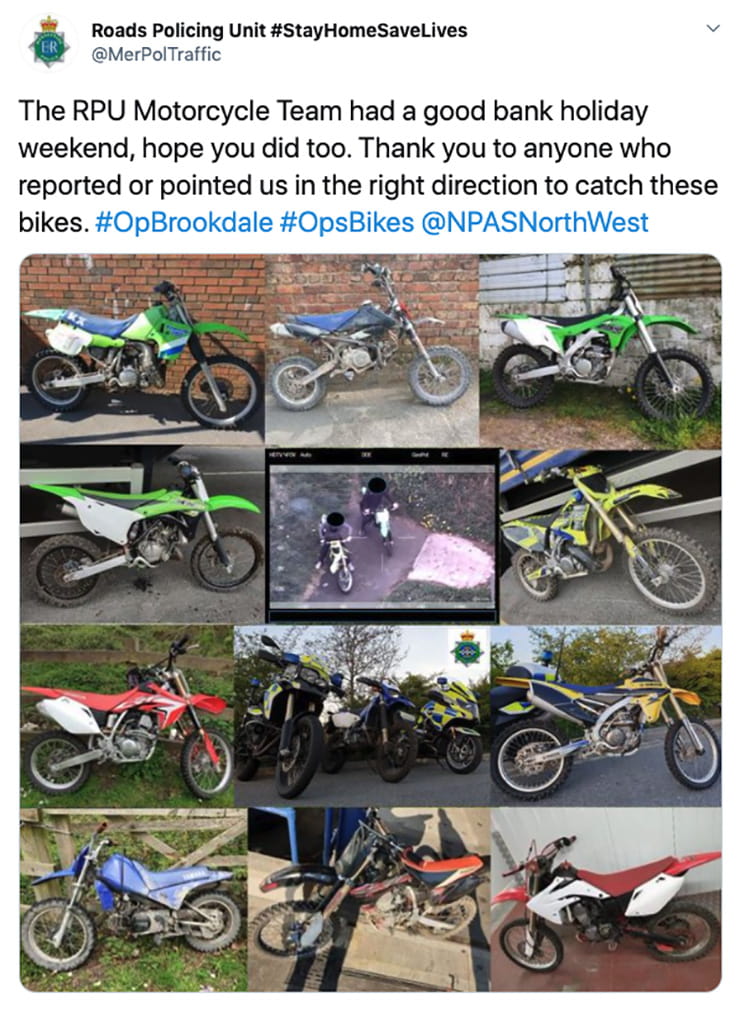 A walker was run over – suffering serious injuries – and members of the public who tried to stop the riders were threatened with a knife. A raid during the night by a group of criminals on off-road bikes also saw three factory units broken into on an industrial estate.

It’s not limited to Merseyside either; West Midlands Police ran operations against anticipated anti-social riding over the Easter break, posting pictures of scooters, pit bikes, quads and off-roaders they’d seized, along with the arrests made.

More recently, the air-ambulance had to be called to take two young men to hospital after the off-road bike they were riding was involved in a collision with a car at a pedestrian crossing, tying up valuable NHS resource.

Video from Huddersfield showed a rider, who the local press annoyingly called a motorcyclist, kicking a woman to the ground and a separate incident – also from the Huddersfield area – showed a rider taunting a cop who was on a pedal cycle.

At the other end of the scale Northants police motorcyclists showed us an incident where a rider had been trespassing on private land after taking their bike to the location in a van. 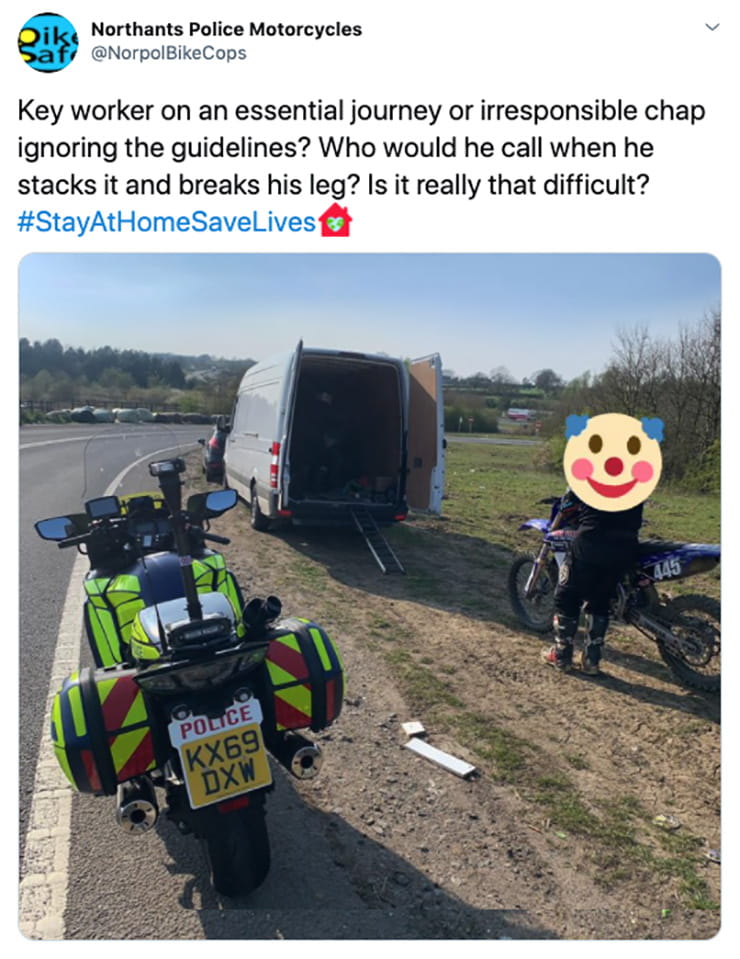 You’ll have noticed from that summary that there’s a mixture of anti-social riding and criminality, and how easily it can escalate from one to the other.

Broadly speaking, when dealing with anti-social riding there are a number of things the police can do. The first of course is to do nothing, but a lack of action only lets the issue proliferate. At the other end of the scale there’s the full tactical contact approach against criminality but there’s a lot of ground in between. You can read about the rules of police pursuit here. While it’s not proportionate for Northants Police to knock riders off their own bikes for trespassing on land, a bit of action will deter them from riding in an anti-social manner on that land again.

The importance of registering your off-road bike

As part of the strategy to combat anti-social riding I took part in an academic study a couple of years ago (while still a sergeant in Merseyside police and a tactical pursuit advisor) for Liverpool John Moores University, and while some might see this a total waste of money, it’s important that views across the spectrum are listened to.

Needless to say, I don’t like criminals stealing bikes (though some bikes used anti-socially are bought legitimately), but I also don’t like the idea of kids growing up in an atmosphere where peer pressure – or a perception of higher status and recognition among their friends – leads them into crime. When it does lead to crime though, it’s right that the police have the correct level of response to it.

It’s important that the police take positive action where anti-social riding is taking place and recover bikes, but it comes with frustrations. Across the country there will be thousands of unregistered off-road motorbikes in police compounds and here’s the thing, if your off-road bike was never registered – and there’s no requirement for a dealer to do so – then if it gets stolen the chances of getting it back are drastically reduced.

It may well be recovered by the police in an operation like the ones above, but if your bike is not on the PNC (Police National Computer) then how are they meant to find you?

If your stolen bike still has a VIN when its recovered, but it’s not on the PNC, the local force will search their own property system, but there is no national police property system for the UK.

Even though a bike may have been stolen from a neighbouring force, they won’t know.

Fortunately, you can register your off-road bike on the PNC and it’s free; just tell the DVLA who you are, where you live and give them the details of your bike’s engine and chassis number. They will assign a Q registration number to your bike and place it on the PNC. You don’t have to physically put a registration plate on your bike, and because you’ll have declared that you’re not going to use it on the road at all, you won’t have to tax it or SORN it, and neither will the DVLA send you any reminders. It’s just on the system as a failsafe and if you sell it, you just transfer ownership as normal. You can download the DVLA document to register an off-road motorcycle by clicking here.

Even with a registration number though, it still won’t be able to be ridden on any road (and that includes green lanes and byways) but it does help the police trace the owners of stolen property and get it back to them, rather than a bike being crushed. Or worse, being returned to an anti-social rider because the police can’t prove it’s stolen. I know some police forces routinely scan recovered bikes for property marking systems like Datatag – the recognised scheme for the Motorcycle Industry Association – and like the PNC records, this can be updated with new ownership. SelectaMark also offers a Secured by Design marking kit specifically aimed at off-road motorcycles.

Schemes like ‘lock chain cover’ and the motorcycle industry MCIA Secured scheme are all about layering security to deter thieves, but If you’ve been the victim of a crime – especially one where there’s a financial impact on you as a lot of off-road bikes aren’t insured – wouldn’t it be nice to get your property back?

Bennetts Rewards members can save up to 35% on motorcycle security products by visiting rewards.bennetts.co.uk and using the exclusive discount codes.