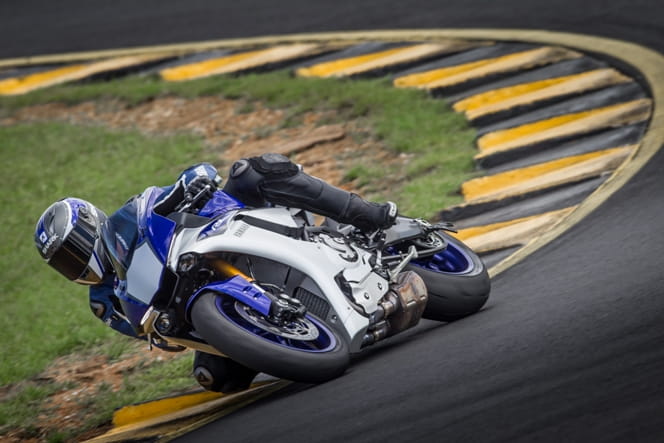 The waiting is finally over and the big question can now be answered. Is the new R1 any good? Well, despite the weather doing its very best to dampen the situation, the rain clouds eventually parted over the Eastern Creek circuit in Australia. Four dry sessions on the R1 later and I’m not only aching like crazy, I’m genuinely stunned just how good this machine is. Although should I be that surprised? This is the company that brought us the YZR-M1…

And that’s the key to the new R1. It isn’t just some re-hash of the outgoing model, it shares more of its DNA with Valentino Rossi’s bike than the old R1 and that’s what makes it so special. Well, that and hefty does of electronic wizardry. But more of that later. 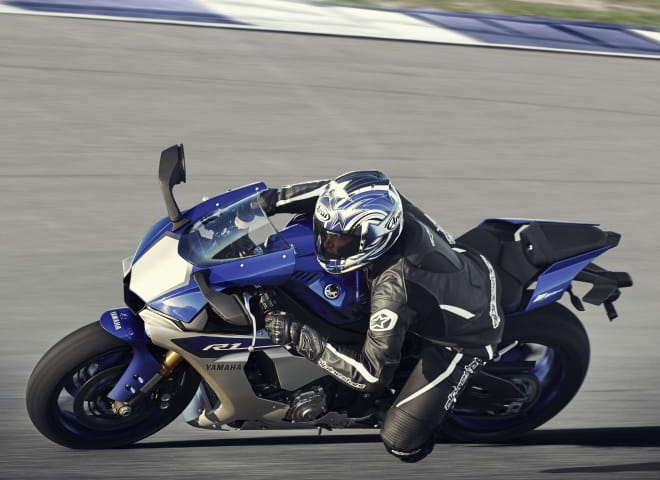 When you sit on the new R1 the first thing that strikes you is just how small it is. It’s supersport 600 small and when you glance down at the LCD dash and uncluttered cockpit area it looks and feels like a race bike. Just one with more buttons on the bars!

Fire the engine up and the off-beat note now has more of a sense of urgency, a feeling that is certainly translated to the back wheel. Although retaining that deceptive sense of acceleration that you get with the crossplane motor when compared to a conventional inline four, the new R1 engine is now seriously fast as well as grunty. With the assistance of the excellent quickshifter, I was easily hooking top gear along Eastern Creek’s main straight before grabbing the brakes and attempting to be brave into the seriously fast fourth gear left at the end. The engine isn’t ‘oh my god’ fast like an S1000RR, but that has never been what the R1 is about. It’s certainly fast and powerful enough for road or track riders and is so flexible and easy to use it helps rather than intimidates the rider. But the Yamaha’s real key is the electronic assists, which make the average Joe feel like Rossi. 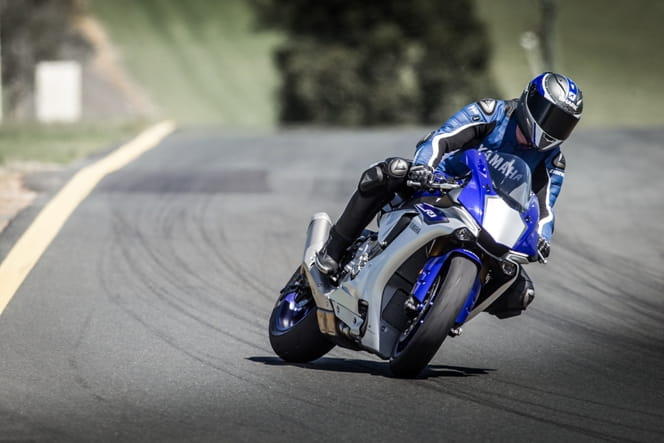 The electronics are mind-blowing

It’s hard to put into words just how good the electronics are on the R1. Yes, the bike’s chassis is impressive, ultra agile and stable when lent over, but the electronics are mind-blowing. The R1 is the first bike I’ve actually been 100% happy to completely trust the assists and focus all my attention on where I’m going and when to hit the brakes. When you approach a bend you can hammer the brakes as hard as you dare and the unified brakes with their ABS keeps it all nice and controlled (braided lines are now standard, which gives a nice solid feel at the lever). Reach your turn in point and you can even drag a bit more brake mid-corner if you please, the ABS will deal with any issues. Hit the apex, nail the throttle wide open and hang on while the traction control, slide control and wheelie control do their stuff. It’s honestly that easy. This is point and squirt motorcycling and turns an average rider into a very fast one.

If you want to split hairs the wheelie control is a touch intrusive, the rear likes to slide and if you hit a crest the front can get a bit lively, but to ride this bike quickly around a track all you need is 100% trust in the electronics. Would I try without them? Not a chance, it would be bloody terrifying and that’s why they are there!

The R1 is the most eagerly awaited bike of 2015 as a lot of people have a great affinity for this machine due to the fact it changed the game back in 1998. The new R1 isn’t a game changer in the same sense as the original bike due to the fact the S1000RR and Ducati Panigale have a similar level of technology, however it has brought Yamaha right back in the hunt for top honours in the superbike class. For me the big eye opener was how easy it made going ridiculously (for me) fast on track. When I relaxed and trusted the R1’s electronics (as well as the excellent Bridgestone RS10R tyres) it opened my eyes to a whole new level of riding that I wasn’t sure I had in me. For me that’s what made it so impressive.

And the R1M is even better… 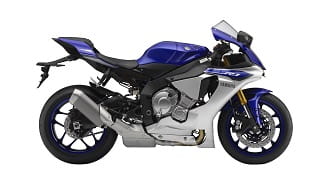 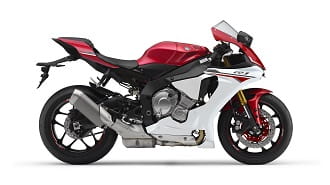 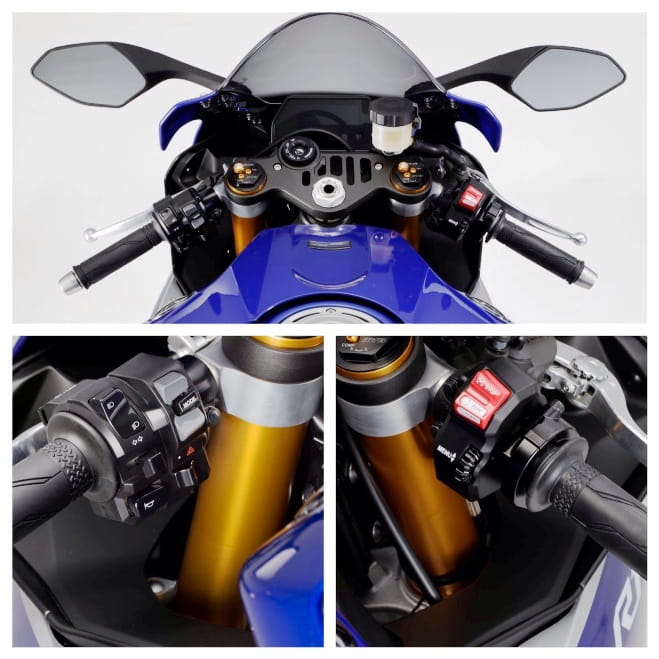 And now for something outrageous:

Ok, bad new to start I’m afraid. Yamaha UK are only bringing in 75 YZF-R1Ms and they have all sold out. In fact, they sold out in less than two hours a few months ago. Does this make reviewing the bike a bit pointless? Not really, some are sure to pop up for sale and another batch will arrive next year. It’s not a limited edition model, it’s just that demand has far outstripped supply. Should you be cursing the fact you missed out on getting one? Not totally, as you have already hopefully read the stock R1 is stunning, however the R1M is even better. Sorry… 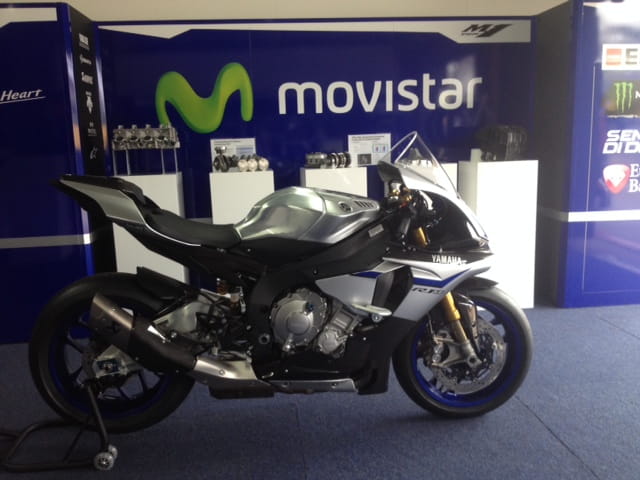 The R1M’s big selling point is its semi-active suspension, developed by Yamaha and Ohlins over the last three years. While semi-active suspension is nothing new (both the S1000RR and Panigale have it) the combination of the new R1’s chassis and the semi-active Ohlins is pretty special. Riding with semi-active suspension gives you near perfect suspension under every circumstance and the system on the R1M calculates 120 times a second using data from the R1’s IMU (brain) what the bike is doing and reacts accordingly. In practice this means when you hit the brakes the front is nice and firm, when you nail the throttle the rear digs in for grip and when you encounter bumps mid-corner the suspension is supple. On track it is impressive and takes the R1’s already excellent handling to a new level, however I suspect where it will really shine will be on the road. But here is the really cool part. Electronic suspension is still banned in WSB and MotoGP racing, so technically the YZF-R1M is more advanced than Rossi’s bike. 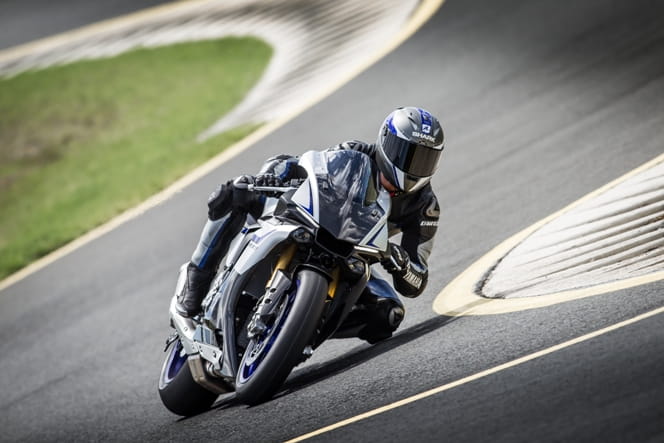 Got your eye on a new R1? Or do you own an older model?